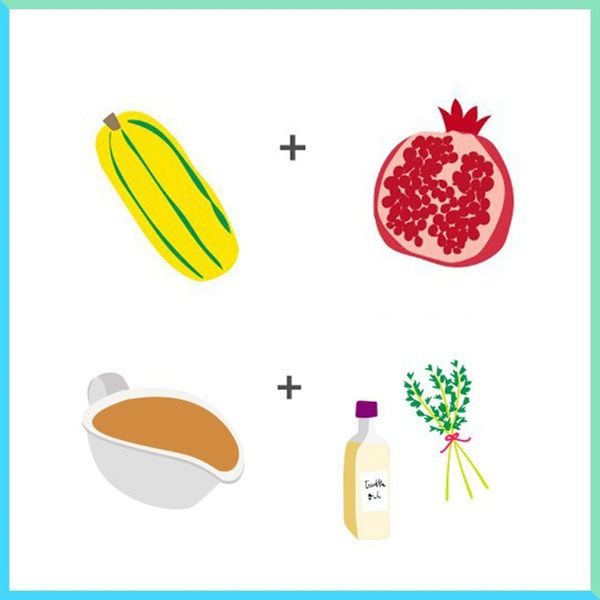 You’ve studied up on how to masterfully cook your Turkey, found the *perfect* wine to complement all of those savory fall flavors and put so much love into your (basically) from-scratch desserts. But in the build-up to your home-cooked Thanksgiving dinner, you dropped the ball on jazzing up the sides. Not big-ticket items like stuffing or sweet potatoes — those are just as if not *more* important than the big bird — but those sides that tend to slip under the radar anyway, like mashed potatoes (you’ve made them 100 times before), Brussels sprouts (just add bacon… again…) and roasted veggies (herbs are always your go-to Hail Mary for this batch). Sure, they’ll make it to the table, but will they make it onto people’s plates? Chances are they might not unless you turn it up like a chef.

Why this combo works: “The textures are very different — the squash is roasted to have a nice deep caramelized flavor and the pomegranate seeds are the tangy pop on top. Also, the color combination looks great: orange, brown + red!”

How to make it: “Cut the squash in half lengthwise. Take out the seeds with a spoon and slice the squash into half moons about 1/2-inch thick. Toss with oil and salt and roast hard in an oven. Cool squash and season with pomegranate seeds, black pepper and lemon if you like.”

via Sondra Bernstein, Owner + Chef at The Girl and The Fig, Sonoma

Why this combo works: “The texture and the saltiness of the ricotta salata adds a nice extra flavor boost.”

How to make it: “Couldn’t be easier than shaving some good quality ricotta salata over steaming hot squash before serving.”

Why this combo works: “Probably one of my all time least favorite Thanksgiving accompaniments growing up were Brussels sprouts. Boiled and funky. What l learned later in life is that done right they are absolutely delicious. The secret being the cooking technique and the addition of pork, usually bacon (not really a surprise). Having a Mexican restaurant chorizo became that perfect complement. A semi-familiar flavor for most, but in an unexpected setting.”

How to make it: “There are two equally delicious ways to prepare them. First start with one small link of Mexican chorizo (about two inches each), remove casing and cook over low heat until it breaks down. Set aside. Cut four cups of Brussels sprouts in half, take a paring knife and cutting out the core. Put the cut Brussels sprouts in the deep frier (if you have a fryer at your disposal). Cook until crispy and tender. Remove and strain. Place in a bowl and toss with salt to taste and then add chorizo. Stir until incorporated. Serve.

“The other way is to cut sprouts in half and core, then cut in 1/4-in strips. Take the cooked chorizo and add a tablespoon oil and heat over medium flame. Add sliced Brussels and sauté until tender. Add salt to taste. Serve.”

Why this combo works: “Cauliflower can be a bit bland by itself or when steamed. Roasting it intensifies the flavor, which becomes nuttier and more umami. It pairs very well with whole cumin seeds, which add an earthy flavor that remains distinct without overpowering the dish.”

How to make it: “Preheat the oven to 450ºF. Then toast about a tablespoon of whole cumin seeds in a hot, dry and oven-safe pan for about 30 seconds on the stove or until fragrant. Remove the cumin seeds from the pan and set the aside. Next, get the pan very hot and add enough butter to the pan to coat the cauliflower and stir until melted. Add the cumin seeds, cauliflower, salt and pepper and stir so that the cauliflower becomes coated by the butter. Turn off the stove and put the pan on the top rack of the oven and bake for about 15 minutes or until the cauliflower has become colored. Finish it with fresh lemon juice.”

Why this combo works: “Truffle oil and/or thyme adds a little luxury and unexpected depth to a Thanksgiving mainstay.”

How to make it: “Made the traditional way with pan drippings, flour, butter, chicken stock. Finished with a drizzle of truffle oil and fresh chopped thyme.”

Why this combo works: “Instead of making plain old Brussels sprouts with salt and pepper or almonds, try adding orange, lime and lemon zest with a splash of all three juices at the end to brighten up the flavors. The reason citrus goes so well with Brussels sprouts is because they are part of the cabbage family and are cruciferous vegetables. Once they’re cooked, they release a smelly odor. When you add citrus to the sprouts prior to cooking, it helps alleviate the odor and gives them a bright smell and even better taste.”

How to make it: “At home, use a microplane to shave some fresh citrus zest onto the Brussels sprouts. Add a drizzle of grape seed oil, salt, pepper and toss well. Roast at 375ºF for 15 minutes and BAM! You have yourself some spruced-up, tasty Brussels sprouts!”

Why this combo works: “This is a tribute to my Jewish heritage, a take on the classic bread/sausage stuffing.”

How to make it: “It’s prepared the same way as classic stuffing, but with matzoh replacing the bread. It’s toasted, crumbled in a pan and covered with a sauce of diced pastrami, onion, celery, dried apricots, chicken stock and butter.”

Why this combo works: “Mashed potatoes by themselves aren’t very exciting or flavorful, and I always find myself drowning them in gravy. I spike creamy mashed potatoes with wasabi to pack in a ton of flavor and contrast.”

How to make it: “Mix a couple teaspoons of wasabi into your favorite mashed potato recipe. I like mine with heavy cream, sour cream and a few cloves of garlic.”

Why this combo works: “Sriracha sauce, and Vietnamese food in general, are really trendy right now. But to make the leap to your Thanksgiving table, you need a little sweetness. The honey accomplishes that and pairs well with our earthy American staples: butternut squash, chestnuts and Brussels sprouts. The mint added at the end brightens the whole dish and is also a little unexpected. All of it together is a nice counter-balance to roast turkey and stuffing.”

How to make it: “All of the ingredients can be found in most grocery stores nationwide, and it is only a few. Roasted, halved Brussels sprouts, cubed butternut squash and roasted peeled chestnuts. Mix together a little sriracha and honey — make it spicier if that’s what you like — toss with the roasted vegetables and finish with mint and a little lime juice. (PS: All of it can be made ahead and reheated).”

Why this combo works: “Cranberry sauce can be a little bitter and boring all by its lonesome. Adding ginger gives it a kick of spicy heat perfect for fall.”

How to make it: “In a saucepan, combine four cups of fresh cranberries, 1 1/2 cups of sugar, 1/2 cup of cranberry juice, zest + juice from 1/2 an orange and 1 teaspoon of fresh grated ginger root. Bring to a simmer and stir until the cranberries have popped and the mixture becomes saucy (about 15 minutes). Transfer the sauce to a nice serving bowl and refrigerate until completely cool. Enjoy!”

Why this combo works: “This is a recipe that I continue to make every year for Thanksgiving in memory of my father-in-law. At first it reminded me of one of those recipes you’d find on the side of a can of cream of mushroom soup, topped with crispy onions, but it soon revealed to be delicious. The vanilla naturally emphasizes the sweetness of the English peas and its aromatics blend great with sage.”

How to make it: “You start by making a simple loose béchamel. Add a teaspoon of vanilla (bean if you got it, but extract will do). Add some fresh chopped sage and English peas and cook until peas are tender and béchamel has thickened, not too thick but not too runny. The mix should be about 80/20, 80% peas and 20% béchamel. Slice some onion very thin, whole round rings (think onion rings, but thinner). Toss the onions in flour, salt and pepper. Shake them in a flour sifter to remove excess flour and drop them into oil (350°F ) then fry until golden brown. Strain on some paper towels to remove oil and serve over your creamy English peas.”

What’s your twist on a favorite Thanksgiving side? Let us know in the comments below!