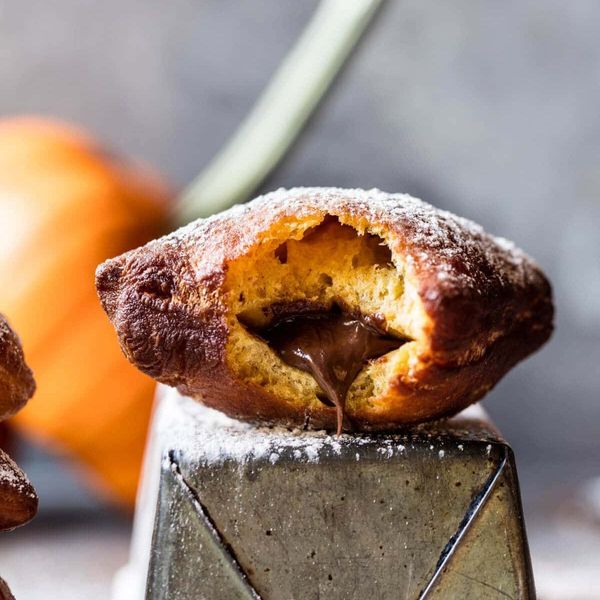 It's 2020; changing up Thanksgiving staple dishes is totally cool. The time is now to serve stuffing cups and mashed cauliflower puree, but do you dare go beyond the classic pumpkin or apple pie? The answer is yes. You can always opt for pumpkin pie alternatives. Or, if you'd rather skip the pies altogether, here are some Thanksgiving desserts that break the mold and taste delicious while doing so.

Pumpkin Pie Spiced Toffee: Don't want leftovers? Make a dessert that's easy for people to take home in bags, like this crispy pumpkin-spice toffee. (via Brit + Co)
Pumpkin Pie Brownies: Boxed brownie mix gets a gooey upgrade when layered with pumpkin, cream cheese, and warming spices. (via The Cookie Rookie)
Baked Churro Chips: These healthy-ish churro chips pair oh-so-well with your end-of-feast espresso. Serve them with multiple dipping sauces for a shareable treat. (via Brit + Co)
Nutella-Stuffed Pumpkin Beignets: Reason 8,453 why Nutella makes everything better: these plump and pillowy pumpkin beignets. Your guests will love the look of the powdered-sugar-dusted wonders, but they'll really freak out when they take a bite from the gooey center. (via Half-Baked Harvest)
Goat Cheese Cheesecake With Honey-Cinnamon Apples: Turn your favorite charcuterie-board combo into dessert with a rich and sweet goat cheese filling, sliced apples, and honey-cinnamon syrup. (via Food Faith Fitness)
Pumpkin Cake With Cream Cheese Frosting: When there's a crowd, you can't go wrong with a sheet cake. (via The Recipe Critic)
Apple Dumplings With Sparkling Apple Cider Sauce: Sparkling apple cider, butter, and brown sugar form a sticky sauce when baked with soft apple dumplings. If you listen closely, you can practically hear the dumplings begging to be heaped with ice cream. (via Sweet Cayenne)
Glazed Buttermilk Donut Bundt Cake: Why buy a dozen donuts when you can make a giant one? This unique cake is made with oat flour, buttermilk, and nutmeg. (via The View From Great Island)
Nutella Gooey Butter Cake: It's only logical to end an extremely large meal with an extremely rich dessert. (via Spicy Southern Kitchen)
Apple Fritter Bread: Here's a five-ingredient dessert that won't let you down — and it even has fresh fruit to boot. (via Crazy for Crust)
Baked Pumpkin Churros: When churros and hot fudge are involved, there will always be room for dessert. (via Cooking Classy)
Rum Cake: Few things are better than a moist and boozy bundt with a buttery sauce. (via Averie Cooks)
Caramel Apple Crisp Bars: Love apple crisp but don't love doing dishes? These squares pack plenty of apple, butter, and cinnamon and make great finger food. (via Pinch of Yum)
Pumpkin Roll: If you want a recipe that doubles as dessert and a centerpiece, go with this pumpkin roll, which looks complex but is beginner-friendly. (via The Recipe Critic)
Nutter Butter Acorn Cookies: If kids are on dessert duty, they'll love dipping Nutter Butters into chocolate and customizing them with sprinkles — no oven necessary. (via Wondermom Wannabe)
Pumpkin Cheesecake: Gingersnap crust, caramel drizzle, can't lose. (via The Recipe Critic)
Pumpkin Spice Snickerdoodles: Pumpkin spice pairs deliciously with cinnamon-heavy snickerdoodles. (via Bowl of Delicious)
Pumpkin Carrot Cake: The veggie action doesn't have to stop after dinner. Load pumpkin with more carrot! (via Averie Cooks)
Iced Pumpkin Oatmeal Cookies: Pass a plate of these around, and they'll disappear faster than the turkey. (via The Novice Chef)

Caramel Pumpkin Magic Bars: Magic bars are proof that most sweet things are better together, and these squares of pumpkin, chocolate, and shredded coconut are no exception. (via Greens & Chocolate)