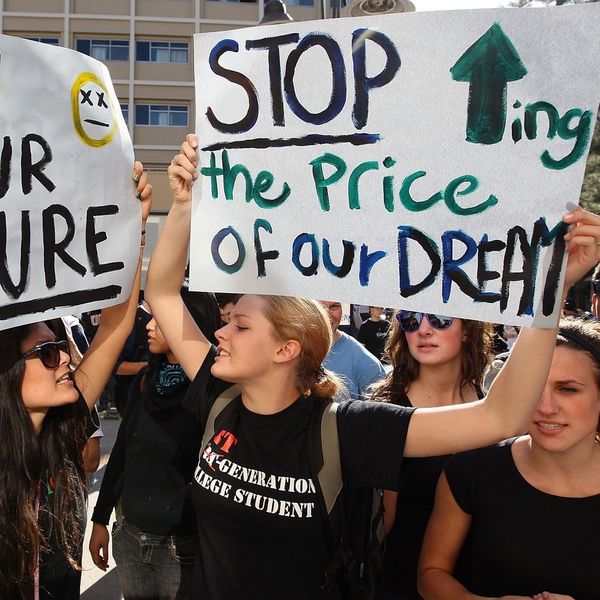 Chances are you have experienced some anxiety over the cost of college or your prospects on the job market lately. (If that anxiety is in the past tense, good for you, girl!) This is the first election cycle in a long time in which politicians are talking about some of the less popular measures that could improve life, for those of us who weren’t blessed with wealthy parents: cheaper tuition, higher minimum wages, closing the gender pay gap, that kind of thing. After looking at how the candidates feel about environment election issues and some other aspects of the current election, we thought we’d take a li’l peek at the candidates’ positions on economic issues. Based on the candidates’ campaign websites, what do they plan to do about some of the most pressing issues facing this generation of financially squeezed citizens?

We all know college costs are astronomical, and they’re not going down on their own any time soon. Add to that the fact that just below half of parents are saving for their kids to go to college (a number that’s been on a downward trend for a few years), and you’ve got problems for future students. Well, some of the people running for president want to make this easier on you and your offspring (or potential offspring, or friends’ offspring).

Hillary Clinton: “Ensure no student has to borrow” money for a public college in their state. (It’s unclear how, specifically, this will be worked out.)

John Kasich: As Ohio governor he championed performance-based subsidies to colleges and froze tuition for two years while schools look at ways to cut costs. (He offers no specific information on what he would do as president or how.)

Bernie Sanders: Eliminate tuition for all public colleges and universities.

Student loan debt is $1.3 trillion and growing (at a rate of about $2,726 per second). While some presidential candidates have plans to address the cost of college for future students, this gargantuan sum is one with which students and former students are already saddled, and solutions to this problem are fewer and further between. To make matters worse, it’s difficult to have your federal loans forgiven, even in dire cases like when you file for bankruptcy.

Jill Stein: The Green Party candidate favors not only making public higher education free, but also abolishing the debt already accrued by 40 million Americans. She’s noted it would be more than 90 percent smaller than the bailout offered to Wall Street after the 2008 financial collapse that they… created.

Since groups like Fight for $15 began agitating for higher pay in 2012, using single-day strikes at fast-food restaurants to raise awareness, the idea of a minimum wage people can actually, you know, live on has gone from a pie-in-the-sky ideal to reality in many cities. And while the federal minimum wage is just $7.25 per hour, 29 states and the District of Columbia have higher state wages as of Jan. 1, 2016. There’s still a lot of work to be done for the lowest-earning workers in the country, though.

Hillary Clinton: Raise the federal minimum wage to $12 and support local activist efforts like Fight for $15.

Women still, somehow, make significantly less than men do, and if that wasn’t bad enough, the stat we usually hear is actually rosier than the reality. White women make $0.77 for every dollar white men, the standard-bearer in this calculation, earn. Black and Latina women earn far less. According to the American Association of University Women, Latina women earned, in 2014, $0.54 per every white man’s dollar, while black women earned $0.63. This is obviously a huge issue for women, workers, people of color and the economy at large.

The official nationwide unemployment rate is at a nearly 10-year low of 4.9 percent, though it jumps to 9.7 percent when the underemployed and those who have entirely stopped looking for work are included. Another aspect to consider here is a term that’s become trendy in social justice and economic circles: the “precariat.” Those are workers who have part-time, temporary or otherwise insecure work. Over the past several years many of the jobs added to the economy were part-time, and they were replacing full-time jobs. Work is harder to find, and the jobs that are there are often not what people are looking for.

John Kasich: Um… he created something called JobsOhio as governor, so maybe JobsAmerica?

Donald Trump: “I will tell you this, and I can say it with certainty: I will be the greatest jobs-producing president that God ever created.” (Photo via Mark Wilson/Getty Images)

What do you think should be done to ensure the economy benefits regular Americans? Tweet us your thoughts @BritandCo!