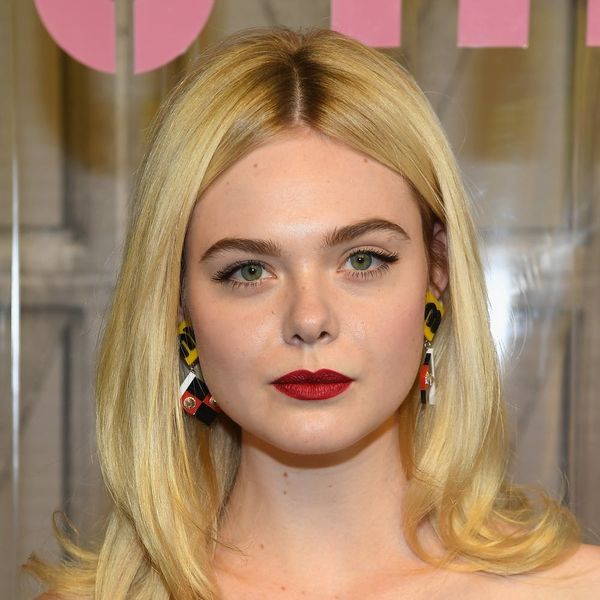 Whether it’s a curtain fringe (so hot right now!) or baby bangs, cutting the hair that frames your eyes has the power to change up your whole look. If you need an example of truly transformative bangs, look no further than Elle Fanning.

The Neon Demon actress has been rocking a perfectly centered part for as long as we can remember, but on Monday night, the 19-year-old took to the stage at the InStyle awards in LA to accept her award for Breakthrough Style Star of 2017 looking like a whole new woman.

Thank you @instylemagazine for the 2017 Breakthrough Style Star award ⭐️ a gorgeous (hot) LA night at the Getty! Happy that Marilyn and James could join the festivities @versace_official 😘 and Sam, my mother unicorn 🦄 your speech was everything! I'm still that 13 year old fangirling with you over 90's Kate and Bardot @samanthamcmillen_stylist 💇🏼: @justjenda #bangin 💄: @erinayanianmonroe #barbiegirl

“I’m still that 13-year-old fangirling over your ‘90s Kate and Bardot,” the How to Talk to Girls at Parties actress shared on her Instagram page.

It’s not hard to see the resemblance between Fanning and the French screen siren Brigette Bardot, who wore the iconic hairstyle back in her ‘60s heyday.

Elle Fanning: Bangs or nah? Tell us over @BritandCo.

Nicole Briese
Nicole is the weekend editor for Brit + Co who loves bringing you all the latest buzz. When she's not busy typing away into the wee hours, you can usually find her canoodling with her fur babies, rooting around in a bookstore, or rocking out at a concert of some sort (Guns N' Roses forever!). Check out all her latest musings and past work at nicolebjean.com.
Bangs
Hair
Bangs Celebrity Hair Hair Haircuts
More From Hair