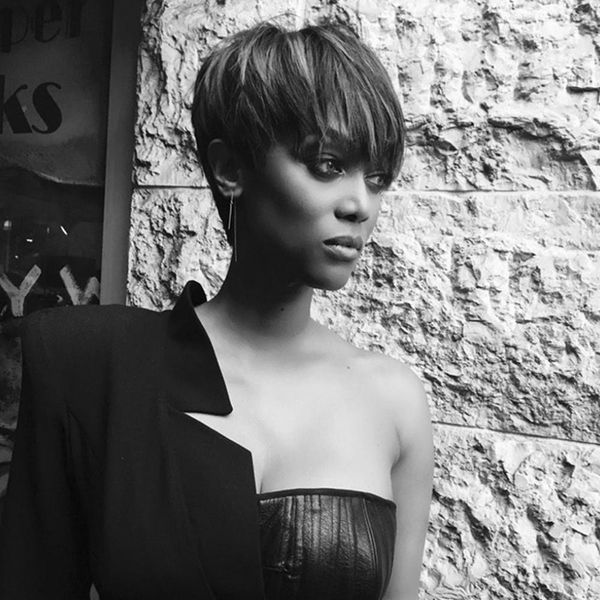 It seems nowadays whenever we mention a new haircut you can pretty much assume it’s going to be a lob. Everyone from Lauren Conrad to Selena Gomez has traded in their long locks for this cut – and we totally get it. The lob is fresh, clean and flattering on pretty much everyone. But like any trend, it’s bound to have competition at some point. Enter: the BB cut (AKA the blunt bob). Still similar to the lob, this option offered a shorter alternative.

1. Tyra Banks: The most recent celeb to chop it all off is the always entertaining Tyra Banks. Long and layered in front and super short in back, this cut definitely emulates the drama the supermodel is known for. Considering Tyra tweeted a whopping six pics of her hair, we’re guessing she’s a pretty big fan of the new look. (via @tyrabanks)

2. Lena Dunham: This isn’t Lena Dunham’s first time in the pixie game. Who can forget that epic Girls finale when she has a bit of a mental breakdown and chopped it all off on-screen? Since then Lena has been growing it out and rocking a short bob, but it looks like she missed the shorter ‘do. She debuted the look on Late Night With Seth Myers and also on her Instagram. The low-maintenance gal captioned the snap saying, “Zero prep required with my new ‘do by my hair’s soulmate.” (via @lenaduhman)

3. Lily Collins: Lily, who had already been rocking the BB cut, was one step ahead of the crowd debuting this new look back in early March. Lily’s cut is slightly similar to Tyra’s in the layering sense, but this one offers a bit more volume up top. We were already envious of those eyebrows but now it looks like we have another of her beauty traits to swoon over. (via @lilyjcollins)

Have you recently gone for a pixie cut? Share a photo with us on Twitter on in the comments below.