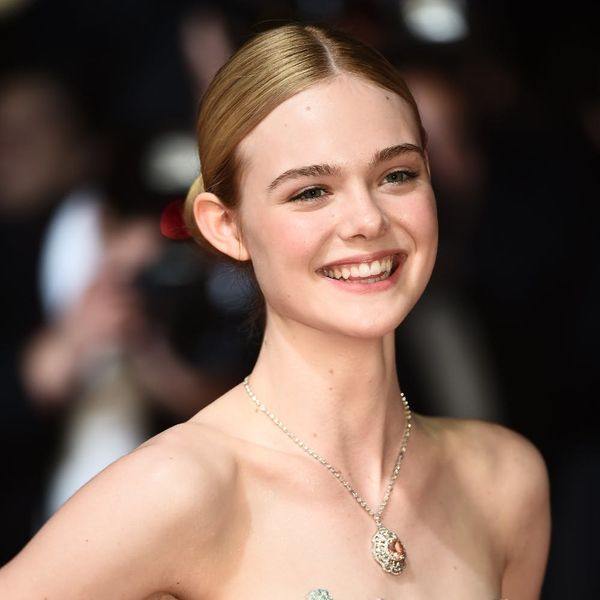 Elle Fanning stunned on the Cannes red carpet this year when she stepped out in a blush Zuhair Murad couture gown that was straight out of a fairy tale. With a corseted waist, full skirt, long train and delicate floral embellishments, it was (yet another) gorgeous fashion moment for Elle. But the young actress, while a style icon, is also an 18-year-old girl who wants to do normal teen things too. And a major teen life moment? Experiencing all of the fun of prom. Which is why Elle decided to get just as dressed-up for the teen tradition. In fact, Elle decided to wear the very same dress to prom that she wore to Cannes and absolutely slayed the look not once but twice.

Posting a pic of herself and her date on Instagram, posing on a marbled stairway, the actress added a bouquet of flowers to her look, forgoing the traditional wrist corsage. With her head turned sweetly towards her best friend, Cass, the two are showing off some seriously happy smiles. Elle added, “Reliving my Senior Prom! Thank you, @basquitwat for flying out since I could not be home and making our prom night one to remember forever! #ProminCannes #PromontheRedCarpet”

Unfortunately, Elle is referring to the fact that in order to attend Cannes to promote her role in the upcoming film Neon Demon, which also stars Christina Hendricks and Keanu Reeves, she had to miss her own high school prom back home. Her date, an apparent prince charming, flew to France so that the pair could have their own little celebration. We loved that Elle said “no thanks” to being bummed about missing prom, and recreated the night on the French Riviera instead.

Have you ever re-worn a favorite dress or outfit to different special occasions? Tweet us @BritandCo!

Desiree O
Desirée O is a ‘Professional Bohemian’ who loves anything and everything related to the arts, entertainment, and pop culture. She ADORES being a ‘Newsy’ for Brit + Co, covering all of the latest tidbits of awesomeness that you want to read about. When she’s not writing, she’s either making messy art, going on long adventurous walks with her camera, or poking around over at bohemianizm (http://www.bohemianizm.com/). You can find out about Desirée O and her work at http://DesireeO.com/ or follow her on Twitter @DesireeO.
Celebrity Style
Entertainment
Celebrity Style Prom