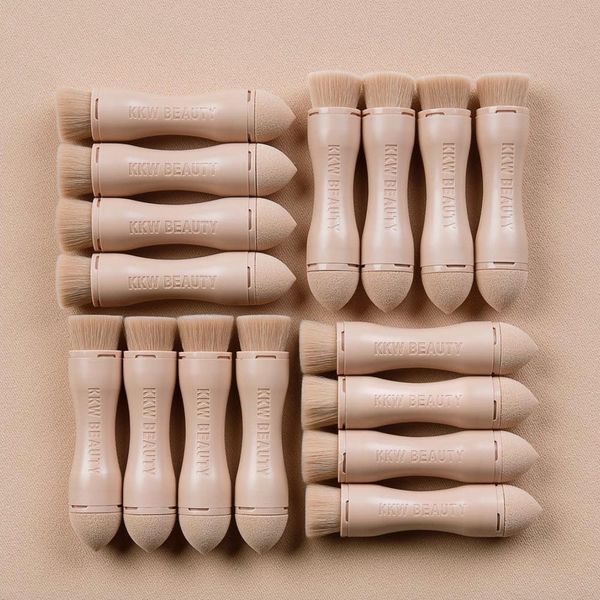 Kim Kardashian West’s makeup line, KKW Beauty, isn’t just meeting sales predictions for sales — it’s blowing the numbers out of the water. And while there are plenty of legal dupes on the market, counterfeiters have seized the opportunity to prey on beauty lovers. And West is trying to protect her fans from buying fake product by showing the differences between the real and the knockoffs.

The reality star showed a new batch of KKW Beauty products on Twitter and her Instagram Story and used the platforms to voice her concerns. She posted videos demonstrating the differences between the impostors and the real deal.

Beware of fakes!! The ONLY place to buy official KKW BEAUTY products is on https://t.co/32qaKbs5YG pic.twitter.com/ONZLUBmv34

“People are advertising that they are selling my products on a bunch of different websites and they’re using my promo photos and everything,” she explained. “Do not fall for all this fake stuff… They could potentially be dangerous; I don’t know what’s in them.”

She showed how a knockoff kit had packaging in a completely different color (pink instead of beige) and didn’t include the vacuum sealed bags that the actual thing does. Aside from that though, it is really difficult to tell the two apart, which is dangerous considering the makeup could have pretty much anything in it, and it’s not guaranteed to be safe.

West says the only way to be sure you’re getting what you think you’re getting is by buying directly from KKWBeauty.com. And now’s your chance — everything restocks tomorrow at 12pm PST.

What do you think of the PSA? Have you seen any convincing fakes? Tell us @BritandCo!

Shea Lignitz
Shea can be found in the nearest bookstore or brewery, exploring the great outdoors, or blasting Led Zeppelin. She grew up in the cold and rain of Northern California's redwoods but is currently wandering around Texas.
Beauty Products
Beauty News
Beauty Products Controversy Kardashians
More From Beauty News