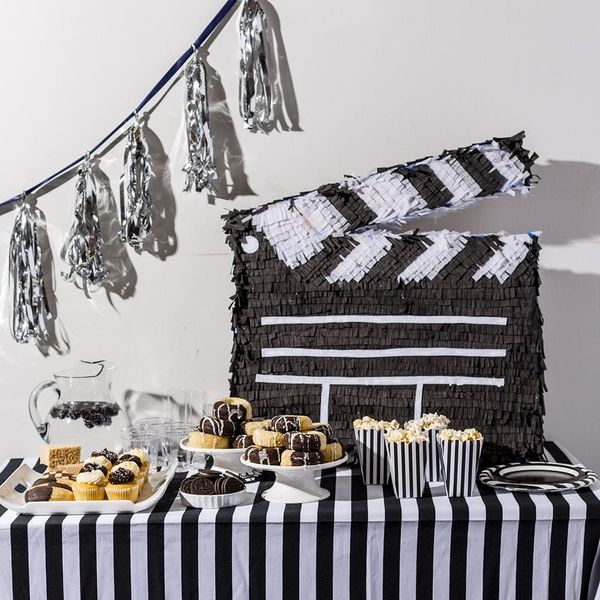 When I lived in LA, a joke I often heard was that there is only one season in Los Angeles: Awards Season. (It’s true, by the way!) I’m from Northern California, but my love for movies and the Oscars is very LA. I’m definitely that person who fills out a ballot, reads entertainment news and watches the nominated movies before the big show. Some people have Super Bowl parties, but I have Oscars parties. Any other cinephiles with me? Well today, we’re showing you how to put together an Oscar viewing party inspired by Old Hollywood film noir!

Directors of film noir movies seem to really like dramatic shadows, especially ones that cast black stripes on the characters, like in the movie poster for The Big Heat. We decided to really play up the high contrast black and white throughout the setup of our party.

Start with laying out a black and white tablecloth. Then set out treats in black and white colors. Don’t forget to hang a little sparkle on your wall as a party backdrop!

We loaded up our spread with blackberry-infused sparkling water and lots of sweet treats.

For the black half

For the white half

Instructions for the Black Half

Whisk together cocoa, flour, sugar, baking powder, baking soda and salt. Whisk together eggs, milk, vanilla and vinegar. Add this mixture, along with the melted butter, into the dry ingredients and stir until well-combined

Instructions For The White Half

Fill two piping bags with both batters. Pipe one half of a greased donut pan with the chocolate batter and the other half with the vanilla batter. Bake at 350 degrees for 15 minutes.

Once cooled, drizzle your donuts with a light glaze. We just melted down store-bought frosting to use as our glaze. Donuts, I think this the beginning of a beautiful friendship.1

Say “hello” to my little friends.2

Is a party really complete without a piñata? (I think not!) We made this guy out of cardboard, streamers and felt. Brit + Co has a lot of awesome piñata tutorials (like for this ice cream truck piñata) to follow for you to DIY your own!

Popcorn and movies are like Spencer Tracy and Katharine Hepburn, a match made in heaven! Serve your friends popcorn as they watch the show in these printable popcorn holders. For extra film-noir drama, make this black and white popcorn for the party!

You had me at hello.4

I’m ready for my close-up!5

This is the stuff that dreams are made of.6

And that’s a wrap!

BTW, Did you catch any of the movie references in this post? Here’s a key for all the quotes sprinkled throughout the article: 1. Casablanca 2. Scarface 3. Casablanca 4. Jerry Maguire 5. Sunset Boulevard 6. The Maltese Falcon 7. White Heat

How will you throw an Oscars viewing party? Share photos with us on Instagram using the hashtag #britstagram!

Irene Lee
Irene loves all things DIY, especially if the project involves confetti. She strives to make beautiful things that anyone can enjoy. If she's not immersed in crafting she's probably giggling over an insta-famous corgi or frolicking around Disneyland.
Oscars
DIY Recipes
Oscars Party Ideas
The Conversation
More From DIY Recipes

How to Make Wreath Donuts for Your Holiday Season