Why Being on Your Composting Game Can Actually Hurt the Environment 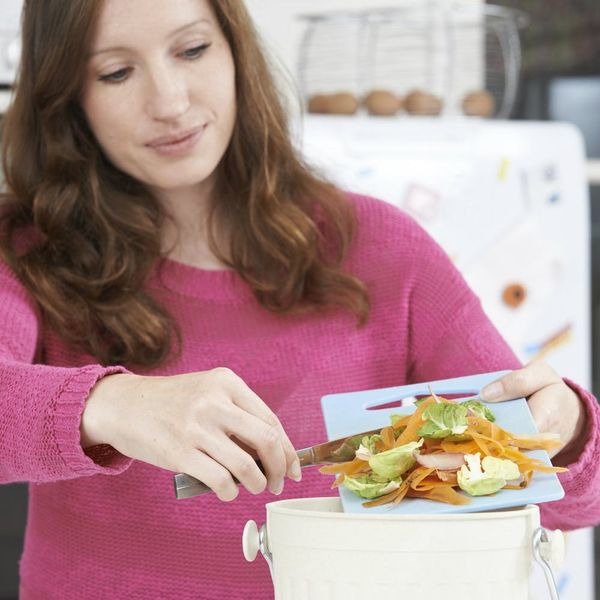 When it comes to being environmentally friendly on the regular, we know you do your part where you can. You buy from eco-conscious fashion brands, use natural beauty products and even try to upcycle food scraps with creative recipes. But a new study shows that many of us could still easily do environmental harm when it comes to food in a completely unintentional way.

The Ohio State University study took place over two months in 2016 and monitored 266 diners’ behaviors surrounding food waste. Before eating, the diners were given info cards explaining either the environmental dangers of wasting food or unrelated financial literary info. Half of the diners from each group were then told their leftover food would be composted, while the other half thought their food was going to a landfill.

Diners could take as many sandwiches, chips and apple slices as they wanted, but couldn’t share their food or take leftovers to go. After they ate, the researchers weighed their trays to see how much food each diner left behind.

Unsurprisingly, those diners who were educated on the negative impact of food waste and who thought their leftovers were going to a landfill wasted 77 percent less food than those who received the unrelated financial literary cards. But the educated diners who were told their leftovers would be composted seemed to not worry at all about adding too much food to their plates and WASTED JUST AS MUCH food as those diners who hadn’t been educated on the dangers of landfills. Whoa.

It’s an eco-conscious catch-22, and one that remains tricky for policymakers to navigate. Danyi Qi, the study’s lead researcher, explains that the two most powerful tactics to manage food waste are prevention (education) and diversion (composting) but says, “When you do both, they cancel each other out.”

Brian Roe, the study’s co-author and member of Ohio State University’s Food Waste Collaborative, explains that composting is still more expensive and environmentally harmful than not wasting at all, even if it’s better than throwing the food away. Thankfully, he says, “There are many new and innovative approaches being proposed to reduce food waste and to minimize its environmental impact,” but that they’ll have to find ways to prevent this canceling out caused by composting if they want their programs to succeed.

Bottom line? If you’re looking to be an eco-conscious eater, the first and most crucial step is to eliminate waste as much as possible, even if you’re crushing the composting game. Roe leaves us with this: “Composting or donating unused food is great, but buying and preparing only what you’ll eat is better.” Heard.

Do you have any food-saving tips to share? Tweet us @BritandCo and tell us how you reduce food waste!