7 Ways to Live Fearlessly According to Frida Kahlo 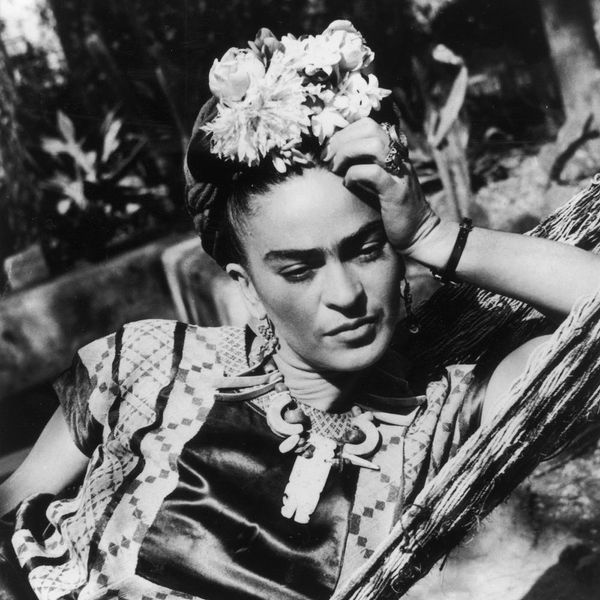 You gotta have mad respect for a fiery feminist from Mexico who didn’t seem to care much for America and spent little time here, yet still managed to become one of our biggest cultural icons. Frida Kahlo only had one major US show in her lifetime, but her popularity in the States has never waned; if anything, her appeal only seems to grow. Remember the Frida stamps in 2001? So cool! Or the more recent International Woman’s Day Snapchat filter? So not cool… but we get what they were going for, and why so many girls are eager to don a braid and traditional pico skirts come Halloween: Kahlo is a symbol of individualism, feminism, rebellion, and out-of-the-box beauty — a perfect heroine for uncertain times.

Perhaps the biggest defining factors of the life of this painter and activist, who, granted, is pretty much undefinable, are her principles. She didn’t write them down, but rather represented them proudly in everything she did. Kahlo believed in what she believed and loved whom she loved, wholeheartedly. Even then, in early 1900s patriarchal Mexico, she understood that a woman who knows who she is and what she wants is unstoppable. Need more inspiration? Read on.

1.When life gives you its worst, do your best. When she was 18, Kahlo was bedridden after an accident left her with a broken spine, collarbone, pelvis, and ribs, and a handrail piercing through her abdomen. Of course, she lamented (who wouldn’t?!), but she also created. With an easel propped on her mattress and a mirror glued to the ceiling, she developed her iconic self-portrait style and produced works that would later launch her career. When asked how she did it, she said, “At the end of the day we can endure much more than we think we can.” No excuses, ladies. (Photo via Hulton Archive/Getty)

2.Love hard and without fear. Kahlo’s love life was rocky, to say the least. Her first love is said to have dumped her after the accident. She dared to marry and remarry the legendary artist Diego Rivera (as famous for his murals as his wandering eye), and their entire 27-year relationship was marred by miscarriages, screaming fights, jealousy, and infidelity from both sides. Still, the two remained committed to each other, if not in body, then in mind and friendship. And she never lost heart. For every heart-wrenching poem, she left inspired prose in the intimate letters written to confidantes and sweethearts, e.g., “Can one invent verbs? I want to tell you one: I sky you so my wings extend so large to love you without measure.”

3. Write (or paint, or play) what you know. The power of any great painter’s work lies in its honesty and intensity. With Kahlo, each stroke seems to come straight from her soul. And that’s pretty much how it was. The anatomical elements allude to adolescent dreams of being a doctor. The fiery colors and introspective nature express love of country, self, and womanhood, as well as the pain that plagued her from childhood. She starred in most of her works because, “…I am so often alone, and because I am the subject I know best.”

4.Be a boss. There’s no question that what Kahlo wanted, Kahlo got. She was barely a teenager when she first encountered Diego Rivera, then already a legend. She asked to watch him work and remained cool and steely as his then-wife tried to run her off. Years later, when she was 20 and he 41, Kahlo boldly asked the maestro to critique her talents and offer tutelage. He later said, “I did not know it then, but Kahlo had already become the most important fact in my life. And she would continue to be, up to the moment she died, twenty-seven years later.” Bottom line: If you want something, go get it.

5. Develop a trademark and own It. While most people try to hide their so-called “imperfections,” the Mexican darling owned the heck out of hers. The unibrow was a badge of honor, of which she said, “I don’t care what you think is beautiful.” She drove it home by filling her brows to make them look darker and accentuating them in paintings. Her other favorite parts of her body? Her eyes and her brain. Touché. (Photo via Roberto Serra – Iguana Press/Getty)

6. Youdo you. Even from a young age, Kahlo wasn’t happy unless she felt free and independent. As a child, she played with “boy’s” toys and defied authority. Later, as a young bride, she refused to take money from her successful husband and often demanded they live in separate houses. She shaved three years off her age, not for vanity, but to coincide with the start of the Mexican Revolution. She shows us that by playing up our strengths and passions, and sticking to our convictions, we can create the life we want, free of compromise.

7.Be proud. Of everything — what you have, the cards you’re dealt, what you do, where you’re from. The Mexican Revolution was a running theme through Kahlo’s art, because of how strongly she believed in her country. She donned traditional Tehuana skirts and dresses (before it was cool) and shared her weaknesses on canvas without fear or reproach. Her father was her hero. On his portrait she inscribed the words, “I painted my father Wilhelm Kahlo, of Hungarian-German origin, artist-photographer by profession, in character generous, intelligent and fine, valiant because he suffered for sixty years with epilepsy, but never gave up working and fought against Hitler, with adoration, His daughter Frida Kahlo.”

What inspires you most about Frida Kahlo? Tweet us @BritandCo!

Stephanie Granada
Stephanie Granada is a freelance writer and editor, who splits her time between Colorado, Miami, and NYC. When she's not locked down in research-mode, reporting a travel story on the road, or identifying areas to bolster the Hispanic community, you'll find her playing outside, working out, or hiding out with a book. Happiness to her is hiking up a mountain, swimming in a beach of her native Colombia, powering through a hellish boxing class, or getting lost in a story with a glass of something delicious — preferably whiskey — in-hand.
Art
Creativity
Art Artist Halloween
More From Creativity