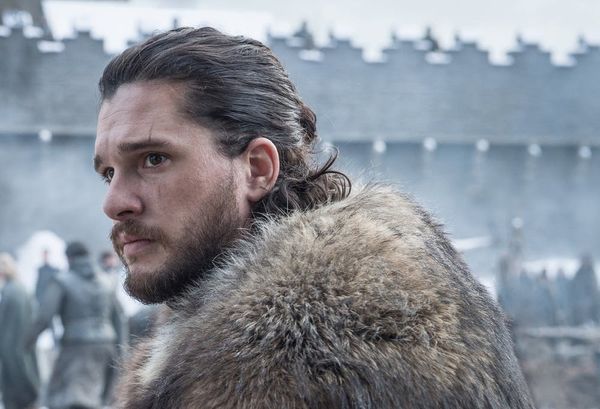 Almost two years after the end of season 7, Game of Thrones returned with the premiere of its eighth and final season on Sunday, April 14, and wasted no time getting to some major drama. Warning: There are spoilers ahead!

We don’t need to remind you that on the GoT season 7 finale back in August 2017, Jon Snow (Kit Harington) and Daenerys Targaryen (Emilia Clarke) left fans reeling when they sealed the deal on their long-simmering romantic tension. Viewers already knew, via Bran Stark (Isaac Hempstead Wright), that the two were in fact aunt and nephew, and the family ties left many conflicted about Jon and Dany’s romance.

In the season 8 premiere, Jon was finally let in on his family secret — that his real parents are Lyanna Stark and Rhaegar Targaryen — which means, besides the obvious wrench in his new relationship, that he is the rightful heir to the Iron Throne, not Dany.

Although viewers were made aware of the secret last season, they couldn’t help but sympathize with Jon as they watched him learn the truth about his family.

Jon Snow trying to figure out how he's related to Dany #GameofThrones pic.twitter.com/2OJaf3ZXY4

Others used the meme of Charlie from It’s Always Sunny In Philadelphia at his “conspiracy” wall.

Jon Snow doing the math after the news from Sam. #GameofThrones pic.twitter.com/TzbO6Fh4eT

Another significant moment in the premiere was Jon’s first dragon ride, a tradition associated with the Targaryen family. “Hey Jon,” EW editor James Hibberd tweeted along with a seemingly smirking picture of the dragon Rhaegal, who Daenerys named after her brother and Jon’s real father, Rhaegar Targaryen. “You know she’s your aunt, right?”

Other people, meanwhile, celebrated the friendship between Jon and Sam Tarly (John Bradley), who was the one to reveal the family secret to the unknowing Jon.

“I’M SHOOK. SAM TELLING THE TRUTH TO JON,” one user wrote. BuzzFeed accurately used a GIF of TV BFFs Drake & Josh hugging it out. Another user posted a GIF of a flustered-looking Maury Povich delivering some DNA news to an anxious guest to demonstrate the tension.

It’s only the beginning of the reaction GIFs. Game of Thrones‘ eighth and final season will continue for five more episodes on Sunday nights on HBO.