23 #HalloweenFails Because We’ve All Been There 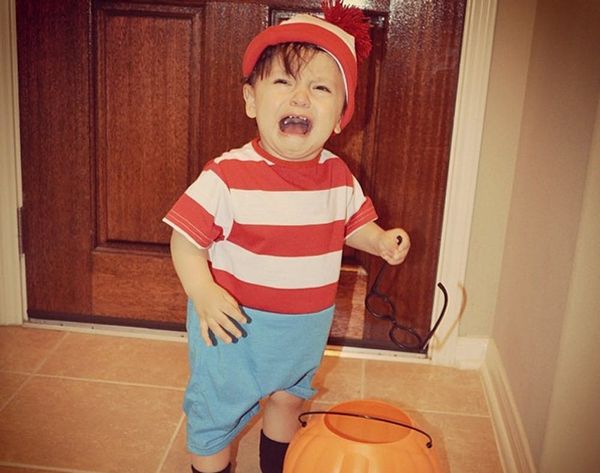 Halloween is definitely one of our favorite holidays, but it’s not an easy one. Kids don’t always like their costumes, neither do pets and try as we might to DIY our way to the BEST COSTUME EVER, things don’t always turn out how we plan… But, there’s no reason to sulk. Let’s celebrate those #HalloweenFails with a resounding #metoogurl and get ready to tackle Thanksgiving.

1. Sad Lobster: “Not in the mood for lobster…” Hey, you just never know what babies are going to like. On Halloween, this little one was definitely not going for the lobster look. Aw, but we’d still give him candy! (via @padseeew)

2. Medusa: When all else (Halloween) fails, just do a costume swap. This Instagrammer was going for Medusa, but ended up going up as Lydia from Beetlejuice after her ‘do didn’t turn out how she was expecting. That’s the DIY spirit! (via @jeemeehan)

3. Really Scary Vampire: The caption on this one reads, “After he saw himself he cried for an hour.” Lol. Aw. (via @ariellasmella87)

4. Rained Out: “Really California?? Really?? The one night of the year we get rain.” Hopefully your costume called for boots, and maybe even an umbrella… (via @_laurahernandez)

5. Fabio?: We feel this ‘grammer’s pain: “This outfit looked so much better on paper #trybeforeyoubuy,” he posted. May we suggest a DIY next year? ;) (via @tomvizzle)

6. Dog-Eating Shark: “100% miserable. The shark lost…. Boca ate through the Velcro under his chin and battled him on 9th ave.” Not *everyone* is a fan of Shark Week, we guess. (via @tiffany_jean)

7. Television Costume: “His expression speaks for itself. He is the one that said he wanted to be a TV…” WE would totally wear this next year, @dskrock! (via @dskrock)

8. Sad Pumpkin: It’s like pumpkins know when Halloween is over. May your jack-lanterns not get mushy until November. Or next year, go no-carve for a longer lasting Jack. (via @aparsons22

9. Elsa: This lovely little snow queen is crying because her dress hurts her. Thankfully Mom had a Plan B! #MOTY! (via @zazasmith)

10. Black Frosting: “Note to self: never eat a cupcake with black frosting… #halloweenfail” Noted. (via @ler614)

11. Black-Eyed Peas: We think this one is pretty clever, but apparently no one else knew who these two were?! We’re trying this one and singing a little more Fergie next year. (via @marissareynolds9)

12. Cat Ninja: If there’s one thing we’ve learned from the art of animal costumes, it’s that cats do not dig ’em. (via @weezthecat)

13. Halloween Mani: The thing with gory manis is that after Halloween night they can just look like you’re in a lot of pain. (via @vaneybeauty)

14. Costume  Loading: Uh, this is why we go through a loooot of pencils around here. (via @pbeaves)

15. Niche Costume: “I’m the Richard Avedon book cover guys! Get it? No? Yeah, you’re not alone. #halloweenfail.” But still! Props to this (totally spot-on) real-life recreation. (via @pieraluisa)

16. Wailing Waldo: Halloween can be a tear-inducing holiday for little ones. Us too, sometimes. (via @caitlincortez)

17. Healthy Treats: If you’re going to give out healthy treats to the kids for Halloween, it’s best if they look as close to candy as possible. This girl was not impressed… and if you look at the stash of fun-size wrappers in our trash, you would see that we totally relate. (via @katiemmax)

18. Old Candy: Nothing ruins a perfectly good sleeve of Smarties like brown splotches. Okay, we take it back — we’ll totally eat that granola bar!! (via @themamapirate)

20. ’20s Hair: Achieving those vintage finger waves are not easy… but we have some tips. (via @cluhrrr)

21. Vampire Teeth: Who knew that it took this many people to put in some vampire teeth? Do you think dentures for actual vampire pose the same problem? (via @danimoz)

22. Hair Candy: We can all get a little too excited when we start unwrapping our Halloween candy. Losing some locks is just a minor hangup in the process. (via @ashleydonde)

23. DIY Tangle: “Well this idea sort of worked. #illjustsayathirdgradermadeit#halloweenfail #ilookdamngood” All we have to say is: #yeahyoudogirl!” No matter how big or small your Halloween fail, just put a smile on and you’re bound to get extra candy. (via @rtobias)

Did you have a funny #HalloweenFail? We’d love to hear about it in the comments or Tweet us at @britandco!

Katelan Cunningham
Katelan is a tech junkie obsessing over all things startup and design. She has entirely way too many apps on her phone and is no stranger to binge-watching. She accidentally fell in love in Los Angeles and that’s where she currently lives, writes, tweets and grams.
Halloween
Party
Halloween
More From Party