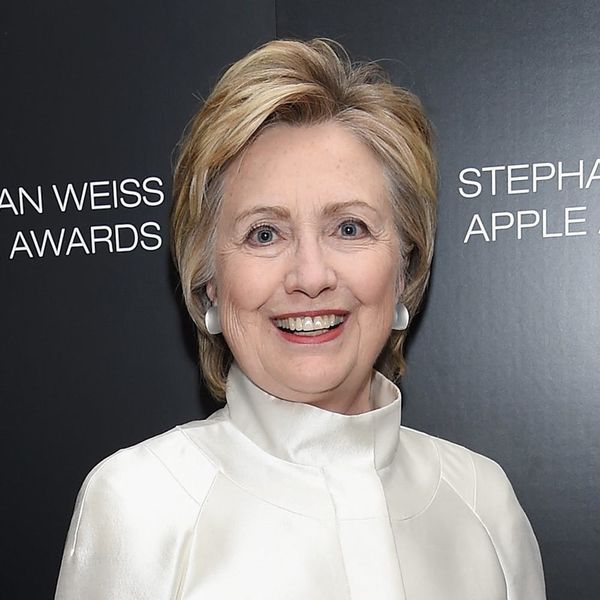 We can generally count on Hillary Clinton to sport one of her signature pantsuits at official engagements. But it’s always a pleasant surprise when she breaks from her uniform, which is exactly what Clinton did this past weekend when she wore a gorgeous, flowy blue caftan to a New York City wedding.

For the nuptials of Sophie Lasry, daughter of billionaire hedge fund manager and Clinton campaign donor Marc Lasry, to Alexander Swieca, the son of another billionaire hedge fund manager Henry Swieca, Clinton wore a Tiffany’s blue caftan and low silver heels. Needless to say, the ensemble was amazing. Plus, the airy silhouette as another upside: It’s easy to get down on the dance floor in it.

Meanwhile, her husband, Bill Clinton, kept things traditional in a navy suit. The political couple was in good company at the lavish wedding, which was held at Cipriani Wall Street in New York City.

What do you think of Hillary Clinton’s summer wedding look? Tweet us @BritandCo!

Elyse Roth
Elyse Roth is a freelance writer and editor who is a midwestern transplant in NYC. She loves to explore the city, plus you can find her at a Broadway show or the ballet usually once a week. When she's not finding things to do in New York, she's thinking about where she can travel next. She's combined her love for food and TV into a blog where she makes food eaten on her favorite TV shows at tvdinnerblog.com.
Celebrity Style
Celeb Style
Celebrity Style Politics
More From Celeb Style