The Dreamiest Hotel Gardens for Your Next Romantic Getaway 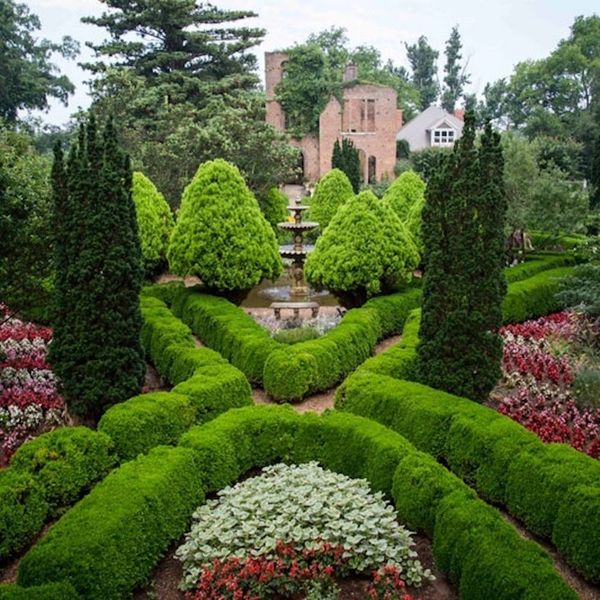 When it’s summer and hot as Hades outside, you might as well embrace it. Picture this: you in a twirly sundress with your beau or BFF by your side. You stop, smell the roses, seek shade under a tree, have a picnic on a grassy knoll, pose in front of a glassy lake. No, you haven’t walked onto the set of a Nicholas Sparks movie; you’ve chosen to hunker down at a hotel with a keen eye for landscape architecture and a solid commitment to keeping up those lush grounds. We found five spots from coast to coast whose lawns give The Secret Garden a run for its money. Keep scrolling to follow us to paradise.

1. Barnsley Resort, Adairsville, GA: One of the few surviving Antebellum gardens of the South, Barnsley was originally built by a wealthy cotton broker as a gift for the love of his life. She died before it was completed, but the businessman felt compelled by her spirit to finish the love nest. He designed the parterre based on sketches by pioneering horticulturalist Andrew Jackson Downing. Most of the mansion and grounds were destroyed during the Civil War, but the bones remained and were used to rebuild and expand the English-style estate, which stretches over 3,300 acres with manicured boxwood hedges, antique roses, and tree-lined paths. Later this year, the resort will debut a small 55-room inn and venue, which we’ll be eyeing for wedding season. (Photo via Barnsley Resort)

2. The Standard Spa, Miami, FL: Walking through The Standard is a study in tropical horticulture. The posh locale opened in 2006 with the intent of recouping the soul of the 1950s building it occupies and pay tribute to the local flora and fauna. Here, landscapers used Washingtonia palms, clusia shrubs, magnolia trees, and birds of paradise plants to create “rooms” where you can find moments of solitude even when the hotel is at capacity. The layout, inspired by Eastern meditation gardens, leads guests to water — a pool and bay facing the west and showcasing a more peaceful side of South Beach, where the sunset views are hard to beat. (Photo via The Standard Spa)

3. Los Poblanos Historic Inn & Organic Farm, Albuquerque, NM: This 25-acre hideout stands in stark contrast to the surrounding arid Southwestern landscape with its lavender fields (the bounty is turned into lotions and soaps sold at the on-site Farm Shop and chic retailers like J. Crew and Terrain); the working farm, which provides meat and veggies to the inn’s restaurant, helmed by a James Beard-nominated chef; and the Spanish-style gardens brimming with roses, cottonwood trees, colorful flower beds, and fountains. When you stay here, you can help tend the aromatic fields and take a little piece of the magic home. (Photo via Los Poblanos Historic Inn & Organic Farm)

4. Hotel Wailea, Maui, HI: This Relais & Châteaux resort’s hilltop grounds combine the zen-like quality of Japanese aesthetics with Hawaii’s lush ecosystem for its botanic chill-zone, set among mango and avocado trees, koi ponds, bamboo stands, and secret hideouts. The formerly members-only club, perched 300 feet above the sea and overlooking the ocean, is tailor-made for couples (no kids under 15 are allowed), but it would work equally as well for a friendiversary or solo escape. (Photo via Hotel Wailea)

5. Glenmere Mansion, Chester, NY: If you go weak in the knees at the thought of living in Gilded Age America, retreat to Hudson Valley’s Glenmere Mansion, 50 miles from New York City. Another Relais & Châteaux property, this Tuscan-inspired villa is the kind of place where you would imagine Gatsby and his friends clinking Champagne glasses in the roaring ’20s. The gardens, designed by one of the first female landscape architects, Beatrix Ferrard, retain their Old World elegance throughout 150 acres of rolling hills and manicured lawns dotted with elegant stone urns and fountains. And since there are only 18 rooms, you always feel like you have the whole place to yourself. (Photo via Relais & Châteaux)

Stephanie Granada
Stephanie Granada is a freelance writer and editor, who splits her time between Colorado, Miami, and NYC. When she's not locked down in research-mode, reporting a travel story on the road, or identifying areas to bolster the Hispanic community, you'll find her playing outside, working out, or hiding out with a book. Happiness to her is hiking up a mountain, swimming in a beach of her native Colombia, powering through a hellish boxing class, or getting lost in a story with a glass of something delicious — preferably whiskey — in-hand.
Gardening
Travel
Gardening
More From Travel