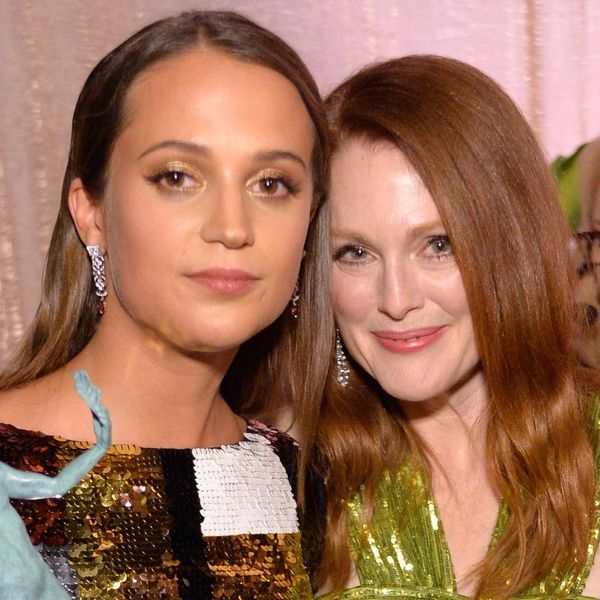 Alicia Vikander certainly seems as strong and as fearless as they come in her new role as Lara Croft in Tomb Raider. But unlike Croft, the actress doesn’t have to fight her battles alone. Sitting down with Vogue for a new interview, Vikander recalled an experience working with veteran star Julianne Moore, who once stood up for her in an incredibly powerful way.

Apparently, something upsetting happened while the two were filming 2014’s Seventh Son, and Moore came to her costar’s defense. Though Vikander didn’t name who else was involved or reveal what exactly was said to prompt Moore’s reaction, she did say that a man in a position of power made a joke at her expense. Perhaps because she was young and still making her name in the business, she said that although she “was really embarrassed,” she “would have just laughed it off.”

Moore wasn’t about to let that happen, though. “Julianne turned to him and said, ‘If you ever do that again, I’m walking out of here and I’m not coming back.’ She was just, like, ‘Don’t you f*cking say that again.'”

Vikander was moved. “It showed me that she had the power,” she told Vogue. “And that meant so much to me.”

Now, years later and amid the current #MeToo movement, the Light Between Oceans actress is using her own power to support the #TimesUp campaign. “It was such a community that came together,” she told Vogue of celebs wearing black at this year’s Golden Globes to raise awareness and protest sexual harassment. “I got on the phone with Natalie [Portman], whom I’d never met, and Reese [Witherspoon]. Suddenly I felt like I made a lot of new friends.”

She added, “One thing that really got to me in their initial email was the fact that — because women are not as well represented in all industries — we often have to fight for jobs. The competition is so tough that instead of getting to know each other and working together, we learned at an early age to compete for that single spot. So then to get on the carpet … and feel like I had actually made friends with the other actresses and people I admire, it was really cool.”

Let’s hope we can keep that powerful, supportive vibe going for all women in Hollywood and beyond.

What do you think about the fact that Julianne Moore stuck up for Alicia Vikander when a man in power man fun of her on set? Let us know @BritandCo!