How the Olympic Leotard Went from Basic to Blinged Out 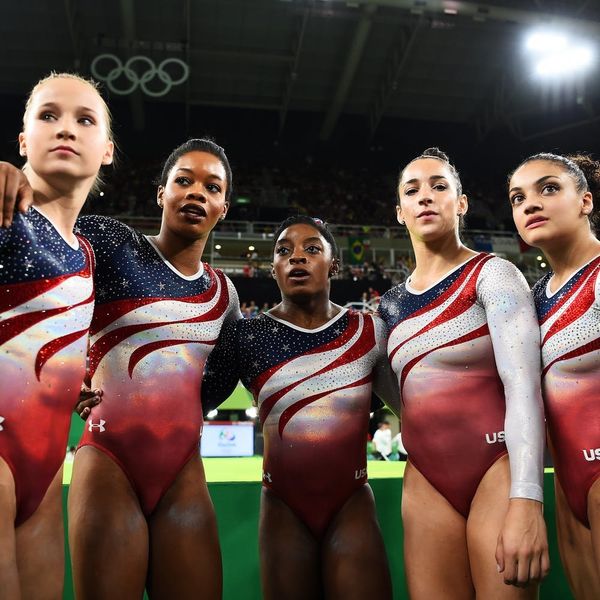 If you’ve been tuning in to the 2016 Summer Olympics in Rio, then you might’ve noticed how darn sparkly the women’s gymnastic team’s leotards have become. Embellished in sequins, shimmer and no shortage of Swarovski crystals (5,000 to be exact), Team USA’s uniforms straight-up slayed. Just as the competition has increasingly gotten more fierce each year, so has the presentation of these expensive custom-made bodysuits. Scroll down to see how Olympic leotards have evolved over time. Hint, hint: They haven’t always been decked out in this much bling.

The history of the leotard, a close-fitting bodysuit worn by dancers and gymnasts alike, wouldn’t be complete without this fella. Meet Jules Léotard, the French trapeze artist who popularized the leotard in the ‘50s as a form of gym wear for stunting. (Photo via Hulton Archive/Getty)

The leotards worn by American gymnast Marian Barone and Team USA during the 1948 Summer Olympics would be considered pretty drab according to today’s standards. Not only are they completely devoid of any sparkle (say what?!), but the silhouette is noticeably looser in the torso. It’s safe to say Olympic uniforms have come a long way. (Photo via Keystone/Hulton Archive/Getty)

We’re seeing progress, people! It’s not until the 1960 Summer Olympics that unitards get reinvented, with long sleeves and higher cuts. With more complex routines, streamlined unitards allowed gymnasts to hit those daring half twists and backward flips. Russian gymnast Larisa Latynina is shown here wearing a dark-colored unitard — the introduction of non-white uniforms allowed gymnasts and teams to express their individuality. (Photo via Central Press/Hulton Archive/Getty)

Despite being the first gymnast to score a perfect 10, Nadia Comaneci’s unitard didn’t live up to all the hype during the 1976 Summer Olympics. With the exception of three stripes (in her country’s colors, no less), her plain white leotard took a back-to-basics approach. (Photo via Don Morley/Getty)

It’s ‘bout time! Flag-inspired uniforms finally entered the arena in the 1980s. If you ask us, Tracee Talavera’s star-spangled leotard gets an almost perfect score. Throw some holographic glitter into the mix, and we’re on board. (Photo via Steve Powell/Getty)

The bold, patriotic designs continued at the 1996 Olympic Games, as Kerri Strug performed a second vault despite her already injured ankle. The function of Team USA’s white uniforms was twofold: to show off their athletic physique and express their pride in the US of A via decorative stars and stripes. (Photo via Mike Powell/Getty)

And then there was McKayla Maroney’s signature “not impressed” face and her spectacular LRL (little red leotard) to match. In place of stars and stripes, the 2012 Olympics marked the appearance of hologram fabrics with major star-studded appeal. You could say the “Fierce Five” looked fabulous performing in their shimmering red leos. (Photo via Ronald Martinez/Getty)

Bring on the bling and leotard swag! Fast forward to Rio, and Team USA has never looked so fly. Between the patriotic design and DDG embellished Swarovski crystals, this year’s leotards were unstoppable. Created by GK Elite, these custom-made suits were two years in the making. Each gymnast receives roughly eight leotards for competition, and 12 for training and practice. The amount of engineering that goes into each suit is astounding, with months dedicated to perfecting the techy materials alone. The result of all their hard work is an undeniably swoon-worthy suit that shines just as bright as the women who wear it. We would expect nothing less for Simone Biles and her Final Five teammates. (Photo via Laurence Griffiths/Getty)