How to Celebrate Chinese New Year in (Almost!) Every State 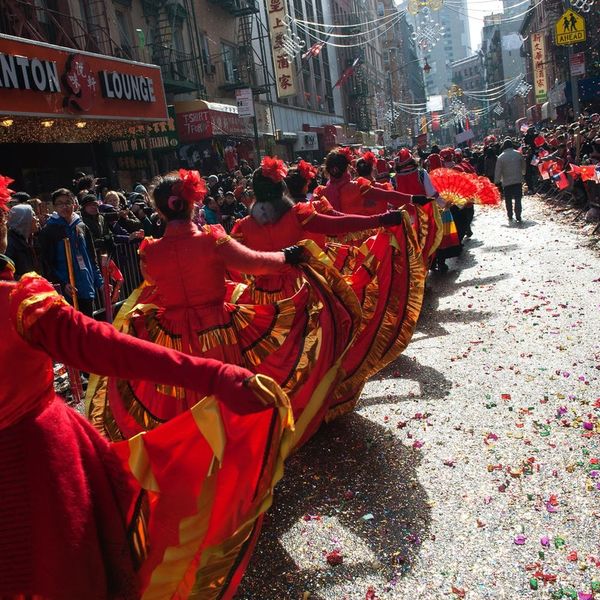 We’ve already popped the champagne at midnight, and maybe, just maybe, we’ve managed to hold onto our New Year’s resolutions, but the celebrations aren’t over yet. That’s because the Chinese Lunar New Year, also known as the Spring Festival, is right around the corner. Pull out your best Chinese New Year decorations and dig up your fave noodle recipes, because this year we’ve found where you can celebrate the Year of the Monkey all over the USA.

Alabama: The 2016 Chinese New Year Festival in Birmingham promises games, traditional dance and enough food to feel like you’re back at the Thanksgiving table. (Photo via Birmingham Chinese Festival Association)

Alaska: Join the Alaska Chinese Association for a joint Chinese New Year and 40th anniversary party. The party takes place in Anchorage on February 8 and is open to members for $20.

Arkansas: Calling all students of the University of Arkansas. On February 6, the Chinese Students + Scholars Association will host a celebration of the New Year, free to enrolled students of the Fayetteville campus.

California: Hope you’re ready to party, LA. Head out to the 117th Annual Golden Dragon Parade + Chinese New Year Festival on February 13 (free to the public too!) or enjoy any one of the other events happening, like the Chinatown tour or Chinatown 5K/10K race.

Colorado: Head out to Highland Ranch in Denver for their Chinese New Year event on February 6, featuring on-stage performances, cuisine and fun for all ages.

Connecticut: Spend your day at Lunarfest, a crazy creative event chock full of activities for kids and adults alike. Kick things off with the lion dance parade and then try your hand at dumpling-making, learning a bit of Mandarin or crafting a lantern.

Delaware: On February 20, the Delaware Art Museum will play host to the Chinese New Year Celebration: Year of the Monkey. Your jam-packed day will include a gallery scavenger hunt, traditional Chinese art activities, calligraphy lessons and more.

Florida: Folks in Orlando can make their way to the Dragon Parade Lunar New Year Festival on February 14 for what could arguably be the most unique V-day date idea. Chinese cuisine, dancing and martial arts are just a few of the activities you can enjoy at this free event. (Photo via Central Florida Dragon Parade)

Idaho: Idahoans can celebrate at the annual Idaho Chinese New Year Party on February 13 at Brandt Fine Arts and Convocation Center. Admission is eight dollars, but kids 12 and under get in free.

Illinois: Home to one of the nation’s largest Chinatowns, Chicago is filled to the brim with activities to celebrate. Check out the Argyle Street Lunar New Year Parade or visit the Garfield Park Conservatory to throw a wish up on their monkey tree. Wherever you go, you’re guaranteed to have a good time. (Photo via Choose Chicago)

Indiana: The Indianapolis Chinese Performance Arts presents the Year of the Monkey, a night filled with Chinese music, dances, acrobats and traditional instruments.

Iowa: Any dinner party that pairs wine with each course is a winner in our book. Head over to the Tassel Ridge Winery to enjoy a four-course meal and wine pairings to celebrate the Chinese Year of the Monkey.

Kansas: Hey K-State students! You can head over to the university on February 7 for their annual New Year celebration. Activities take place from 11am-6pm.

Kentucky: Feeling like tackling a creative DIY? Members of the Behringer-Crawford Museum in Covington get to make Chinese lanterns and paper fish kites at their annual Chinese New Year event.

Maine: Drawing in over 750 attendees, the Chinese + American Friendship Association’s Chinese New Year Celebration is one of the most anticipated events in Maine each year. Speakers include NY Times best-selling author, Tess Gerritsen, and activities include martial arts, Chinese folk song and dance performances. (photo via CAFAM Maine)

Maryland: Stop by the Lakeforest Mall between February 1-14 to explore traditional decor and exhibits as well as live music on the weekends. Shopping and culture? We’ll take it!

Michigan: Stop by the Detroit Institute of Art to check out a classical southern style lion dance and demonstrations of a variety of Kung Fu forms. In addition, visitors can browse the more than 2,600 Asian artifacts that call the Institute home.

Minnesota: Head over to the Chinese Dance Theatre and celebrate the New Year by taking in a production of their latest event: One Earth, One Home.

Mississippi: Make your way to Mississippi State University on February 7 to take part in their annual Chinese New Year Gala, featuring a traditional Chinese cuisine dinner and cultural performances. Admission to this event is three dollars.

Missouri: The Acrobats of China is a fast-paced extravaganza to celebrate the New Year. Wine, hors d’oeuvres and a midnight parade make this a can’t-miss event.

Montana: The Mai Wah Society in Butte, Montana hosts what Reader’s Digest calls “One of the six most interesting processions in America.” An accompanying art show and reception will be held in tandem on February 13. (Photo via Mai Wah Society)

Nebraska:The Asian Community and Cultural Center in Lincoln will host its annual Lunar New Year event on February 13. This popular event is expected to draw crowds of over 700 guests.

New Hampshire: For the second year in a row, the University of New Hampshire plays host to a traditional “Miaohui” or “Temple fair.” Participants can visit different booths and experience everything from rice cake pounding to traditional brush painting.

New Jersey: The Nai-Ni Chen Dance Company is bringing the heat with their Year of the Monkey performance. You can count on witnessing a magical humanization of the Monkey King. Hello, jaw-dropping costume changes!

New Mexico: Time for a road trip to Albuquerque. Celebrate the holiday at the Chinese Culture Center, where the highlight of the day is the Dance of the Dragon, featuring a sixty-foot Chinese dragon that is operated by 10 people.

New York: You can’t really go wrong celebrating a holiday in the Big Apple, and the Chinese New Year is no exception. Head over to Chinatown on February 14 for one of the largest and most extravagant parades in the country. (Photo via Bryan Thomas/Getty)

North Carolina: The Charlotte Museum of History has been celebrating the New Year since November with their latest exhibition: “Enter the Dragon.” A celebration of the importance of the dragon as an iconic cultural symbol, this exhibit runs through the end of May.

Ohio: Clevelanders unite and make your way to Cleveland State University for the Lunar New Year Celebration, featuring a tea ceremony (so fancy), calligraphy, kung fu and so much more. (Photo via Hanban News)

Oklahoma: Keep things authentic in Oklahoma by grabbing dinner at Pho Lien Hoa in Oklahoma City. Loated in the heart of the Asian District, this restaurant specializes in the traditional Vietnamese noodle soup, pho, aka the perfect, low-key way to celebrate the holiday.

Oregon: After being closed for renovations, the Lan Su Chinese Garden is reopening on Feb. 8 in time to celebrate the New Year. Be sure to get there early so you can participate in the traditional “Rolling in the Wealth,” a good fortune and prosperity activity of rolling oranges and coins through Lan Su’s front door.

Pennsylvania: If you’re in PA and looking to party, head over to Philadelphia. With events taking place in Philly’s Chinatown from February 6-14, you’re sure to find something that fits your fancy. From lion dances to museum exhibits, they have it all. (Photo courtesy Philadelphia Chinatown Development Corporation).

South Carolina: Make your way to the capital city and the South Carolina State Museum to celebrate the Chinese New Year with dinner, dancing, live entertainment and a silent auction.

South Dakota: Have kids, or maybe nephews and nieces in grades K-6? We have just the event for you. Help the youngins in your life explore a new culture at the Chinese New Year event at the Adams Museum.

Tennessee: Celebrate with Tennesseans across the state at the East Tennessee Chinese New Year Festival, a two-hour event on February 7 at the University of Tennessee Alumni Memorial Building.

Texas: Time to hit up H-town, Texans. Grab your friends and head over to Houston City Hall for the annual Texas Lunar Festival. The day is jam-packed with musical entertainment from traditional dance to modern jazz.

Utah: The gang’s all here at this celebration. Eighteen Chinese organizations throughout the state of Utah come together to put on the Chinese New Year Celebration, an event that attracts thousands each year.

Vermont: The Asian Cultural Center of Vermont has this event down. The 14th annual Lunar New Year Festival is free and welcome to all. You can count on celebrating the different cultures of Vietnam, Korea and China at this party.

Virginia: They do say Virginia is for lovers. We’re guessing that’s why their annual Chinese New Year Celebration, featuring entertainment and crazy amounts of food, is taking place on Valentine’s Day, February 14.

Washington: On Saturday, February 13, make your way to Hing Hay Park for a Lunar New Year celebration that boasts itself as the largest event in the region. Try your hand at martial arts or check out traditional lion dances.

West Virginia: The Lantern Festival Party on February 13 is hosted by the Chinese Professionals Association of West Virginia. With performances and dinner offered, this is an event you won’t want to miss.

Wisconsin: The entire community is welcome to join the University of Wisconsin-Milwaukee as they celebrate the year of the monkey on February 20. The annual Chinese New Year Gala will feature community performances and dragon dances.

Wyoming: Grab the kids and head to the Paul Smith Children’s Village for an exploration of the Chinese New Year. Kids and parents alike will learn about the Lunar New Year and the meaning behind the Year of the Monkey.

Are you celebrating Chinese New Year? Tweet us your plans @BritandCo!

(Editor’s Note: Brit + Co was unable to find events in Louisiana and North Dakota at the time of publication.)

Kelsey Nelson
Kelsey Nelson is a born-and-raised Ohioan living life in South Carolina. She thrives at binge watching Netflix, contemplating what to order at the bar and running any trail or road she can get her feet on. In addition to being a Brit + Co contributor, she writes about southern pleasantries, DIY mishaps and more at North Living South. If she isn’t writing or running, she’s off adventuring with her husband Brad and their Lab/Dachshund mix, Gordy.
Creativity
More From Creativity