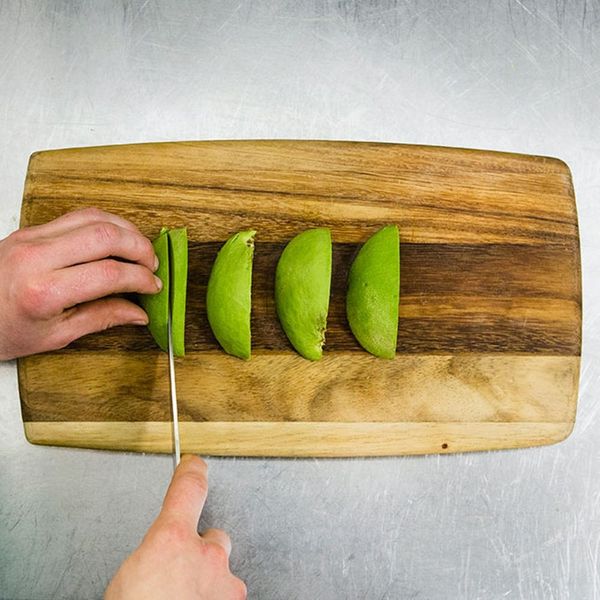 More than any other seasonal dishes, summer fare seems to be so easy to prepare. Toss it on the grill for immediate char, add a light marinade for a zippy kick that won’t weigh your bites down or do nothing, because what’s more refreshing to nibble than fresh fruits and veggies on a hot day? Whether you go that lazy girl-approved route or opt for something more intricate, what always stands between you and an impressive plate of crudités is getting the perfect chop on your produce. Don’t be intimidated by thick husks (really, skip the pre-cut pineapple) or pesky pits (we’re looking at you, mangos), because once you learn the *right* way to cut your favorite summer produce, you won’t believe you and your butcher block weren’t besties sooner.

While half the battle is using a properly sharpened knife, technique is what sets the pros apart from the rest. That’s why we tapped two of our favorite lady chefs — Natalia Bushyager and Leigh Loper of San Francisco’s culinary cafe Picnic on Third — to school us on how to peel, slice and chop eight fruits and vegetables you’re bound to eat this season, and all in easy-to-follow GIF form! Scroll below for the birds-eye-view action of the cutting board + new ideas for how to serve up these summer staples.

How to Cut a Persian Cucumber

Technique: Roll cut. “You roll the cucumber as you cut it on the bias, and it forms geometric, almost 3D-looking segments,” Natalia said.

Serve it up: In a raw cucumber salad with avocado chunks, lime and garlic.

How to Cut Corn

Technique: Plank slices. “We’re roasting the corn for 30 minutes at 350 degrees F to make the husk easy to peel along with all the silks,” Leigh said. “It also helps keep the kernels intact when you slice them off of the cob.”

Serve it up: As garnish for seared fish, or make an easy salsa with jalapeños, onions, lime juice and cilantro.

How to Cut a Mango

Technique: Hedgehog cut. “You cut the mango pulp in a cross-hatch pattern but leave it in the skin so when you pop out the fruit it looks like a hedgehog! It’s pretty cute,” Leigh said.

Serve it up: Sprinkled with chile lime salt to spice up your summer fruit plate.

How to Cut Cherry Tomatoes

Technique: Halving hack. “We’re using the lid as a trick to slice a handful of cherry tomatoes in half at once,” Leigh said. “It’s a great way to save time.”

Serve it up: Salt them and add a little red wine vinegar, then toss them in a salad with roasted corn and cilantro.

How to Cut an Avocado

Technique: Quarter + slice. “When you quarter the avocado before you peel it instead of when it’s halved, it makes removing the skin really, really easy,” said Natalia.

Serve it up: Sprinkle with Maldon Salt and serve with raw tuna salad or as a topping to chili or fish stew.

How to Cut a Watermelon Radish

Serve it up: As a stunning garnish on any summer salad.

How to Cut a Pineapple

Serve it up: Sprinkled with a fresh batch of mint sugar.

How to Cut Watermelon

Technique: Steak slices. “Cutting the watermelon into 1-inch steaks is a little unexpected since you typically don’t eat watermelon slices whole like this,” Natalia said.

Serve it up: Grilled on a searing hot, oiled grill and served with a little lemon juice and salt.

What tricks do you have for cutting, chopping and peeling fruits + vegetables? Share your meal prep hacks with us in the comments below.