7 Ways to Stop Your Kids from Lying 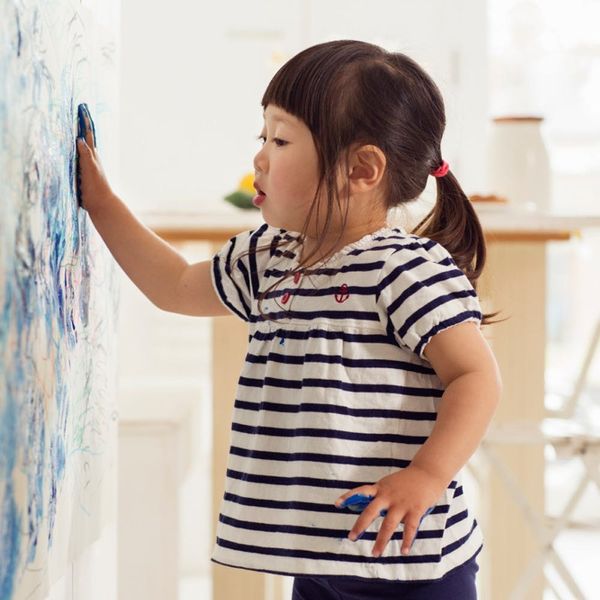 There’s finger paint on the wall and marker scribbles on the floor. When you give your little artist that “I know what’s going on here” look, they point at the family dog and snap back with, “He did it.” Obviously your French Bulldog didn’t grow opposable thumbs overnight, but your kiddo is sticking to their story. This less-than-truthful behavior is completely common. Lying serves a purpose — for anyone. But unlike the more sophisticated lies of an adult, a toddler or young preschooler’s lies aren’t exactly spun as a web of deceit. If your tot’s “untruths” are starting to pop up more regularly, take a look at what you need to know about young children and lying.

1. Naughty but Normal: You don’t want your child to lie, of course. But a lie here and there doesn’t exactly qualify your little one as pathological. Not ‘fessing up to breaking a toy (or worse, your phone) isn’t always a reason for major concern. As licensed mental health counselor and registered physical therapist Dr. Brenna Hicks, PhD, reassures us, “Little lies are a child’s way of avoiding responsibility for an action, and they are a normal part of development.”

2. Crime and Punishment: Kids typically know when they’ve done something wrong. No, mommy’s lipstick does not go on the white couch. And no, the applesauce doesn’t belong all over the kitchen floor. Your tot is entirely aware when it comes to these types of issues. But that won’t stop them from lying. “Children often lie because they are either afraid of the consequences of or reaction to their behavior — they are trying to avoid punishment,” explains Dr. Hicks.

3. Testing the Truth: Early childhood is a time of exploration and experimentation. Your tot’s favorite game is dropping their sippy cup just to see what happens. When your young child starts using their words along with their actions, lying can also become a way to experiment. Dr. Hicks notes that sometimes young children lie to see “what it feels like to try to get away with something they know they shouldn’t do.”

4. Explaining Yourself: Discipline isn’t the name of the game when it comes to early lying. Your child needs to understand what lying is and why they shouldn’t do it. “Parents should calmly explain to a child that they would like to hear the truth and that the child will not get in trouble either way,” recommends Dr. Hicks. “This proves to the child that lying doesn’t benefit them any.”

5. Acknowledging Answers: Dealing with a lie isn’t a one-and-done situation. Yes, it’s important to handle the actual lie. But it’s also important to help your tot learn a lesson from what just happened. “A toddler needs to learn about telling the truth just like they must learn about compassion and empathy,” Dr. Hicks says. “Once the truth is expressed, it is important to acknowledge the choice that was made — ‘I know that was hard to tell me the truth, but you were brave and honest. Thank you.’”

6. Cool and Calm: It’s tempting to kind of freak out when your kiddo lies to you. Before you lose it over lying, take a moment to calm down. ”A parent should avoid threatening or giving ultimatums,” suggests Dr. Hicks. These aren’t particularly effective techniques and won’t help you or your child.

7. Asking Around: If you’re starting to worry that something isn’t right with your seemingly extraordinarily devious child, ask other parent friends. The normalcy of the behavior may surprise you. Chances are that your friends all have stories that are similar to what you’re experiencing.

What’s your child’s funniest lie? Tweet us the story @BritandCo!

Erica Loop
Erica Loop is a freelance writer living in Pittsburgh. When she's not busy creating kids' activities for her blog Mini Monets and Mommies, you can find her trying to hang out with her teenage son, being chased by her two Olde Boston Bulldogs or teaching a children's karate class (she's a third degree black belt!).
Family
Parenting
Family