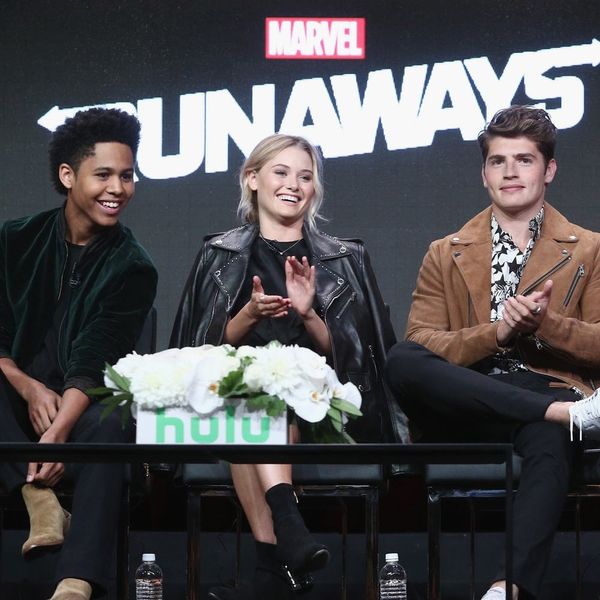 Between Supergirl, The Defenders, The Flash, and Jessica Jones (which will be FINALLY be coming back to Netflix in 2018 — eee!), it’s been *all* about the superheroes as of late. You’re gonna want to make room for one more — er, make that six more — however, as subscription streaming service Hulu is getting in on the trend with an original Marvel series that’s all about teenagers with special powers going up against their super villain parents. Titled Runaways, the show, which is set to debut on November 21, unveiled its very first trailer during New York City’s Comic-Con fest yesterday and, we must say, it looks awesome.

The action-packed clip below offers up a glimpse at the unique plot, which is based on Brian K. Vaughan and Adrian Alphona’s 2003 comic book series of the same name. Essentially, Runaways is a coming-of-age story (with, you know, inherited superpowers) that follows an unlikely group of teens as they come together to take down a common enemy known as The Pride, a secret order of super villains… AKA mom and dad.

Every teenager thinks their parents are evil, but what if they actually are? Check out this early look at @MarvelsRunaways exclusively on @Hulu. #MarvelsRunaways

We’ve got every reason to hope the 10-episode season will be just as good, considering that it’s executive produced by Josh Schwartz, who brought us the cult-classic Gossip Girl, and Stephanie Savage of The OC. Can you say dream team?

The cast of @MarvelsRunaways visit their lockers at the Hulu booth (#1526)! #MarvelNYCC

We can’t wait to watch them all in action, but in the meantime, check out the clip here.

Which superhero show is your fave? Tweet us @BritandCo.