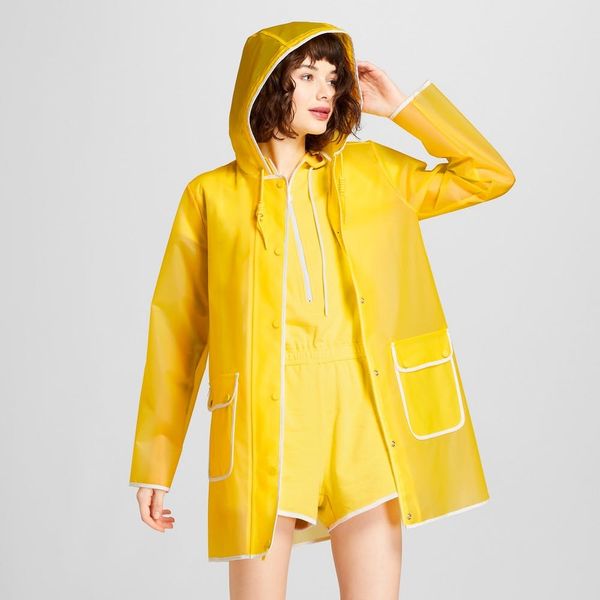 If, like us, you’ve been not-so-patiently waiting for the Target x Hunter launch to tackle every single spring shower in style, you may have had one very frustrating weekend. The epic collaboration between the cult favorite boots brand and the retail giant finally launched, but many fans were left with empty shopping carts after seeing many items sold out, delayed, or otherwise unavailable.

Shoppers were understandably excited to get their hands on Target’s first collection with the iconic wellies brand, seeing as the rain boots beloved by style icons from Kate Moss to Princess Diana normally retail for $150. The 300-piece Hunter for Target collection features rain-friendly styles for women, men, and children, as well as accessories and outdoor gear, at equally wallet-friendly prices ranging from just $5 to $80… significant savings for those looking to rock the label without breaking the bank.

The entire line dropped in the wee hours of the morning in stores and online on Saturday, April 14, but many fans ended up disappointed and empty-handed, because a number of hot-ticket items were immediately delayed, sold out, or mysteriously unavailable, and fans took to social media to air their grievances with the retailer.

@Target hey, howdy, hey! we're going to be selling Hunter boots and rain coats! It's going to be so much more affordable than if you get them from Hunter!
also @Target: but we're not going to sell them in any store near you or ship them online. None for Gretchen Weiners, bye. pic.twitter.com/0LQRFCeKnl

Went to Target yesterday to try and cop some Hunter stuff. But, no surprise, everything was gone already.

Target, I love ya but you really pissed me off this morning. All Tanner and I wanted was that darn #HunterxTarget wagon. Delayed, sold out, not available in store. Does it actually exist? Not cool dude @Target not cool.

Woke up excited to finally shop the #HunterxTarget collection, unavailable in central IL… order online you say? Nothing is in stock. For someone who makes it a sport hiding how much $$ I really spend at Target from my husband, this feels like a slap in the face pic.twitter.com/nX85MPPvsq

Fans were particularly peeved at the lack of tall women’s boots, which are the Hunter staple so many wanted to save some coins on.

Why are you still advertising hunter tall women’s boots? Shipments are ‘delayed’, & I’ve been unable to obtain fact based information on when the supply should be available. One associate mentioned tallboots are no longer available. Seems like false advertising if that’s true.

Thanks @Target I’ve been waiting weeks for the Hunter launch and now the tall rain boots are delayed. ☔️ #HunterxTarget

For their part, Target added a statement to their website addressing the tall boots specifically. They wrote, “For guests eyeing the women’s tall rain boots, unfortunately they are delayed and won’t be available in stores or online when the collection launches. We apologize for any disappointment and we’ll share more information when we can.”

They’re also addressing complaints on social media, replying that the collection was only meant to be limited-edition, and items will not be restocked.

Our Hunter for Target collection was available for a limited time. We do not anticipate additional items becoming available, unless items are returned. We apologize for any inconvenience and we'll share your request to have this back in stock with our Merchandising Team.

In the meantime, fans can check Target’s website to see what is still available, as well as checking back in-store for any possible returns, while supplies last.

Did you have any issues trying to snag Hunter x Target over the weekend? Let us know @BritandCo!

(Photos via Hunter for Target)

Arielle Tschinkel
Arielle Tschinkel is a pop culture junkie who went to NYU because the Olsen twins went to NYU (really). She is a freelance writer whose work has also been featured on HelloGiggles, Refinery29, SheKnows, Bustle, Hollywood.com, and many others; and she's living her dream one Britney Spears GIF at a time. Follow her on Twitter @mrstschinkel or visit her website at arielletschinkel.com.
Boots
Style News
Boots Controversy Fashion Collaboration Shoes Target