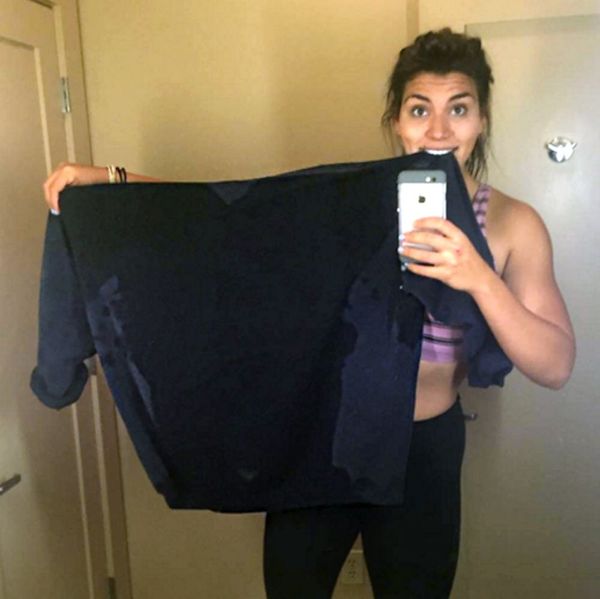 If you’re looking for fitness inspiration that’s raw, real and ready to go, look no further than Instagram. There’s a treasure trove of serious feel-good stories under hashtags such as #healthyliving or #100poundsdown. Check out these 10 ladies making their way through their weight loss journeys (all done naturally!) whose attitude alone will help motivate you.

1.@EstelleArcher: An overweight, not-confident gal now has a fitness empire, including her SWEATbox studio in Richmond, Virginia. She admits that she’s done nothing radical; her results come from eating less sugar, no processed foods, no seafood that’s not wild-caught, drinking tons of water, daily cardio and strength training and eliminating as much stress as possible. She pays it forward by offering YouTube videos, DVDs and free videos to those looking to lose weight the natural way. (Image via @EstelleArcher)

2. @MyWeightlossFr: Helene started her journey in 2012 and is less than 15 pounds away from her goal weight. She’s already lost almost half her original body weight — she started at 319 pounds. She’s got an e-book if you need further reading, but her Instagram account is pretty rich with tips and beautiful images of healthy meals she eats, including a few recipes. (Image via @myweightlossfr)

3. @Prep4Life_Fitness: Down 16% in body fat, Nicole is honest about how she used to compare herself to others losing weight, but she’s since realized that her body type is unique to her. Her voice is real and her tips are simple but effective: keep realistic goals, hard work shows itself off and food is like medicine. She’s only got 1,500 followers, but with this attitude, she’s one to watch as her body transforms. (Image via @prep4life_fitness)

4.@Average2Athlete: The duo behind this account wants you to discover your inner athlete just like they did — through track workouts, gym sessions, home workouts and more — while maintaining a friendly, girly sensibility. Julia is even a fitness instructor herself. Their account often leads back to their blog, where you can find recipes and motivational tips to help you keep the weight off. (Image via @average2athlete)

5.@EricaFitLove: Erica used to hate getting her picture taken and would try to counterbalance her lack of self-love with makeup and clothing and disguising it all. She now says she feels comfortable just being herself — even if that means having hairs out of place or wearing no makeup. Her 131,000 followers must agree, as they keep up with her workouts and fitness regime as well as Erica’s role as a mother. She lost over 160 pounds and has continued to keep the weight off. (Image via @ericafitlove)

6. @TheIronGiantess: This 24-year old has lost over 115 pounds and counting with no pills, surgery or anything else other than just good, old-fashioned working out. She’s super real and down to earth in her posts, showing things like this sweatshirt that used to fit her and now doesn’t — because it’s way too big! She’s also on DietBet, a website that helps you stay accountable for your weight loss. Her team’s final weigh in is February 15: good luck with the final pounds! (Image via @theirongiantess)

7. @sami_rose_: This 5’1’’ Brisbane, Australia lovely lady was about 40 pounds overweight, but got her butt in gear and is now a personal trainer and fitness guru down under. One of her goals was to compete in a fitness competition, which she achieved last year. Not in Australia? No worries, mate — she can help you through her online transformations. Her account is full of totally true quotes (“Sometimes I’m hungry, other times I sleep”) and killer ab photos to keep you going. Bonus: Her workout outfits are totally enviable. (Image via @sami_rose_)

8. @healthyhappylora: Healthy and happy, indeed! Between pictures of her smiling, beautiful face and the delicious and nutritious meals she eats, you’ll get a sense of who Lora really is. There are quick recipes (including one for a white chocolate protein truffle — who knew?) and images of her adorable little one too. Her almost 40k followers get shout outs too, as they embark on their fitness transformations. (Image via @healthyhappylora)

9. @Paigehfit: Almost 60,000 people have followed Paige’s journey from overweight to svelte in about 2 years. Interspersed between helpful videos, motivational quotes and personal pictures are ‘grams where she gets real: She doesn’t want to put on clothing and go to the gym in 30 degree weather, either. But she does it. We’re also fond of her little hints of real life: mismatched socks, clothes on the floor. There’s nothing fancy here but her emotions are totally raw and you’ll be able to relate to her, no doubt. (Image via @paigehfit)

10. @justrobbin: Almost 50,000 people have watched Robin lose 90-plus pounds, and it probably has something to do with how fun her account is. It’s filled with selfies, real food (nothing highly styled here), workouts and more as she goes about her day living the best life she can. What’s most lovable, however, is that she does these posts where she wears an almost identical outfit to what she had on in a picture where she’s heavier; you can really see the dramatic difference, which is totally inspiring. (Image via @jus   trobbin)

Check out even more fitspo over on our Pinterest page @BritandCo!