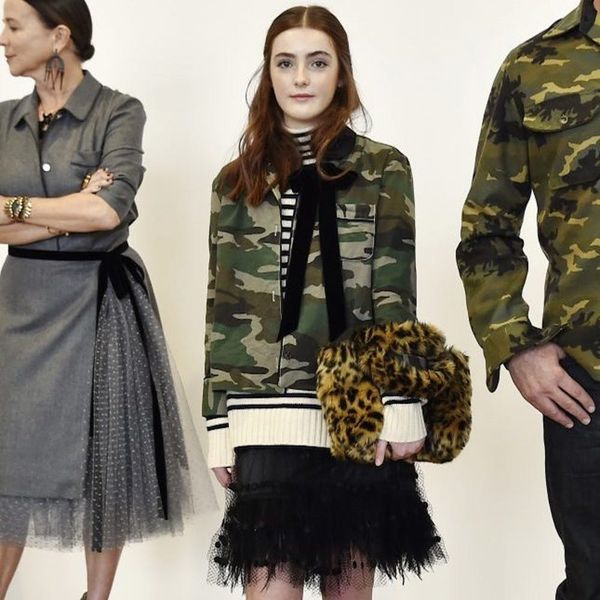 On Sunday, J.Crew president and creative director Jenna Lyons once again bucked the norm with the brand’s Fall/Winter 2017 presentation during New York Fashion Week. Just like their September 2016 show for the spring collection, they tapped a mix of models and “real people,” ranging in age from nine to 67. While the clothes were enough to keep us distracted (all of that tulle!), we spied the offspring of some very famous actresses.

Julianne Moore’s 14-year-old daughter, Liv Freundlich, made her modeling debut wearing a camouflage shirt jacket with a big dot nettle skirt. Let’s just take a moment and take note how much Liv looks like her!

“I’m just here as a mom,” Julianne Moore told Women’s Wear Daily during the show at Spring Studios on Sunday. The proud mama shared this pic of her daughter along with the caption: “@Jcrew beauties @lisaeisnerjewelry and my very own @livfreundlich #realpeople.”

Liv was in good company. It was also the first time that Molly Ringwald’s daughter, 13-year-old Mathilda Gianopoulos, modeled. “Jenna offered it to me and I was really excited,” she told WWD. “I’m interested in modeling and I want to act as well.”

Her famous mother Instagrammed a photo of Mathilda getting ready for her big debut backstage and captioned it “Stage Mom.”

Famous grandoffspring were spotted in the presentation too, like Whoopi Goldberg’s granddaughter Jerzey Dean, who is an aspiring designer herself.

And other famous faces like actress Sandra Bernhard made an appearance as well.

What do you thinking of Liv and Mathilda’s debut? Not too shabby for their first show, right? Tweet us @BritandCo!