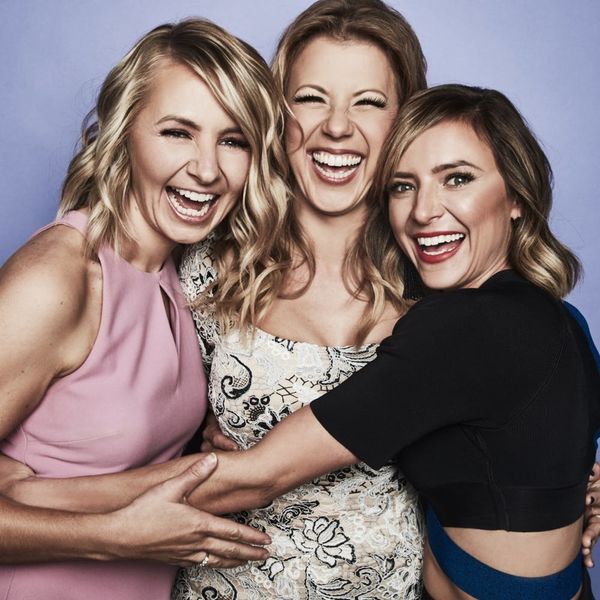 Jodie Sweetin, Beverley Mitchell, and Christine Lakin were three of our favorite stars in the ’90s, and now they’re back on our TVs in Pop’s Hollywood Darlings. The unscripted comedy, which just started its second season, finds the real-life BFFs playing exaggerated versions of themselves as they navigate adulthood, parenting, and fame — with frequent cameos from some of our other favorite ’90s TV stars. It’s like a “TGIF” group text come to life.

The best part about the show, though, is Sweetin, Mitchell, and Lakin’s friendship. Their goofy, unfiltered dynamic is the heart of the series — and it’s just as fun (and funny) offscreen. They gave us the scoop on their decades-long friendship, their dream guest stars, and what to expect from season 2.

Brit + Co: A lot of our readers grew up watching all of you on TV. Did you watch each other’s shows?

Christine Lakin: I totally did. I was such a Full House fan. Before I was even on TGIF, when I found out I got Step by Step and it was going to be on TGIF, I freaked the eff out. I was like, I have made it, I have peaked. And I still kind of feel that way.

Beverley Mitchell: And I actually watched both Step by Step and Full House.

BM: Not too hard. Just kidding, I love you.

B+C: How did you become friends?

BM: We all go way back. Jodie and I actually did commercials together when we both were starting out our careers at the tender age of four. We did an Oscar Mayer commercial together. And then we were always at the same auditions because we were kind of the blond-haired, blue-eyed, sarcastic little sh*ts.

JS: Speak for yourself. [Laughs] Yeah, we just sort of grew up always seeing each other. Every time we’d go to an audition, it was like, “There’s Bev!” And then Christine actually came to screen test [for Full House].

CL: I did an audition on the set of Full House. … That’s where we met for the first time, but then we were in acting class together, I went to Jodie’s 13th birthday party, and I would see her all the time [because] we shot on the same lot.

And then Bev I met when I was like 19 — I was on an episode of 7th Heaven where I played an at-risk pregnant teenager. Very dramatic episode.

The funny thing is, we knew each other growing up, and we all went off, did other things — had babies, went to college, got married, got divorces — but what was great is that coming together to do this show … it’s like having a friend where no time has passed in some ways, but we were all different people as adults. So getting to touch on our friendship and on this shared experience growing up is what makes our dynamic so unique.

JS: And we have so much fun together. We are such good friends. You know, I think the kitsch value of it is, oh, we were all on TV shows in the ’90s. And that’s cute and fun, but that’s not really what the show is about, and that’s not really the basis of our friendship and what makes the show really funny.

BM: I think also there’s something so unique about the understanding that we have about each other. We get it on another level that some people might not connect with or understand. There’s a lot of times where words aren’t needed, and we completely just get it, because we get each other. There’s like a sisterhood between the three of us.

JS: And we make fun of each other a lot.

BM: I’m starting to realize that I think that’s when I know I have a really good friend — they make fun of me a lot. That’s my way of feeling loved.

JS: My character is sort of the free spirit, wild and whatever — it’s obviously turned up a little bit. … And I think I’m not quite as harsh as my character maybe is on the show.

CL: You definitely have the dark sense of humor.

JS: Oh, that’s for sure. Dark and inappropriate — that’s exactly who I am.

CL: I would say, I tend to be a bit of a goofball on the show, and I can be that in real life, but my character has an ego about herself that is cringe-worthy at moments, which I definitely don’t have in real life. … And that’s where I think it gets fun for the three of us, to sort of make fun of ourselves, to poke fun at certain aspects of personality or Hollywood or the business.

BM: And also the perceptions. Some people have perceptions about us and we definitely kind of flip those perceptions on their head and have some fun with it.

CL: When that actually happened.

JS: I’ve had people ask me for autographs in bathrooms.

BM: Oh, yeah. The worst is when they try to push something under the stall. And I’m like, “Kinda busy right now!”

JS: It happened more so when I was young. … There was a different level of, like, they feel like they sort of know you. As an adult, I think people are a little more cautious. Or maybe they’re scared of me now, I don’t know.

You know, Full House was such an iconic show and people watched it for 30 years. They really do feel like, “I know you. You’re actually someone I’ve spent time with.” So there’s a weird level of familiarity when people meet you. Like, they will hug you and you see the look on their face when they realize, like, “I have totally crossed a boundary.” And they’re like, “I’m sorry, I just grew up with you and you’re like my sister. I mean, you’re not, but I feel like you are.”

BM: Everybody’s always convinced that I went to high school with them.

BM: Don’t you love when somebody’s like, “You look like her, but you look so much prettier.”

JS: The best fan encounter was at a gay bar in New York City, and this guy was like, “You look so much like Jodie Sweetin. But she is not cute now. You are so much prettier than her.” He went on this whole thing, and then I was like, “I am her.” And he literally got down on his hands and knees and was like, “I love you, I can’t believe I just insulted you.” We hung out the rest of the night. He was hilarious.

B+C: So, how will season 2 be different from season 1?

BM: Season 2, we turned it up a notch. After figuring out how season 1 went and what we loved about the season and things we wanted to change, this season, the situations in which we get caught are crazy, off-the-wall.

CL: Yeah, I think we’ve gotten a little edgier, a little more adult. The show has a slightly different look, as well. We’ve taken it from being sort of a mockumentary to where it feels even more like a single-camera comedy. We’re still an unscripted show, so everything you see is improvised, and we have some really hilarious and amazing guest stars — not only celebrity guest stars, but everyone else on the show that you may not recognize, they’re all standup comedians, bloggers, writers. They’re all so funny and so good. At times, I was like, “Damn, why did we hire such funny people? They’re going to make me look bad.”

B+C: So, you mentioned guest stars. You’ve obviously had some really fun people on the show already — is there anyone who hasn’t been on the show who you’d like to have on the show?

BM: Oh, the list is long. I would love to have some of my family from 7th Heaven.

CL: We’re trying to get Suzanne Somers. We’ve been trying for two years, but her schedule is crazy.

CL: I want Tori Spelling to come on. I think she’d be hilarious.

BM: She would be so much fun. And Tiffani Amber Thiessen would be really fun, too.

JS: Tiffani and I did pageants together when I was little. Tiffani and I were California State Cinderella something-or-other. I have pictures of us in ridiculous crowns and sashes.

B+C: Any ’90s crushes you’d like to bring on for a little blast from the past?

CL: Oh, the ’90s crushes. I mean, I think we’d love to have Jared Leto. But I have a feeling he might be a little busy. We obviously have Will Friedle. I’ve been friends with Rider Strong for so many years — he’s doing more directing work now, so I talk to him about season 2, and he’s really not as interested in being in front of the camera. Same with Jonathan Taylor Thomas. I was really trying to rope him in, but he’s just not doing a lot of on-camera work. It’s hard, you know — people move on, they do different things with their lives, and it’s not necessarily where their headspace is at, which I totally respect.

BM: But we do have to say that everyone who has come on the show has left saying it was the most fun they’ve ever had. It’s like our summer camp. We don’t tell our husbands and significant others how much fun we have — we have to be like, “Ugh, work was really hard.” Our lives have definitely been extended by the amount of laughter and fun that we have.