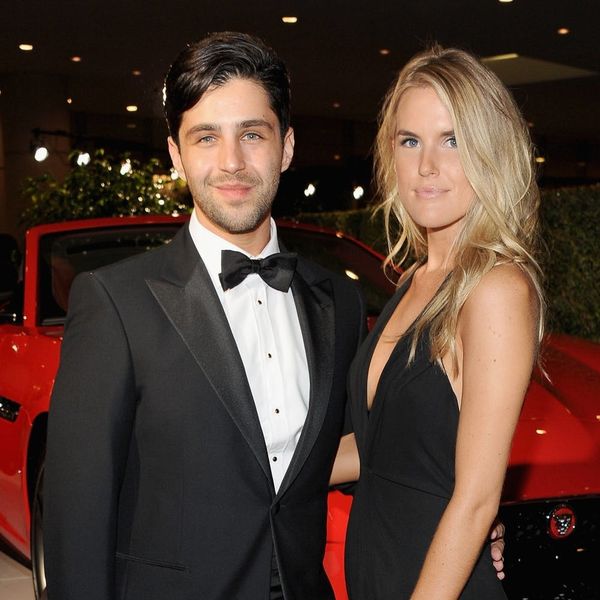 You may still think of Josh Peck as Josh Nichols from his days starring on Nickelodeon’s Drake and Josh, but a lot has changed for the actor since the series ended over a decade ago. Last year, the actor married Paige O’Brien, and on Thursday, August 23, the couple announced that they’re expecting their first child.

“Oh baby. Literally, there’s a baby in there,” the 31-year-old dad-to-be captioned a photo of himself and O’Brien on Instagram. “Love u @paigeobrienn.”

He also took to Twitter to share the exciting news, writing, “Guys I did it! I’m finally down to my goal weight! Oh and we’re pregnant.”

Peck and O’Brien said “I do” in June 2017 in Malibu, surrounded by family and friends including Peck’s Grandfathered costar John Stamos and his wife, Caitlin McHugh, who became parents themselves back in April.

One person who wasn’t at the wedding was Peck’s Drake and Josh costar and onscreen stepbrother, Drake Bell. After not getting an invite to the wedding, Bell sent out a now-deleted tweet, writing, “When you’re not invited to the wedding the message is clear….”

Soon after, Bell told Entertainment Tonight that he regretted the impulsive message. “We’ve been together 18 years, Josh and me, me and Josh,” Bell said. “We’ve been so close, it was just one of those things where, you know, I’d been talking to him, and he’s been telling me about the engagement. And then I saw on social media, the wedding, and I didn’t hear about it. So, it was just one of those things where it was just like, ‘You didn’t even tell me?! I had to find out on social media?’ And then you’re like, ‘You know what!? Fine!’ and then I’m like, wait, I probably shouldn’t have done that.”

Thankfully, the two patched things up and reunited at the 2017 MTV VMAs.

Desiree O
Desirée O is a ‘Professional Bohemian’ who loves anything and everything related to the arts, entertainment, and pop culture. She ADORES being a ‘Newsy’ for Brit + Co, covering all of the latest tidbits of awesomeness that you want to read about. When she’s not writing, she’s either making messy art, going on long adventurous walks with her camera, or poking around over at bohemianizm (http://www.bohemianizm.com/). You can find out about Desirée O and her work at http://DesireeO.com/ or follow her on Twitter @DesireeO.
Celebrity Baby
Celebrity News
Celebrity Baby Celebrity Couples Pregnancy Announcements
More From Celebrity News