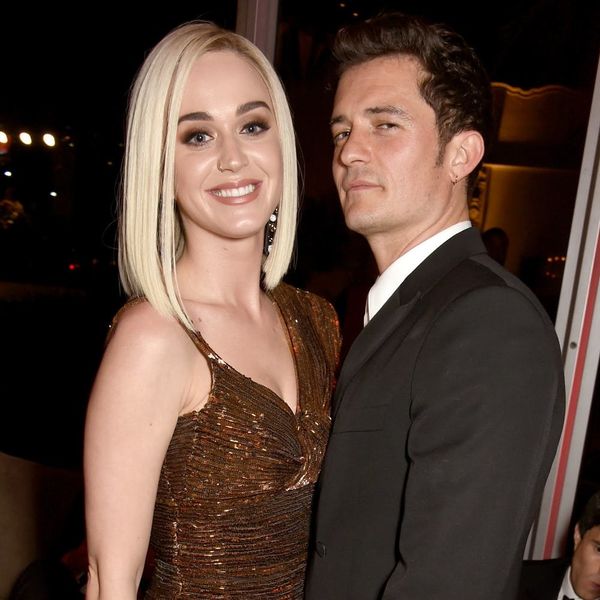 Katy Perry has been everywhere lately: from promoting her mermaid-inspired makeup collection, to hitting up awards shows like the Grammys and the BRIT Awards (where one of her backup dancers, hilariously dressed as a house, took a rather “left shark” tumble off the stage). Her sheer stage presence (not to mention her new platinum ‘do) was almost enough to make us forget she’s been largely flying solo these days.

One rather notable person in Perry’s life absent from her side at recent events has been boyfriend Orlando Bloom. Sans for a snap of the duo taken at last Sunday’s Oscars Vanity Fair party, we haven’t seen a whole lot of the power couple recently. As we learned today, that’s likely due to the fact that the pair are actually taking a break.

Perry and Bloom shared a joint statement to People magazine, which reads, “Before rumors or falsifications get out of hand, we can confirm that Orlando and Katy are taking respectful, loving space at this time.”

Now, the rumor mill is churning as to why the pair that seemed so in sync, even sparking engagement rumors, have decided to cool things down. As an exclusive Perry source told People, Bloom wasn’t exactly looking for long-term love when their romance began. “It was never really supposed to be serious between them. When it first started, she was basically like, ‘This will be fun for now.'” A separate source from the Bloom camp confirmed that statement on his end, as well, saying that the Pirates of the Caribbean actor was “happy and content,” but “not in the mindset to settle down,” and, contrary to earlier reports, which suggested otherwise, he was still “keeping his options open.”

Still, the source says there was no big blowout or dramatic goodbyes. “There was nothing dramatic or over the top. Katy’s going through a lot of changes for her new music—both physically and emotionally—and that was a part of that.” In fact, Perry’s source says that she was far more heartbroken over ex John Mayer, and that this “just ran its course.”

E! News tells a somewhat different story, with their source hinting at some not-so-kosher actions on Bloom’s part. “Katy pulled the plug,” they said. “It was a few events that happened over the past few months. They both still love each other very much, though, and getting back together could happen once they have some space.”

Considering that the couple reportedly hasn’t seen much of one another as of late anyway, with increasingly busy schedules — Bloom has been away on a UNICEF trip while Perry’s been promoting her single — we’re not so sure. Still, we’re holding out a shred of hope, if only for the sake of Bloom’s son, Flynn.

“Katy has built a really strong relationship with Flynn,” People’s source says. “It’s sad, but it will work out like it’s supposed to.” #Truth.

Do you want to see Katy get back together with Orlando? Tell us over @BritandCo.

Nicole Briese
Nicole is the weekend editor for Brit + Co who loves bringing you all the latest buzz. When she's not busy typing away into the wee hours, you can usually find her canoodling with her fur babies, rooting around in a bookstore, or rocking out at a concert of some sort (Guns N' Roses forever!). Check out all her latest musings and past work at nicolebjean.com.
Celebrity Breakups
Celebrity News
Celebrity Breakups Celebrity Couples Katy Perry love