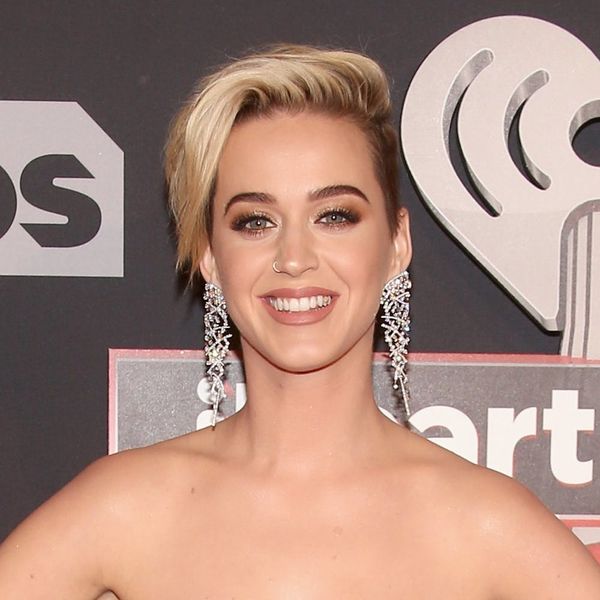 Katy Perry was totally twinning with both Miley Cyrus and Halsey this past weekend (though she’s revealed her new pixie cut was actually inspired by Scarlett Johansson), but she was all on her own while walking the red carpet for the iHeartRadio Music Awards on Sunday, which may be why there was no one to tell her that while posing for the cameras, there was quinoa in her teeth. Um, embarrassing much?

While the 32-year-old slayed her new super short ‘do and a gold-and-white August Getty Atelier jumpsuit (oh yeah, you better believe that’s a jumpsuit!), Perry flashed a wide smile for the photogs who were wildly snapping away. Unfortunately, the singer had apparently enjoyed a little nosh before heading out for the night and didn’t have time to pass a toothbrush over her pearly whites.

Posting a close-up shot of her food-filled smile to Instagram, Katy Perry included the caption, “Currently taking applications for real friends who aren’t afraid to tell me there’s quinoa in my teeth.” Lol! We’re pretty sure there are plenty of folks out there who would be willing to notify Katy of a not-so-perfect smile in exchange for friendship with the celeb.

Bout to shimmy in @stellamccartney for the #iHeartAwards @iheartradio. Tune in now!

Thankfully for Perry, she has an easy-breezy attitude toward life, which means she was easily able to shrug off the sitch and get into the groove for her iHeartRadio performance. She posted to Instagram again, this time giving fans a peek backstage, saying, “Bout to shimmy in @stellamccartney for the #iHeartAwards @iheartradio.”

We have no doubt that Katy Perry’s not dwelling on her quinoa-filled smile, although she might be brushing a little more vigorously before her next red carpet appearance.

Have you ever found yourself with food in your teeth (or something else that’s equally cringe-worthy) at an embarrassing moment? Let us know @BritandCo!

Desiree O
Desirée O is a ‘Professional Bohemian’ who loves anything and everything related to the arts, entertainment, and pop culture. She ADORES being a ‘Newsy’ for Brit + Co, covering all of the latest tidbits of awesomeness that you want to read about. When she’s not writing, she’s either making messy art, going on long adventurous walks with her camera, or poking around over at bohemianizm (http://www.bohemianizm.com/). You can find out about Desirée O and her work at http://DesireeO.com/ or follow her on Twitter @DesireeO.
Katy Perry
Celebrity News
Katy Perry