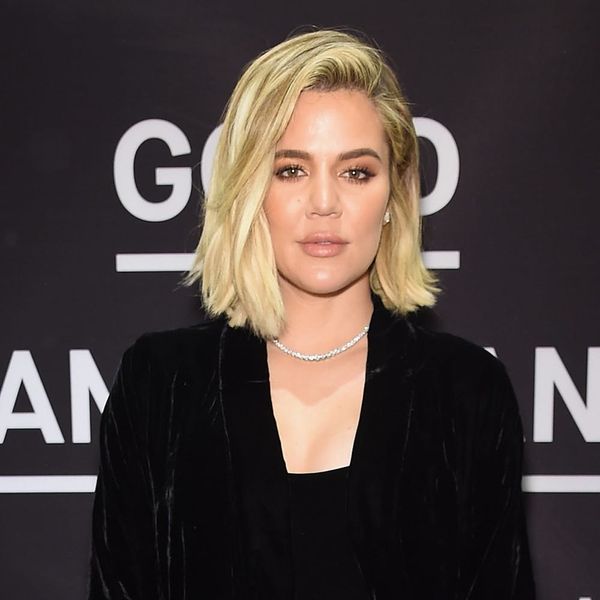 Between Kim Kardashian West, Kylie Jenner, and Khloé Kardashian, there’s a lot of baby buzz surrounding the Kardashian-Jenner clan, despite the fact that only Kardashian West’s surrogacy has been confirmed. Fans have been scanning both Jenner and Kardashian’s social media pages for any possible clue that they, too, may be with child for months (see: Kylie Jenner’s butterfly ring and polish), and many believe they spotted one this weekend on the middle Kardashian sister’s Instagram page.

Things started innocently enough, with the Keeping Up with the Kardashians star taking to Instagram to promote some new pieces from her Good American clothing line. Rocking sky-high heels, the 33-year-old showed off one of her fave tracksuits, a seriously sexy black number complete with some major fishnet cutouts.

I LOVE any cute sweat suit set! But Im obsessing over this @goodamerican fishnet set!! Easy but always cute though! 😜#GoodSquad #GoodSweats

“I LOVE any cute sweat suit set! But Im obsessing over this @goodamerican fishnet set!!” she gushed of the Fishnet Zip-Up Hoodie ($159) and Fishnet Jogger Pant ($149). “Easy but always cute though! #GoodSquad #GoodSweats.”

Things took a turn, however, when boyfriend Tristan Thompson took time out to comment on her look, posting four heart-eye emojjis to the shot (awww!), along with the word, “D*MN!”

The fashion designer answered her beau right back with a few *VERY* choice words, writing “@realtristan13 hey daddy,” along with with four heart emojis of her own. Yup, you read that right — “daddy!”

The term was enough to have fans in a tizzy as they immediately began speculating on the potentially hidden meaning behind it. Could Kardashian be confirming that the 26-year-old Cleveland Cavaliers player would soon become a father for the second time? (He has a 10-month-old son named Prince Oliver with his ex, Jordan Craig.)

For followers, the answer seemed to be a resounding ‘yes,’ with comments such as, “Hey daddy you say 😜,” “Just announce your pregnancy. You’ve called him Daddy [three] times. The news is basically out!” and “Did you just say it? Khloe…Is it official that you are having a baby?🤗Daddy Tristan…So cute🐣.”

Others, however, didn’t seem so convinced.

@khloekardashian called her man Daddy in her comments and now the world is convinced she’s pregnant 😂 I can’t!

can we all agree that when @khloekardashian calls tristan “daddy”it doesn’t confirm her pregnancy. we all know what she means when she calls him “daddy” 🙄🙄

This isn’t the first time the Revenge Body host has sparked rumors by calling her beau, who she’s been dating since September 2016, daddy. Just two months ago, she uploaded a Snap of the basketball player dancing at their Halloween bash, which she captioned “That’s daddy.”

She also used the term back in June, when she labeled a pic of herself and Thompson with the words, “Dad + Mom.”

Do you think Khloé Kardashian is expecting? Tweet us @BritandCo.