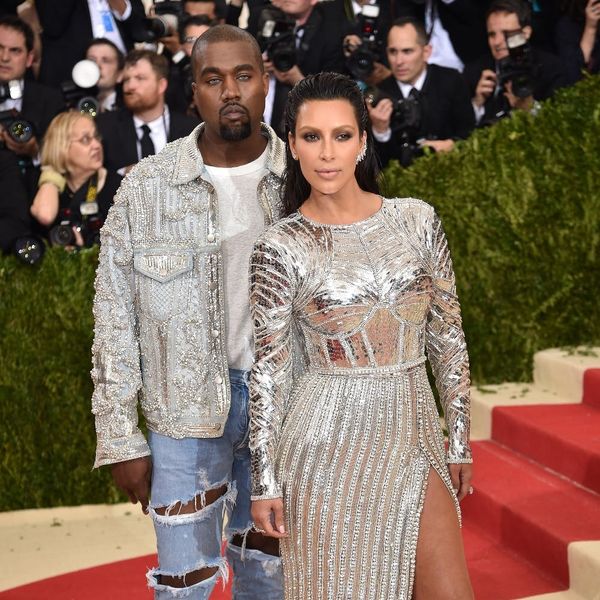 When it comes to the Met Gala, “the bolder, the better” is the name of the fashion game, and with this year’s futuristic theme, Kim Kardashian and Kanye West brought their futuristic A-game to the red carpet. It was so good, in fact, Vogue declared Kimye best dressed. That’s like prom king and prom queen of robot prom. But, between Kanye’s crazy contacts and Kim’s bleached brows, the couple’s look has been polarizing amongst the people to say the least. Let’s break it down, shall we?

Kim wore a sparkling silver full-length Rousteing-designed Balmain dress that, according to Vogue, was an interpretation of “a modern day take on a suit of armor” with an “an alluring Angelina Jolie-esque slit.” The dress took the Kardashians’ love of mirrors to an entirely new level by embellishing the entire upper sections of the dress with, yes, mirrors. Kanye West, on the other hand, sported ripped Fear of God jeans and a crystal-studded denim jacket to keep the shimmery look going.

Kim’s look was complete with some ear-climbing and finger-clasping Lorraine Schwartz gems, bleached brows that gave her a faintly alienesque look and slicked back hair. As for the makeup, she kept her lips nude and her eyes smoky, save for the silver liner in the inner corners.

Kanye’s look was ever more controversial. The rapper might be the first Met Ball attendee to show up in heavily distressed denim and suede boots — and Anna Wintour allowed it. His embellished Balmain denim jacket paired perfectly with his wife’s reflective gown, but it was his icy blue gaze that had everyone doing a double-take. Perhaps he was taking a page from younger sis-in-laws Kendall and Kylie’s books.

When @kimkardashian and Kanye West (both in @balmain) take their turn in the #ManusxMachina Experience. Directed by @gvsgvs. #MetGala

If you weren’t already riveted by Kim and Kanye’s Met Gala looks, then check out their mini-vid from Vogue’s Instagram account captioned, “When @kimkardashian and Kanye West (both in @balmain) take their turn in the #ManusxMachina Experience. Directed by @gvsgvs. #MetGala”

Did Kim and Kanye go over the top or was it just enough? Tweet us @BritandCo!