Why Kim Kardashian Is Catching Heat for Her Morning Sickness Treatment 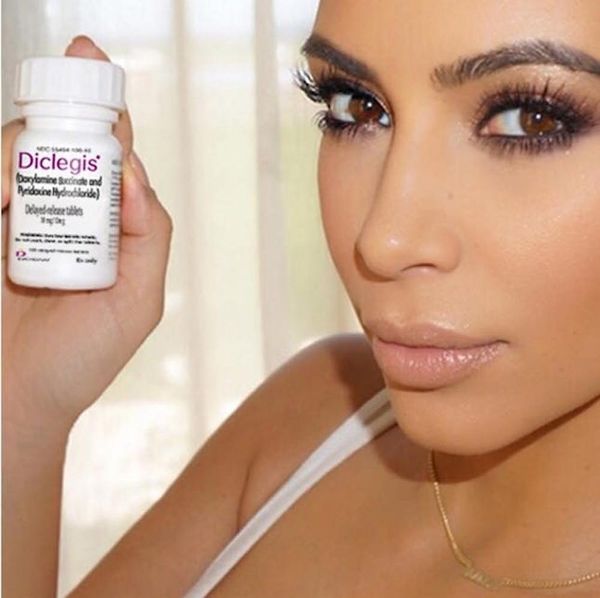 Pregnancy is an extremely exciting time with all the baby name-choosing, nursery decorating and celebrating the fact that you’re bringing a new life into the world. Even with that glow, there can be downsides — like crippling, 24-hour morning sickness. We should really just throw that misnomer out already and change it to “all-day sickness.” While science has shown that NVP, or nausea and vomiting during pregnancy, can actually be a positive thing — the study linked NVP to lower miscarriage rates — it’s still not a pleasant part of an otherwise joyous occasion. Kim Kardashian West has been extremely open about her struggle with morning sickness during her second pregnancy (she told Us Weekly at the CFDA Fashion Awards that there are days when she can “barely get out of bed”) but recently it’s causing a bit of a stir.

She posted this photo of herself with the controversial medication Diclegis on her Instagram and captioned it: “OMG. Have you heard about this? As you guys know my #morningsickness has been pretty bad. I tried changing things about my lifestyle, like my diet, but nothing helped, so I talked to my doctor. He prescribed me #Diclegis, I felt a lot better and most importantly, it’s been studied and there was no increased risk to the baby. I’m so excited and happy with my results that I’m partnering with Duchesnay USA to raise awareness about treating morning sickness.”

While some of her commenters have expressed being in the same boat, many angry commenters have been disparaging towards using medication to treat NVP. We wanted to know more about this polarizing pill, so we reached out to a doctor for the scoop.

“NVP affects about 80 percent of all pregnant women, and we usually recommend a lifestyle change or natural remedies first,” Dr. Linh Tran, M.D., an OB/GYN at Stanford Medical Center in California, told us. “If that’s ineffective, Diclegis is a first line drug that’s often prescribed.”

Diclegis, a combination of pyridoxine hydrochloride (vitamin b6) and doxylamine succinate, was originally on the market 30 years ago as Bendectine. It was then pulled after complaints and lawsuits alleging that the drug caused congenital birth defects and other issues. “It’s since been carefully tested and hasn’t shown any evidence of fetal malformation or any negative effect on the mother,” she said. The drug received FDA approval in 2013 with a Pregnancy Category A rating, which means the drug has “failed to demonstrate a risk to the fetus in the first trimester of pregnancy.”

“A lot of women like it because it’s more natural due to the vitamin b6. Of course, the other half is still a drug. Doxylamine is the same thing that’s found in Unisom, an over-the-counter sleep aid,” she told us.

There are, of course, other natural ways to treat morning sickness. “Ginger and lemon are both used to curb nausea,” recommends Dr. Tran. You can also try eating small, frequent meals, snacking on plain soda crackers, drinking lots of water and eating cold/room temp foods since hot food tends to have stronger smells.

Good luck, ladies, and stay strong. It’s all worth it in the end.

Kimberly Wang
Kimberly Wang writes about all things pop culture, tech, style, and beauty. She's a Bay Area transplant and has an MFA in Creative Writing from Columbia University. On a sunny New York day, you can find her hanging out with her mini schnauzer Isabelle Jellybean on a blanket in Central Park.
Kardashians
Health
Kardashians
More From Health