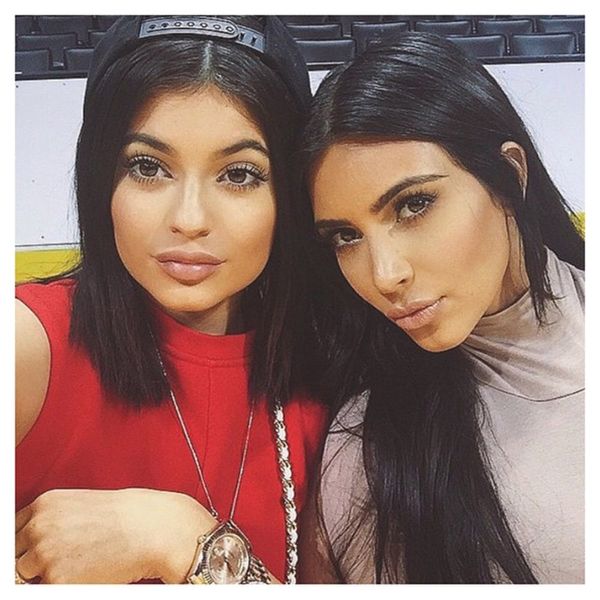 We are appreciators of fine art and arbiters of good taste — even in the most unusual places. Dinosaur vases, ombre cakes, washi tape, what have you. And so thus we felt the need to turn our critical eye to easily one of this generation’s most prolific sources of contemporary art: Instagram. But not just any commoner’s Instagram; The Kardashians‘ Instagrams.

And yes, we are including the Jenners in this art critique too. We’ll use Kardashians as a blanket term, kind of like the royal “We.” But no one should tell them we compared them to royalty — they’d like that a bit too much.

We’re rating them on a scale of one to ten with one being the least creative and least compelling and 10 being the most. 10 is the Sistine Chapel and a 1 is that weird Jesus drawing that was circulating a while ago. Ready? K, let’s begin.

Kris takes a lot of selfies. Self portraits are not unusual in the art scene — for example, Frida Khalo was known to paint several during her lifetime. Kris’s Instagram feed is a lot like Frida Khalo’s would be… if Frida Khalo insisted on painting a new self portrait every week just to brag about all the famous friends she had (or if she kept promoting Diego Rivera ad nauseam). What Kris lacks in artistic talent or imagination she makes up for by being a savvy promote-a-saurus. Honestly without her Insta I think most of us would forget Rob Kardashian had a sock line altogether.

Khloe is the only member of the family whose feed shows a clear blue period. She channels her grief into self-expression like Picasso — that is, if Picasso painted a lot of pictures of himself at the gym. We’ll call her her artistic waves L and AL (Lamar and After Lamar). The L years are full of shots of huge bouquets and as many pics of her tatted be-ringed hand as possible — a real romantic period. AL is a period of a ton of workout pictures that are empowering even in their sadness. Still she rises, phoenix-like, AL with lots of cool nail pics and even some sweet homemaker-esque snaps of tablescapes and full Thanksgiving dinner spreads. The only thing keeping this hostess with the mostess from the highest score is her penchant for posting inspirational quotes and memes, a motif derivative of your Myspace page from 2005. Also, the weird hijab incident :/

Despite the revelation of her true gender identity, Caitlyn Jenner’s artistic choices are still that of the hokey parent she will always be. Her beautiful Vanity Fair cover sits alongside a cheesy photo of baby Brandon Jenner on his birthday, sort of mixing the past and the present. Still, there is a palpable joie de vivre in Caitlyn’s work, and she is bursting with potential.

Rodin had oils and Michelangelo had marble, but Kylie Jenner’s chosen medium is car selfies. Since getting her license, Kylie’s whip has served as the backdrop for most of her selfies and she has mastered the perfect arm extension to take them (selfie sticks are for wimps!). The exaggerated use of the lips is also a recent featured motif. The artist is careful to always show her impeccable style even when shilling for the products she’s the face of. Her style is on point and she knows it. Points removed for posting nonsensical Kardashian memes, the time she quoted herself and whatever this was.

Kim is notorious for taking self portraits. While Van Gogh painted himself missing an ear, Kim shows herself “accidentally” falling asleep with makeup on. Here, we see that both artists convey a certain vulnerability. Her pieces include themes of vanity and beauty and what fame really means. Her body of work excels when it comes to pics of her otherworldly cute daughter/muse North. One must admire her sheer audacity at cropping said ball of cuteness out of a picture because “her eyes were closed and I was feeling my look.” With this truncated Madonna and Child, Kim asks the essential question “can I live?” Points taken off for the swaths of pics of her from press shoots; they’re unoriginal and if we wanted that we’d subscribe to US Weekly instead of just reading it at the nail salon.

Kendall’s Instagram is an important retrospective on the life of a young model. Her audience feels like part of her journey, with candid backstage shots and silly poses that all have the sun exposed aesthetic of an Urban Outfitters catalog. Kendall’s Instagram is interesting because it juxtaposes perfect model pics with pictures any 20-something would take of their friends. It should also be noted that she’s the member of the family that endorses products the least on her feed. She replaces them with selfies, somehow implying that she herself is the product. Also that one butt pic is on point.

Kourtney’s is easily the most well-curated feeds of her whole family. Her motifs include still-life portraits with various kid’s foods or perfectly white tableware. Her selfies showcase her superb taste in outfits (special shout out to her use of braids and headdresses). Her throwback collection highlights how skinny she once was and her current selfies show how skinny she is now. Her other featured subjects are her adorable kids and Lord Disick (which is a good way to see the Lord without having to wade through the annoying protein powder ads on his own feed). Overall her aesthetic is breezy and well coordinated, and we are more jealous of her life with every snap.

Many artists go back and revise their work once it’s “finished,” and Rob is no different. The masterpiece of his collection used to be his satirical piece comparing Kim to the, ahem, lead character “from Gone Girl.” However, that pic has gone the way of The Library of Alexandria. Rob’s current work is minimalist to say the least and only three of his pictures even have people in them.

Which is your favorite Kardashian Instagram? Tell us in the comments!

Molly Sanchez
Molly Sanchez is a writer, comedian and lover of burritos everywhere. She has written for The Bold Italic, Liquid Bread, Thrillist and HelloGiggles. She devotes her time to Bloody Mary research, exploring San Francisco and promoting wide spread shower beer awareness and appreciation. Find her on Twitter @seriousmolly trying to get famous people to laugh at her jokes or on Instagram @mollyfuckingsanchez where she swears a lot.
Kardashians
Home News
Kardashians