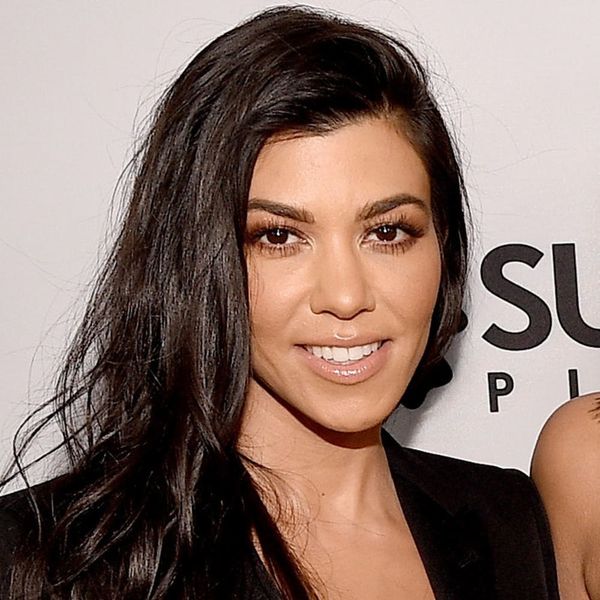 For the most part, the Kardashian-Jenners have never shied from experimenting with a little bleach: Kim Kardashian, Khloé Kardashian, Kylie Jenner, and Kendall Jenner have all gone blonde, heck, even platinum at one point or another. As for Kourtney Kardashian, the reality star has never strayed from her dark tresses… until now.

Kardashian went blonde and we don’t even recognize her. Okay, okay, just to clarify, she’s just wearing a wig (a fave accessory of little sis Kylie) for a yet-to-be-aired skit on Jimmy Kimmel Live!. But she still looks. SO. DIFFERENT.

The Keeping Up With the Kardashians star was spotted around LA filming a segment for Kimmel’s famous “Lie Witness News,” rocking a long, blonde wig with bangs. She also disguised her famous mug by wearing a prosthetic nose to boot. She finished off her look with what appeared to be a flight attendant’s navy suit jacket and skirt and a colorful red silk neck scarf.

There’s some speculation she’ll be taking a stab at the most recent dramas involving airlines such as United and American, and with her knack for comedic one-liners, we can’t wait to see what the mother-of-three has in store for us.

And who knows? Maybe the wig will inspire her to actually head to the salon for a change in hue?

What do you think of Kourtney’s new look? Tell us over @BritandCo.

Nicole Briese
Nicole is the weekend editor for Brit + Co who loves bringing you all the latest buzz. When she's not busy typing away into the wee hours, you can usually find her canoodling with her fur babies, rooting around in a bookstore, or rocking out at a concert of some sort (Guns N' Roses forever!). Check out all her latest musings and past work at nicolebjean.com.
Hair Color
Hair
Hair Color Kardashians