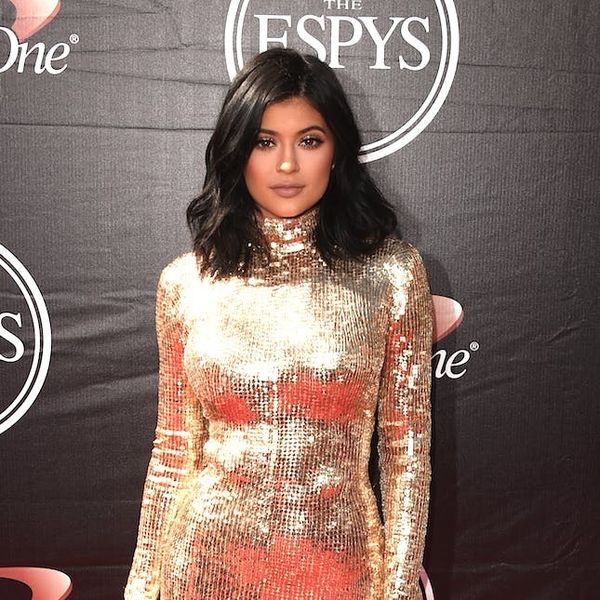 Kylie Jenner has had one epically monumental summer — she graduated high school, debuted a future line of shoes with sister Kendall, launched a beauty blog and turned 18. Not to mention, girl has changed her hair about 50,000 times, and sent the beauty world into a tizzy pretty much every time it’s happened. Yup, all before being legal to vote. Well, Kylie’s done it again — this time by going with a brand new hair color that, frankly, given that she’s a Kardashian-Jenner, we’re surprised she hasn’t explored sooner.

She’s gone blonde. While out celebrating her 18th for the second night in a row, the KUWTK star unveiled her brand new platinum locks — and daaaang, she looks good. Kim previously shattered the Internet by sporting a short, Jared Leto-esque blonde coif during Paris Fashion Week, Kendall Jenner has dabbled with golden tresses, and even Khloé is known for sporting a lighter-shaded hair color. And now, Kylie.

For a closer look at Kylie’s new mane, here’s a pic big sis Kim posted from the same night, which she affectionately captioned, “Bad bitch contest you’re in first place.” Rather than going all-blonde, Kylie deliberately kept her roots dark for a grown-out, relaxed look.

While the golden hair looks good on her, being the style chameleon she is, she’ll probably be sporting a brand new color in about two minutes. Let’s all enjoy it while it lasts.

What do you think of Kylie’s new hair color? Tell us in the comments below!

Kimberly Wang
Kimberly Wang writes about all things pop culture, tech, style, and beauty. She's a Bay Area transplant and has an MFA in Creative Writing from Columbia University. On a sunny New York day, you can find her hanging out with her mini schnauzer Isabelle Jellybean on a blanket in Central Park.
Celebrity Hair
Fashion
Celebrity Hair Hair Color Kardashians