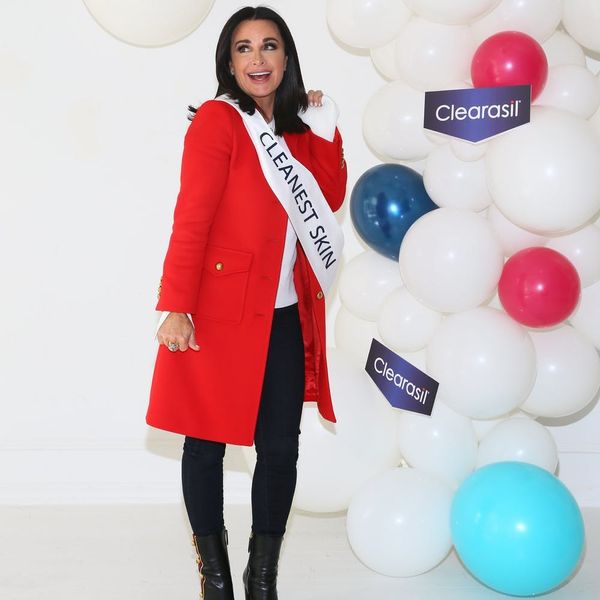 Aside from her new lob — which is quite the departure from the long strands we’ve come to know and love — very little has changed in Kyle Richards’ beauty routine over the years. The Real Housewives of Beverly Hills star’s multi-step skincare routine rivals that of any K-Beauty guru, but you won’t find her dropping her well-earned reality tv coins on pricey face products. The mom of four has managed to maintain her youthful appearance with a surprising stable of drugstore faves, including her latest collaboration with a brand that she’s used since she was a teenager.

Having raised four daughters, growing up with two older sisters, and making a career for herself in front of the camera, Richards certainly knows a thing or two about skincare — more specifically, acne. So teaming up with Clearasil to talk about having serious skin convos with teens was a no-brainer for her. “It’s a brand that I’ve known and used my whole life. For my daughters it’s the first thing I would grab to help them take care of their skin,” she says. “Acne can really rob you of your confidence and I feel like it’s important to talk about it.” And have an arsenal of products at the ready. As a subtle hint, Richards left products around the house for her daughters to use instead of overtly coming out and telling them that they should switch up their skincare.

As for taking care of her complexion, the American Woman producer and creator admits that her lengthy beauty routine “annoys the hell out of” her husband, Mauricio Umansky. “At night I cleanse, exfoliate, tone, and then I alternate between a glycolic acid, an oil, a gel, and a cream — or I just wash and tone,” she explains. While so many steps can add up dollar-wise, Richards sticks to budget buys. “The expensive creams have never really worked for me, so I don’t buy them,” Richards explains, adding that when she does splurge, she goes for a heavier eye cream or night cream. Her favorite drugstore purchases include the Clearasil Stubborn Acne Control 5in1 Weekly Face Scrub ($7) and L’Oréal Paris Voluminous Mascara ($6), which she swears by. The secret to her lush locks is also a bargain; Richards suds up with her tried and true Pantene shampoo, of course.

Rather than depending on a glam squad, Richards has actually become the resident makeup artist in her crew of friends and family. She even did her daughter’s makeup (and all of her friends) for their senior portraits. “I’ve been learning tips since my Little House on the Prairie days,” she says. Now she picks up new tricks from Instagram and YouTube, not all of them successes. Of all her beauty experiments over the years, her biggest regret was getting lash extensions. “All of my lashes fell out. I would never do that again,” Richards laments.