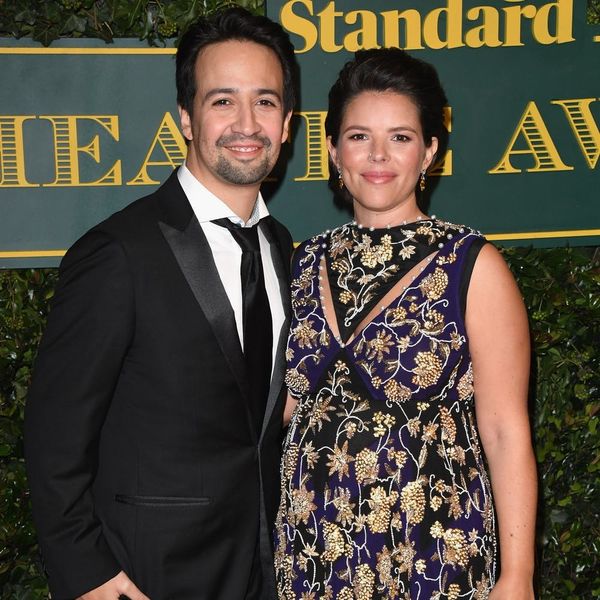 Life is wonderfully busy for Lin-Manuel Miranda. In addition to singing the updated Magic School Bus theme, he’s starring in the upcoming Mary Poppins sequel, writing music for the live-action Little Mermaid movie, working on the London production of Hamilton, and preparing for his return to the stage when the show opens in Puerto Rico in 2019. And things are about to get even more exciting for the star, as he and his wife, Vanessa Nadal, are expecting their second child.

Appearing at the 2017 London Evening Standard Theatre Awards in London on Sunday, December 3, Miranda and Nadal, a lawyer and scientist, posed on the red carpet together. After the Tony-winning composer shared a pic of himself and his lady on Twitter, a fan asked, “is v..?” To which an enthusiastic Miranda replied, “Oh hell yeah.”

The 37-year-old, who’s already the proud dad of three-year-old Sebastian, added that his son is thrilled about becoming a big brother and can’t wait for the new arrival. “He is so impatient for it,” Miranda tweeted in response to another fan. “Once, mid-tantrum, he cried, ‘When is mommy gonna HAAAATCH…'” Too cute!

He is so impatient for it. Once, mid-tantrum, he cried, "When is mommy gonna HAAAATCH…" https://t.co/QdJ8Ck3V1w

Last year, the Grammy winner told People that his “favorite thing to do” when he isn’t working is walking his dog and taking his kid to the park. “Those are the two best things in my life,” he said at the time. And one of those things is about to get even better, as he’ll soon have two little ones to join him on park days!

Was your little one impatient for a sibling? Let us know @BritandCo!