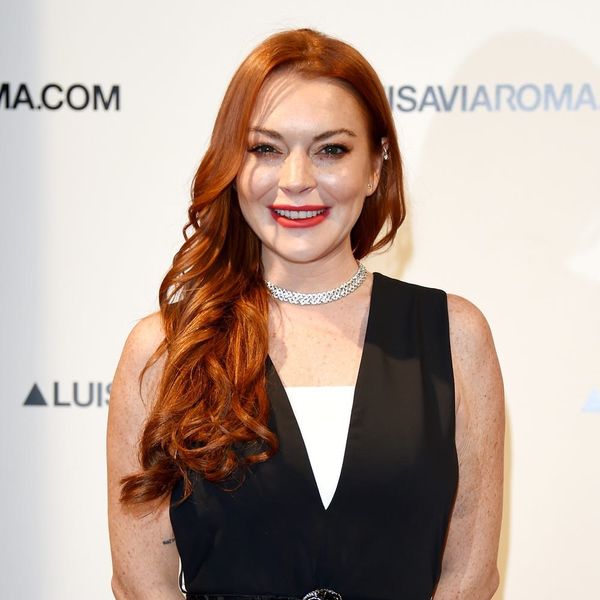 It seems like just yesterday that a baby-faced Lindsay Lohan was bursting on the scene as double trouble in Disney's remake of its1961 film, The Parent Trap , but believe it or not, today marks the star's 31st birthday! In honor of our favorite Mean Girl, (who just launched her very own lifestyle website) we're taking a look at some of her most epic throwbacks throughout the years, from her belly-shirt-baring days to her stint as a stand-in for Paris Hilton's bestie. Click on to travel back in time with us!

Young and Babyfaced: Nowadays, she’s an internationally recognized star, but back in 2001, Lohan was just a fresh-faced teen coming into her own. (Photo via George de Sota/Getty)
Baring All: With both The Parent Trap and Freaky Friday under her belt, Lohan's star was quickly rising, and she cemented her status as an aughts fashion icon by baring her belly on the red carpet in 2003. (Photo via Frederick M. Brown/Getty)
Menswear Inspired: It’s been 14 years since LiLo walked the red carpet at the 2003 MTV Movie Awards, and we’re still trying to figure out her cropped mini over-the-shirt bustier ensemble. (Photo via Evan Agostini/Getty)
Spring Break Ready: In 2004, now on the brink of her Mean Girls success, Lohan was the perfect poster child for MTV's rowdy spring break antics in her gauzy yellow butterfly halter top and denim shorts. (Photo via Scott Gries)
Suiting Up: At the height of the Herbie: Fully Loaded star's fame, she suited up for the 2004 MTV Movie Awards in a white silky tux that offset her flaming red locks. (Photo via Kevin Winter/Getty)
So 2000s: Armed with her T-Mobile sidekick and her sequined shrug, the 2000s were in full swing, and the then 18-year-old was right on trend. (Photo via Frazer Harrison/Getty)
Twinning With Paris: Lohan showed off her wilder side with a new blonde ‘do to match pal Paris Hilton’s back in 2005. (Photo via Michale Buckner/Getty)
Boho Babe: What a difference a few months makes! Is that Lohan or Stevie Nicks with that feathered ‘do and gypsy-esque bell-sleeved mini dress at the 2005 American Music Awards? (Photo via Vince Bucci/Getty)
Robed and Ready: The actress was back to blonde, but not quite showing it off in a sequined, hooded Brian Lichtenberg number (also owned by Kim Kardashian West and Katy Perry) for the 2010 Golden Globes. (Photo via Kevork Djansezian/Getty)
Blonde (Banged) Ambition: Our gal switched things up in 2012 with the addition of bangs for her post-jail comeback. (Photo via Jamie McCarthy/Getty)

Back to Her Roots: More recently, she's found her way back to her roots with a Grace Kelly-like transformation that had us doing a double take. Happy birthday, Lilo! (Photo via Philip Rock/Getty)

Which Lindsay was your fave? Let us know over @BritandCo.