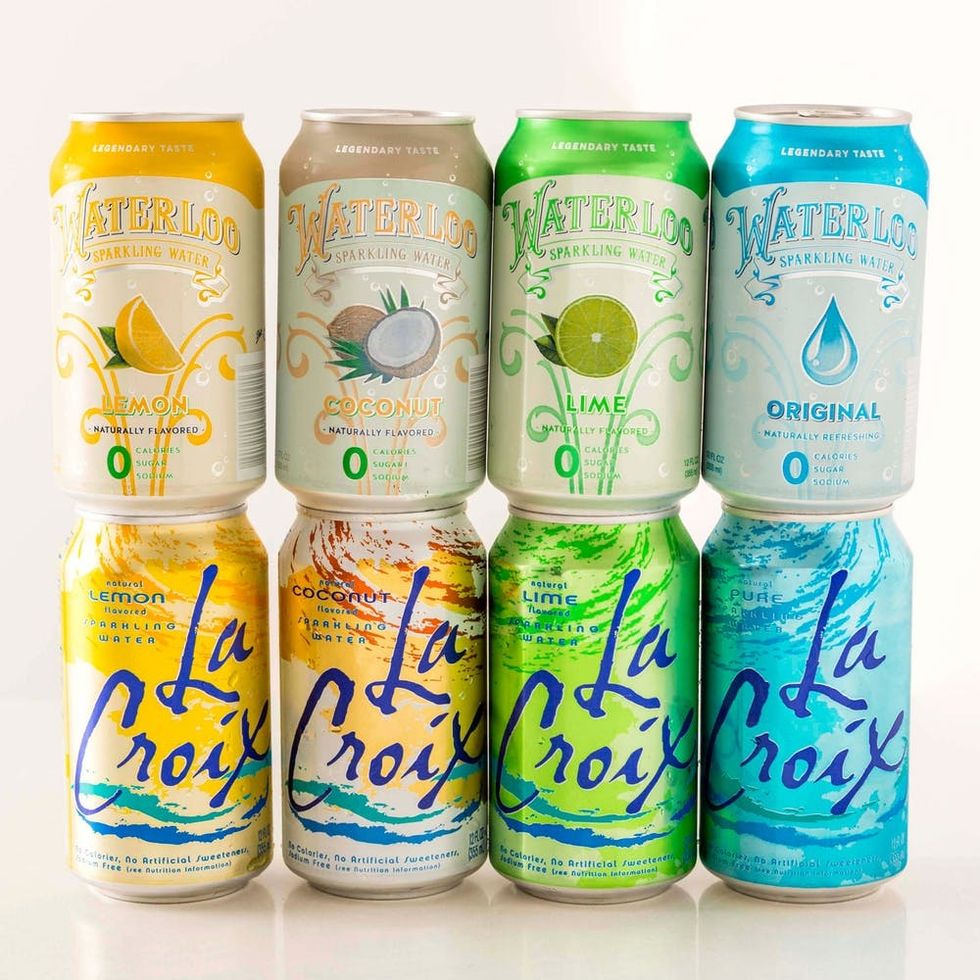 There’s another canned, flavored sparkling water on the market called Waterloo, and after conducting an extensive taste test comparison, Brit + Co has determined it’s way, WAY better than La Croix. Before you close this window in protest due to this alarming news, hear us out! We didn’t want it to be true either, but we had to know… after all, you want to spend your hard-earned dollars on the most delicious-tasting bubbles.

We were first introduced to Waterloo after Whole30 named its watermelon flavor one of the best Paleo products at Whole Foods. After blowing our taste buds away, we had a chance to taste Waterloo’s entire lineup (black cherry, grapefruit, watermelon, original, coconut, lime, and lemon) against the respective La Croix flavors and sought to determine the real sparkling MVPs. Though they both are sugar-free and sodium-free, contain zero calories, and cost the same price ($6 for 12 cans), these two brands are miles apart in flavor. Here’s what we discovered:

La Croix has big, throat-burning bubbles and a harsh, almost metallic finish compared to Waterloo, which tastes more effervescent and has a smooth, clean ending. According to its FAQ page, La Croix Sparkling Water comes from “various locations throughout the US” and undergoes a triple-filtration including reverse osmosis and deionization to remove any water impurities. Waterloo relies on vapor-distilled water and cold forced carbonation. While we don’t know the science behind why that process yields a better-tasting product, our taste buds had no trouble distinguishing Waterloo from La Croix.

What exactly are the “Natural Flavors” found in the ingredients for each can? La Croix claims they are “derived from the natural essence oils extracted from the named fruit used in each of our La Croix flavors” and asserts there are no artificial ingredients “contained in, nor added to, these extracted flavors.” Waterloo says its Natural Flavors contain “aromatic extracts” that are “captured from the steam that boils off real fruit” plus “flavor notes… captured using extremely high pressure equipment which squeezes the concentration of oils out.”

Whatever extra mile Waterloo goes to extract those flavors, it clearly comes through. Each flavor really tastes like the fruit on the label and is juicy with a slightly sweet finish. Pamplemousse has NOTHING on Waterloo’s tart and tangy grapefruit. Waterloo’s watermelon actually tastes like the ripe summer fruit. Of all the flavors, those were our favorites, though lime burst with freshness, coconut tasted like the tropics, and black cherry had a delish, almost-sweet taste. The only flavor we couldn’t quite get behind is Waterloo’s lemon; the intense citrus gave it an almost Lysol-like quality.

We know — it’s so hard to believe that anything could be better than La Croix, but this cult favorite has finally met its match. Try it for yourself to taste the difference. Then don’t be surprised if Waterloo makes its way into your daily routine, your weekend mocktails, and next year’s Halloween costume.

From Your Site Articles
Anna Monette Roberts
As Brit + Co's Food Editor, Anna Monette Roberts has an insatiable appetite for developing tasty dishes. When she's not dreaming about her next meal, she's . . . well, probably cooking up her creations. Her favorite foods include chewy chocolate chip cookies, Rosé Champagne, and gooey French cheeses — in no particular order.
Adulting
Healthy Eating
The Conversation

How To Make Hot Honey At Home