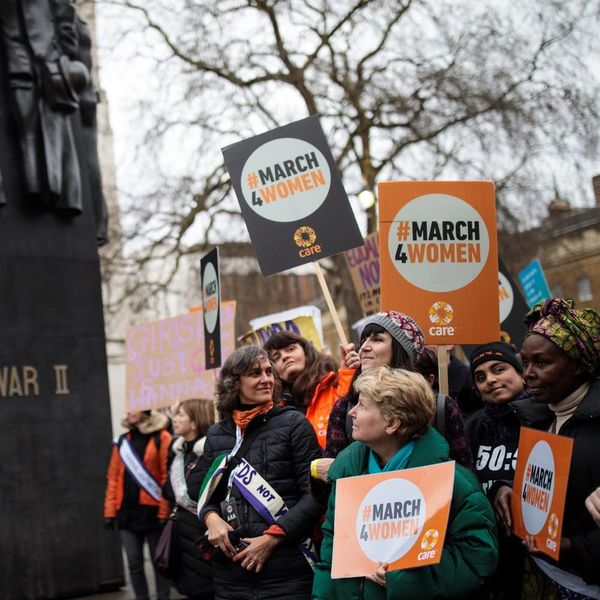 We’ve all heard about breaking through the glass ceiling, but what about the bronze ceiling? A letter signed by more than 40 high profile British men aims to do just that — by calling for the erection a memorial statue of early British feminist Mary Wollstonecraft.

In an open letter to the Guardian, the signatories — which include Labour Party leader Jeremy Corbyn and actors Sam West and Jason Isaacs — ask the public to support “Mary on the Green,” a campaign to construct a memorial to Wollstonecraft at Newington Green in London. There will also be a petition launched on March 8 — International Women’s Day — in support of the campaign.

Wollstonecraft was a writer and public figure who way back in 1792 penned A Vindication of the Rights of Woman. In it, she argues that women are equal to men and only appear inferior due to lack of education and opportunity. She was a dyed-in-the-wool human rights activist, brilliant academic, war correspondent, and the mom of Frankenstein author Mary Shelley. A lady way ahead of her time, to be sure, and one of the world’s early and most influential feminists. So why is she not commemorated in the British capital, like so many historic British men?

In their open letter, the men point out that statues of those Wollstonecraft influenced, like Millicent Fawcett, Thomas Paine, and William Gladstone, already stand in London’s parks and squares. In a line that was perhaps included to quell male fears of Wollstonecraft’s feminist power, the men point out that she called for women not “to have power over men but over themselves.”

The push to get Wollstonecraft recognized in statue form was actually started last International Women’s Day by 80 female politicians, academics, and public figures. According to the “Mary on the Green” campaign they created, “Over 90 percent of London’s statues commemorate men, leaving many incredible women uncelebrated and ignored, like Mary Wollstonecraft.” The campaign has so far earned more than $80,000 in donations of the $277,820 they say they will need to get the project off the ground.

With more than 120 prominent men and women now supporting the initiative, a bronze memorial of one of feminism’s early badasses seems all but inevitable.

“Her life sends a message of encouragement to young people in a world divided along gender and class lines,” says the campaign. “Wollstonecraft’s work is far from done.”

What do you think? Tell us @britandco!

Lia Grainger
Lia Grainger is a freelance journalist and reluctant nomad who divides her time between Canada and Spain, weather dependent. She's written for The Atlantic, Reader's Digest, the Toronto Star and other print and online publications, and her work appears in dozens of languages around the world.
Feminism
Current Events
Feminism