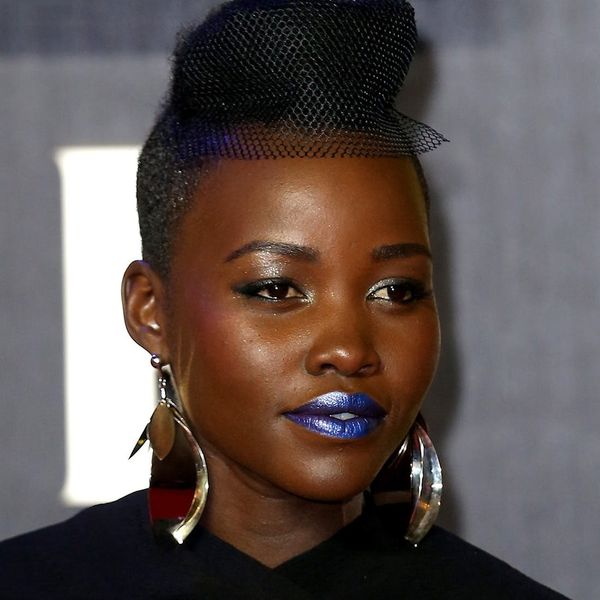 The verdict is still out on the recent release of the new Star Wars movie, but one thing is for sure: The celeb style spotted at the film’s multiple premieres has been totally killing it. At the LA event, Zendaya showed up rocking the coolest cozy girl outfit ever, and Joseph Gordon-Levitt went full Yoda on us (face paint and all). But, not surprisingly, the queen of the intergalactic red carpet has been Lupita Nyong’o.

The super talented actress and style icon rocked a sparkly silver gown by Alexandre Vauthier Couture at the Hollywood premiere, but it looks like she’s decided to take things to another level for the London debut. While on the other side of the pond, Lupita paired a stand-out shade of metallic blue lipstick with with a mesh hair accessory. Lupita shared the look on her Instagram alongside the caption, “We’re calling it the #MeshKanata. Ha.” Just in case you’re a Star Wars newbie, Lupita is putting a punny spin on her Star Wars character’s name, Maz Kanata.

This isn’t the first time Lupita has gotten creative with her hairstyle. During the summer when she and her crew were camping in Kenya sans a spray bottle, she decided to use the steam from an iron instead. Lupita, if the whole acting thing doesn’t work out, we’re thinking you definitely have a job in the beauty industry.

Would you try Lupita’s unique hair accessory? Tell us what you think on Twitter @britandco.