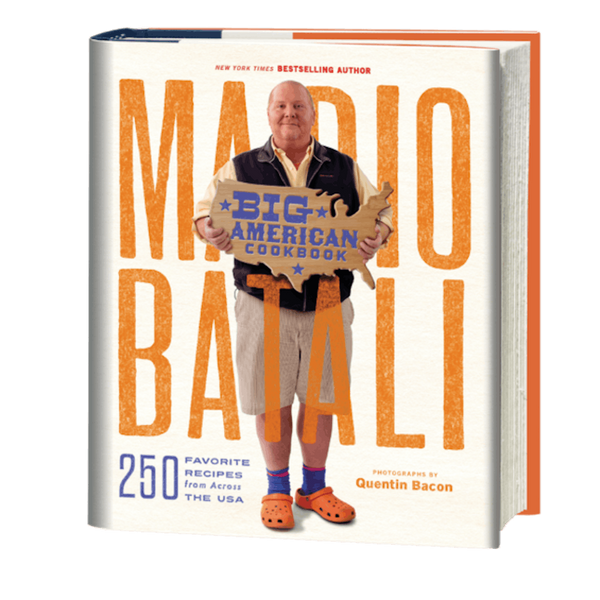 Mario Batali might have first made his name as a chef and Food Network personality, but the celeb chef has gone on to build a veritable food empire — his hospitality group operates 25 restaurants in 12 cities across the US (BABBO Ristorante e Enoteca and Eataly in NYC are both must-stops for many a travel itinerary).

As a result, Mario knows a thing or two about American cuisine, and recently, with his wealth of knowledge, he published a cookbook titled Big American Cookbook: 250 Favorite Recipes from Across the USA — and yes, the cover DOES feature his famous orange Crocs. While every recipe in the trove is delish, he has some favorites. Mario shared with us his picks for his fave five and even told us why these made the top of his list — check ’em out below!

“If you see a Sweet Potato Pie sporting a marshmallow top, you’re probably looking at one made by a Northerner,” writes Mario in his the Big American Cookbook (Grand Central Life & Style 2016). “Some people put marshmallows on their sweet potato side dish at Thanksgiving, but true Southerners don’t put them on Sweet Potato Pie.” Mario even made a special sweet potato pie for us on our very own Brit + Co for Cheeky plates!

1. Preheat the oven to 400 degrees Fahrenheit.

2. Line a baking sheet with foil or a silicon mat. Prick each potato several times with the tip of a small, sharp knife. Place on the baking sheet and roast for 60 minutes, turning them over halfway through, until soft. When cool enough to handle, remove the skins, put the flesh in a large bowl and mash with a fork.

3. Pre-bake the prepared pie crust for 12 minutes, until just tan. (You can put it in the oven during the last 12 minutes of the potatoes roasting.) Reduce the oven temperature to 350 degrees Fahrenheit.

4. In the bowl of a stand mixer with the paddle attachment, combine the eggs, butter, sugar, half-and-half, bourbon (if you like), molasses, vanilla and nutmeg until smooth. Add the roasted sweet potato and mix to form a smooth filling.

5. Pour the filling into the pie crust and bake for 45 minutes, until the filling begins to set. Allow to cool to room temperature. Serve with softly whipped cream and a drizzle of molasses, if you like.

1. In a large bowl, combine flour, salt and baking powder. Add the butter and toss to coat in the flour, then mix with a pastry blender — or the back of a fork, though that will take longer — until the butter is cut into tiny bits and incorporated through the dough. Add six tablespoons of the ice water and mix in until the dough just comes together, adding more water a tablespoonful at a time, if necessary. (The ingredients can be mixed in a food processor, but should be done in two batches.)

2. Dust a work surface with flour and turn the dough out of the bowl. Cut it in half and form two discs. Dust them with more flour, then wrap in plastic wrap and refrigerate for at least two hours or up to two days.

3. When ready to roll out the crust, dust your work surface and use a rolling pin to roll out the dough to at least 12 inches across. Carefully line a pie pan with the dough and cut away any excess hanging over the sides. Refrigerate the crust until ready to fill. The second disc can be used for another pie, or as a top crust in double-crusted pies.

This recipe comes straight out of his America Farm to Table (Grand Central Life & Style 2014) cookbook. “When you’re entertaining a group or just in the mood for a lot of oysters, barbecuing is, in my opinion, the simplest and best way to prepare them,” says Mario. “My suggestion: Always add plenty of hot sauce, no matter the preparation!”

1. Preheat the grill or barbecue. Spread rock salt evenly on a serving tray.

2. Place the butter and garlic in a small saucepan and melt the butter over low heat. Add the parsley, cocktail sauce and hot sauce, transfer to a small bowl and set aside.

3. Shuck the oysters and carefully loosen them from the bottom shell, leaving the oyster on the half-shell. Place a scant teaspoon of the butter mixture on top of each oyster and then place them on the grill, shell-side down, and cook until the oyster bubbles and curls up at the edges.

4. Place the cooked oysters, still in their shell, on the rock salt-lined tray, and serve.

This spicy, savory breakfast dish, excerpted from America Farm to Table (Grand Central Life & Style 2014), comes to us from the Lone Star State… kind of. “What most likely originated as a dish to use up leftovers is not authentically Texan but it sure does make sense there, especially if you add some hot chiles,” Mario tells us. “I love to play around with different proteins like turkey or chicken to personalize this dish.”

1. Preheat the oven to 450 degrees Fahrenheit.

2. Cut off the beet greens and reserve them for ravioli filling or soup. Scrub the beets, toss them with one tablespoon of the olive oil and spread them in a baking pan. Roast until very tender, 50-60 minutes. Let cool slightly, then rub off the skins under running water. Cut into 1/4-inch dice and set aside.

3. Place the potatoes in a saucepan, cover with cold water and add two tablespoons salt. Bring to a boil and cook until tender, about 20 minutes. Peel, cut into 1/4-inch dice and set aside.

4. In a 12-inch cast-iron skillet, melt six tablespoons of the butter over medium-high heat. Split the ancho chiles and remove the seeds, then cut them into thin strips and toss them into the pan with the beets, potatoes and corned beef and season with salt and pepper. Toss and cook until heated through, about 10 minutes. Add the Worcestershire and cilantro and reduce the heat to low. Once the hash is crispy, turn off the heat and let it set for five to 10 minutes. This will help to keep it together when slicing.

5. Meanwhile, in a 12-inch nonstick pan, heat the remaining one tablespoon butter and one tablespoon olive oil over medium heat. Once it has foamed and subsided, crack the eggs into the pan, season with salt and pepper, and fry to the desired doneness.

6. Serve the hash, topping each portion with a fried egg, with Texas Pete hot sauce on the side.

This tasty recipe comes out of The Big American Cookbook (Grand Central Life & Style 2016). As to why he chose this sandwich, Mario says, “The cheesesteak is one of those terrific iconic American foods integral to Philadelphia’s identity.” And it can certainly be a polarizing sandwich. “Ask someone from Philly about the type of bread or cheese they prefer and you might incite some strong opinions,” Mario tells us, “So just go with mine… a sub roll and provolone cheese!” Sounds good to us.

1. Heat the oil in a large skillet, preferably cast iron, over medium-high heat. Add the onion and sauté until it begins to soften, about five minutes. Add the bell pepper, mushrooms and salt to taste and sauté until they’re softened and the mushrooms begin to brown. Remove from the pan and set aside.

2. Turn the heat under the skillet up to high.

3. Season the meat aggressively with salt and pepper. Working in batches if necessary, add meat to the hot pan and cook, without turning, until dark brown on the first side, one to two minutes. Turn the steaks, cook briefly and push to the side of the pan to give you room to cook more of the meat. Repeat until all the meat is cooked, then splash the vinegar in the pan, and cook until the vinegar is gone, probably another 30 seconds.

4. Divide the cheese among the sub rolls, then top with the meat and the onion mixture. Place the sandwiches under the broiler to melt the cheese. Serve hot.

5. Special Mario Batali Add-On: In Philly, they always offer chopped hot cherry peppers in the little condiment trolley outside. I slather them on with the same abandon as Roman Gabriel’s long bombs.

“If you’ve never been to Café du Monde in New Orleans, stop reading right now and book a flight!” Mario writes in The Big American Cookbook (Grand Central Life & Style 2016). “If you can’t make it, replicating these fried dough squares at home is easy to do, but for the full effect, add in a strong cup of café au lait and maybe some Dixieland jazz playing in the background.” Thanks for the suggestion, Mario!

1. In a large bowl, dissolve the yeast in the warm water. When it begins to foam, add the egg, milk, melted butter, granulated sugar, nutmeg and salt, and stir to combine. Mix in the flour until a dough forms. Cover with a towel and let rise for an hour or two, or refrigerate overnight.

2. In a large, heavy pot or Dutch oven, heat about two inches of oil to 375 degrees Fahrenheit.

3. Dust a work surface with flour and roll out the dough to about 1/2 inch thick. Cut into about two dozen two-inch squares. Working in batches, fry the beignets for one to two minutes per side, until just golden brown. Drain on paper towels.

4. While they’re still warm, put two or three on a plate, shake confectioners’ sugar on them and watch them disappear.

Do you have a fave regional recipe? Share it with us @BritandCo!

Kimberly Wang
Kimberly Wang writes about all things pop culture, tech, style, and beauty. She's a Bay Area transplant and has an MFA in Creative Writing from Columbia University. On a sunny New York day, you can find her hanging out with her mini schnauzer Isabelle Jellybean on a blanket in Central Park.
Food Trends
Food News
Food Trends interview recipe roundup
The Conversation
Reviews:
More From Food News