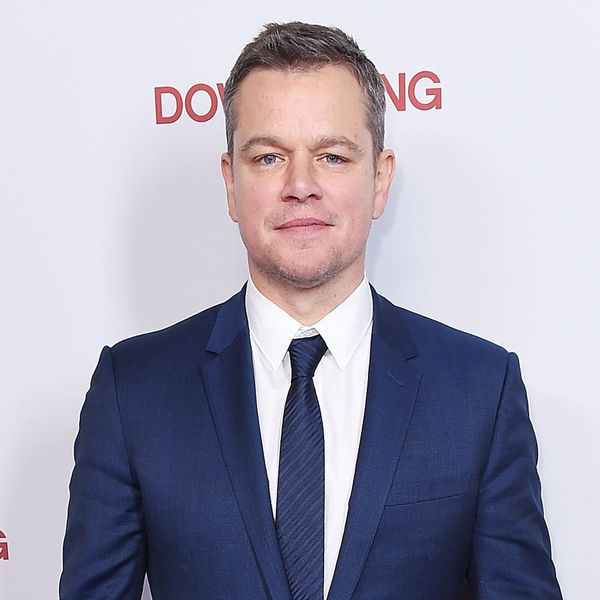 As the reckoning against sexual harassment and assault continues in Hollywood, some people, such as Mayim Bialik, Angela Lansbury, and Stassi Schroeder, have found themselves in hot water for comments that many read as placing the blame on the victims. Now, Matt Damon is facing backlash for a new interview in which he shares some controversial feelings on a number of the high-profile men who have made headlines in recent weeks.

“I think we’re in this watershed moment. I think it’s great. I think it’s wonderful that women are feeling empowered to tell their stories — and it’s totally necessary,” Damon said while appearing on ABC News’ Popcorn With Peter Travers. But the Downsizing actor also said that he thinks not all of the allegations carry the same weight, and that some actions — like those by comedian Louis C.K. — are “just kind of shameful and gross,” and don’t necessarily mean someone shouldn’t get a second chance.

“I do believe there’s a spectrum of behavior,” he said. “There’s a difference between patting someone on the butt and rape or child molestation, right? Both of those behaviors need to be confronted and eradicated without question, but they shouldn’t be conflated.” Damon went on to say that, in C.K.’s case, by confirming the multiple allegations against himself, he seems like someone who has taken responsibility, and that “we can work with that.”

“I don’t know Louis C.K. I’ve never met him. I’m a fan of his, but I don’t imagine he’s going to do those things again,” Damon added. “You know what I mean? I imagine the price that he’s paid at this point is so beyond anything.”

Throughout the interview, Damon also touched on what he called the current “culture of outrage” and a few of the recent high-profile allegations, including those against Senator Al Franken (“that is just like a terrible joke, and it’s not funny”), Kevin Spacey, and the one that started it all, longtime business associate Harvey Weinstein.

“Nobody who made movies for him knew. … Any human being would have put a stop to that, no matter who he was. They would’ve said absolutely no. You know what I mean?” Damon — who has denied allegations that he was involved in the scrapping of a 2004 NYT story on Weinstein — said.

Social media responded swiftly to Damon’s comments, with reactions ranging from defeated to incredulous to calling for his cancellation. So far, he has not commented further on the interview.

What did you think of Matt Damon’s comments? Let us know @BritandCo.