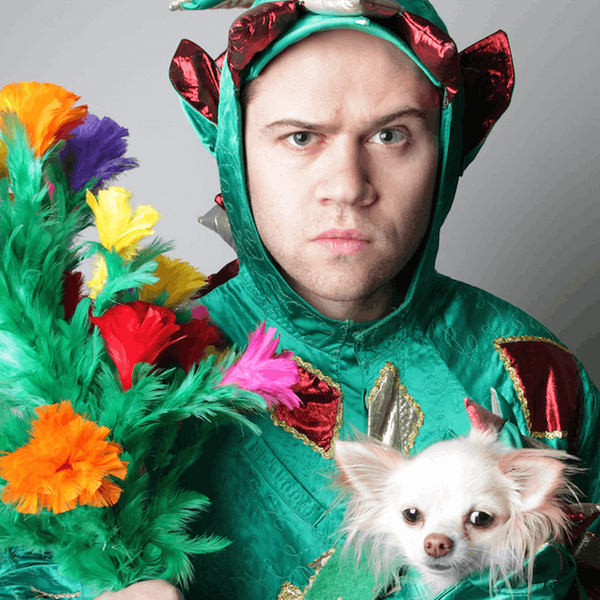 Piff the Magic Dragon (or John van der Put, as his official birth certificate says) shot to instant fame when he appeared on America’s Got Talent Season 10. Walking on stage in his signature dragon attire, which he insists is not a costume, judges and audience members alike were initially skeptical.

Piff’s unique fusion of magic and comedy have helped him and Mr. Piffles sell out shows across the UK, land a gig as the opening act for Mumford & Sons and score a Las Vegas residency at The Flamingo. When we caught up with them backstage in Montreal, they were getting ready to kick off a slew of sold out shows at the world’s biggest comedy festival, Just for Laughs.

When he initially moved from his native England to Las Vegas for a seven-month residency at The Cosmopolitan in early 2014, Piff became enchanted with the city. “I was like, I think I’d like to stay. And I had a green card from doing the Cosmopolitan show, so I thought, well, let’s apply to America’s Got Talent and see what happens.” Apply, he did — and the rest is quite a story.

You probably remember how he changed the judges’ minds almost instantly from their first impressions of him — especially Howard Stern. “The biggest surprise was seeing the reaction from the public and the judges. Having Howard Stern go from rolling his eyes when I walked out to a standing ovation and being able to work with my buddies Penn and Teller from Vegas on the final show — it was those sorts of moments that were really great.”

Piff and Mr. Piffles solidified their America’s Got Talent place in the Top 10, but were cut when the season’s Top 5 were chosen. Don’t worry, though — they weren’t too bummed about it. “We were trying to lose!” he insists. “The whole point was to go on America’s Got Talent and be the loser. As a grumpy little magic dragon, the worst thing that you want to do is have this grumpy magic dragon win. I wouldn’t have an act anymore!”

In addition to the undeniable charm of Mr. Piffles (about which Piff says, “I hope he steals my thunder! That’s one of his reasons for being here!”), one of Piff’s most memorable moments on the show involved surprising Heidi Klum with a kiss. Unfortunately, their love just wasn’t meant to be. “We’re not talking anymore,” says Piff. “She’s out of my reach. She’s too tall. I’d need a ladder and I’d have to drag it with me everywhere I went — forget it!”

There was also the now infamous semifinals trick in which Mr. Piffles was supposedly locked up in a box and suspended from the ceiling. “Heidi came up to me after and she was like, ‘You can’t put Mr. Piffles in a box!’” remembers Piff. “I was like, ‘Of course I didn’t, he’s my costar! It’s magic, Heidi!’”

After calling Vegas home for close to three years now, Piff has no plans of leaving any time soon. “It’s got lovely weather, I get to live in The Flamingo — it’s the dream. Think of the commute; it’s an elevator! Dragons used to live in caves; this is a big step up!” he points out. Can’t argue with that!

In addition to performing at The Flamingo three nights a week, Piff devotes his time to traveling the country, working on new tricks (he tells us it takes two to three years to work on one act) and hiding from avid Pokemon Go players. “People are just running around, throwing these little balls at me in the street, which is quite annoying — I will not be captured!” he declares.

So will he ever shed the costume? “Shed the costume?! I’m a regular magic dragon!” he jokes before concluding: “Who knows what the future holds? I might become a magic performing chihuahua — who knows! But for now, we’re doing this.” And obviously, they’re loving it!

Are you a fan of America’s Got Talent? Tweet us @BritandCo.

(Photos via Just for Laughs)