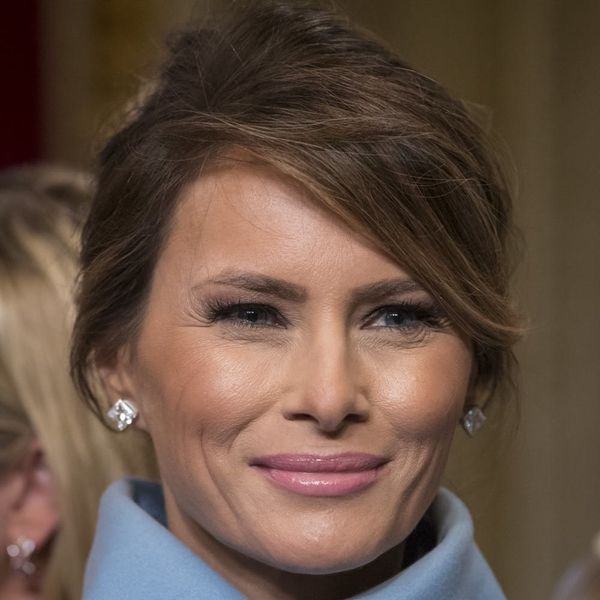 Yesterday was a busy one for the Trumps — between yesterday morning’s inauguration speeches, the signing of the first executive orders (rumored to be centered around Obamacare — gulp!) and last night’s annual inaugural Freedom Ball, all eyes were on the First Family as they made the transition to Washington: particularly with regard to fashion.

Melania Trump, for one, was ready. After making her debut in a powder-blue Ralph Lauren dress, she predictably pulled out all the stops for last night’s ball, and, despite earlier reports that only two big names (Karl Lagerfeld and Ralph Lauren) would dress the First Lady, a third designer has apparently thrown his name into the ring. It was his design that she chose to rock on the red carpet at last night’s event: Hervé Pierre.

Hervé just so happens to be the former creative director of Caroline Herrera — one of the long list of designers that has spoken out about potentially dressing Melania.

“I think that in two or three months [the Trumps will] reach out, because it’s fashion,” she predicted. “You’ll see everyone dressing Melania. She’s representing the United States.”

Hervé, for his part, nailed the design of this vanilla hued (the traditional color worn to the event) slinky column gown with off-the-shoulder sleeves and a thigh-high slit, topping it off with a slim red belt. “It’s an honor to dress the First Lady,” he said in a statement. “I was actually lucky because over my 20 years in the US, I dressed all the First Ladies: Mrs. Clinton at Oscar [de le Renta], Mrs. Bush and Mrs. Obama at Carolina Herrera.”

Yet he doesn’t deserve ALL the credit: WWD reports that Melania herself actually had a hand in crafting the gown. “It was an amazing experience!” Hervé told the outlet. “She knows what she likes… She knows about fashion as a former model. She knows about construction, so we already have the same vocabulary when it comes to designing a dress.”

What’s more, Hervé told WWD that Melania not only knows what she likes (“She has a very strong personal style”), but she won’t be changing that to fit a role, earlier comparisons to Jackie Kennedy be darned.

As for Donald’s daughter, Ivanka, it was Carolina herself who was responsible for the fairy-tale esque-ballgown she waltzed across the stage in.

Nude with embellished crystals and a V-cut neck, Ivanka’s breathtaking frock all but stole the show away from the First Couple, who had their first dance to Frank Sinatra’s “My Way” (a fact Frank’s daughter, Nancy, has spoken out about).

You’ve gotta hand it to them — regardless of your political views, both ladies looked pretty amazing.

What did you think of the First Family’s attire? Share with us @BritandCo!

Nicole Briese
Nicole is the weekend editor for Brit + Co who loves bringing you all the latest buzz. When she's not busy typing away into the wee hours, you can usually find her canoodling with her fur babies, rooting around in a bookstore, or rocking out at a concert of some sort (Guns N' Roses forever!). Check out all her latest musings and past work at nicolebjean.com.
Politics
Style News
Politics