6 Things We Hope Michelle Obama Reveals in Her Upcoming Memoir 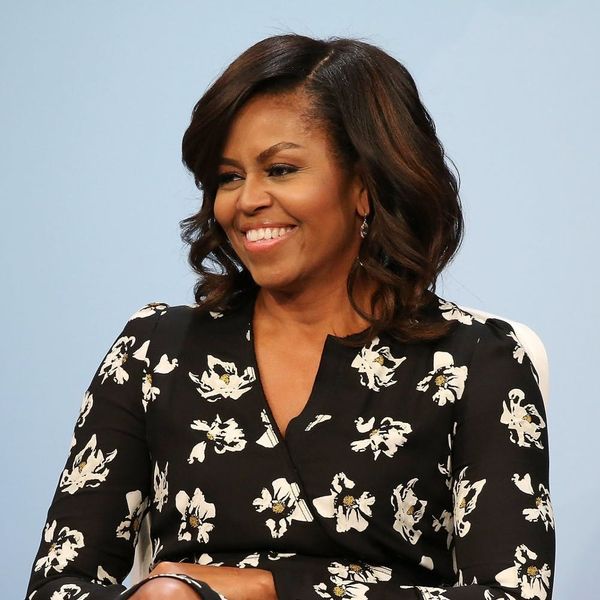 It’s not hard to see why most people believe that Michelle Obama changed the course of American history during her time as First Lady. Not only was she an extraordinary activist on issues that span many facets of social justice, but she’s also a proud mother, strong wife, and down-to-earth woman that just simply resonates with Americans. So when we first learned that Michelle Obama was writing the memoir we’ve all been waiting for… well, let’s just say our inner fangirls swooned HARD. While the details of her book are still under wraps, here’s everything we’d love for Michelle to include in her epic memoir — from Trump to family tattoos.

1. What She *Really* Thinks About the Current Political Climate: While it’s easy to conclude that Michelle Obama’s political stance is largely opposed to the current POTUS’s, she’s been quite closed-lipped about what she really thinks about the Trump administration. But now that she’s had a few months to adjust to life outside the White House, we’d love to hear all of her uncensored thoughts about the current political climate in the US. Hey, a girl can dream!

2. More About Her Early Years With Barack: Even though Barack Obama briefly touched on his own memories of their epic love story in his first book, Dreams from My Father ($16), we’d still love to hear Michelle’s account of the early years between her and her hubby. The Obamas are pretty much the epitome of #relationshipgoals, after all.

3. What It’s Like to Live and Raise Your Kids in the White House for Eight Years: Maybe it’s the mystery of the White House or maybe it’s the fact that she did such a kick-ass job raising her two girls, but it would definitely be interesting to know what it’s *actually* like to call such a prominent piece of American history home. Plus, we’re definitely curious to know how in the world she raised two intelligent and compassionate daughters while dealing with the pressure of being one of America’s most well-loved and criticized public figures.

4. If We Can Actually Persuade Her to Run for POTUS: When Michelle Obama announced that she would never run for President of the United States, many Americans were devastated. We’d love to find out a little more about why she made this decision… and if there’s any hope of persuading her to reconsider.

5. More About Her Humble Upbringing: Michelle Obama resonates with a lot of people because of her humble upbringing as a hard-working young woman who was raised in a tiny apartment on the South Side of Chicago. In her upcoming memoir, we’d love to get even more details about her early life and how her childhood helped mold her into the amazing woman she is today.

6. If She Would *Actually* Consider Getting a Family Tattoo: In a now-famous 2013 interview with The Today Show, Barack Obama stated that if any of his girls tried to get tattoos that both he and Michelle would get the same ones and call it a family tattoo. Even though it was only meant as a parenting joke, we’re honestly ridiculously curious to see what they would get inked!

Are you planning on reading Michelle Obama’s new memoir? Tweet us by mentioning @BritandCo.

Ashley Macey
Ashley Macey is a lifestyle freelance writer who loves all things fitness, wellness, and creativity. When she's not exploring her home in the Pacific Northwest with her dog Max, you'll probably find her curled up with a good book and some hot tea. Follow her daily jaunts on Twitter.
Books
Home News
Books Politics