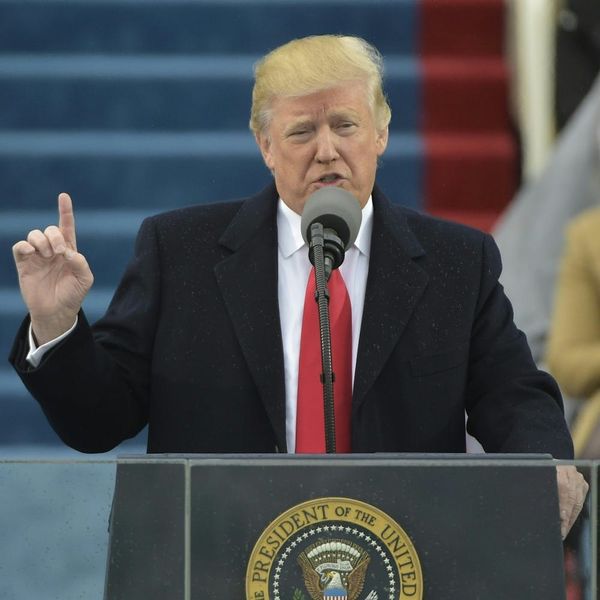 Well, it’s happened. Donald Trump is America’s president and there have been many details to observe, from Kellyanne Conway’s inauguration day outfit to LIT celebrity reactions to the entire political sitch — but now peeps on social media have spotted something amiss. Trump has taken over for Obama on Twitter’s @POTUS account, and though we may have been given an avatar of Donald to stare back at us, in the moments following President Trump’s Twitter takeover there was also a joyous image of patriotic love added as the banner. The only thing is: That’s not love for Trump. It’s love for Obama. Yep, the pic of a crowd full of people is from Obama’s 2008 inauguration and Trump sorta just… reused it.

Though, technically, he’s able to use the pic if his team paid for it, that doesn’t change the fact that things are so seemingly dire at Trump’s own inauguration — at least, attendance-wise — that whoever’s behind the account couldn’t find an appropriate pic of the now-President’s own supporters.

In case you’re curious, here’s the original pic, taken back during Obama’s inauguration…

There’s no doubt that it’s the exact same pic Donald was using.

People all over Twitter noticed the familiar photo, of course, and the banner image has since been changed to one of a simple American flag. Either way, we’ll just have to wait and see how much Trump ends up using @POTUS. For now, he’s still tweeting away on his notorious @realDonaldTrump account.

January 20th 2017, will be remembered as the day the people became the rulers of this nation again.

What do you think about the fact that Trump’s account is using a pic from Obama’s inauguration? Tweet us @BritandCo!

Desiree O
Desirée O is a ‘Professional Bohemian’ who loves anything and everything related to the arts, entertainment, and pop culture. She ADORES being a ‘Newsy’ for Brit + Co, covering all of the latest tidbits of awesomeness that you want to read about. When she’s not writing, she’s either making messy art, going on long adventurous walks with her camera, or poking around over at bohemianizm (http://www.bohemianizm.com/). You can find out about Desirée O and her work at http://DesireeO.com/ or follow her on Twitter @DesireeO.
Politics