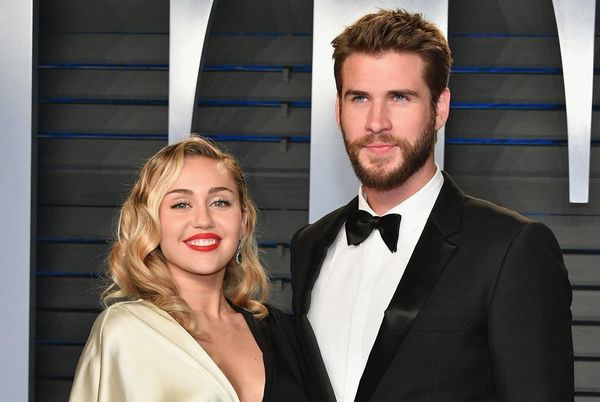 It certainly looks like congratulations are in order for Miley Cyrus and Liam Hemsworth. Days after social media photos of the two sparked wedding rumors, the “Malibu” singer hinted that the rumors were true by posting a series of revealing photos.

In two of the photos — captioned simply “12.23.18” — Cyrus and Hemsworth embrace in front of a fireplace adorned with roses and other flowers. Cyrus wears a white Vivienne Westwood gown, while Hemsworth looks dapper in a dark suit and white sneakers. A bouquet sits on the hearth beside them, and Hemsworth has a boutonniere pinned to his lapel. He also appears to be wearing a ring.

In another photo, the lovebirds share a romantic kiss against a backdrop of flowers and balloons. “This is probably our one-millionth kiss,” the former Hannah Montana star wrote alongside the pic.

This is probably our one - millionth kiss ....

A fourth image, similar to the two taken beside the fireplace, features the caption “10 years later,” a reference to their nearly decade-long romance.

Cyrus and Hemsworth first started dating in 2009 while filming 2010’s The Last Song. They were engaged by 2012 but split a year later before ultimately reuniting in 2016. Soon after, the singer was seen wearing the engagement ring Hemsworth had given her years earlier.

“I think that something that people should understand is … young people, in general, what we wear and what a relationship and a commitment means is very different from what tabloids like to make it mean,” the singer told Ellen DeGeneres of their relationship in 2016. “I think young people have a different idea of partnering … because it’s really sharing a life with someone, and not about a legal paper.”

Do you think this is Miley Cyrus’ way of confirming that she married Liam Hemsworth? Let us know @BritandCo!