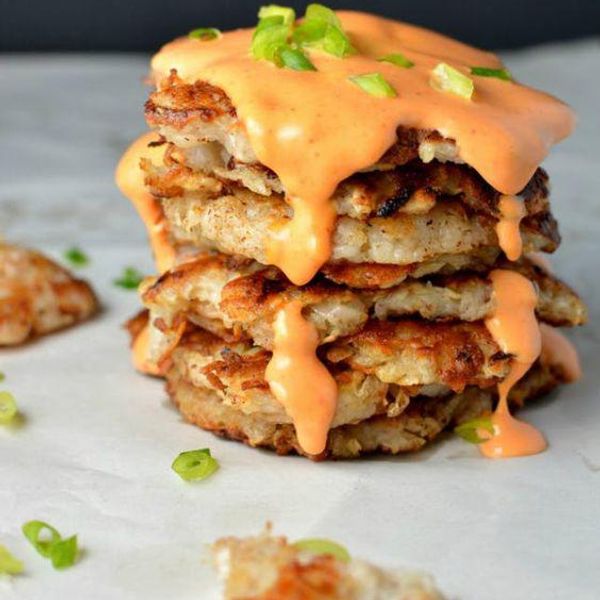 The eight nights of Hanukkah, AKA the Festival of Lights, begin tonight and we say bring on the feast! While potato latkes are seemingly everyone's go-to, there's more than one way to skin a potato. Whether you want to substitute sweet potatoes, carrots, or Brussels, or just get super creative with the sauces (Sriracha, kimchi, or anchovy aioli anyone?), we have a recipe for you. And that's only the beginning. Are you a noodle or a tater kugel gal? Brisket or short ribs? Vegetarian? Gluten-free? Whatever your answer, we've got a dish that will please your palate. Here are 22 creative takes on everyone's favorite Hanukkah foods.

2. Manischewitz Braised Short Ribs With Horseradish Gremolata: Sweet boozy, grapey Manischewitz is balanced by salty beef broth, tomato paste, and herbs and transformed into the tastiest sauce a beef bone ever saw. Make sure you grab a latke (or two) to soak up every last drop of this delicious juice. (via What Jew Wanna Eat)

3. Challah: This recipe should come with a warning. Soft and chewy, salty and slightly sweet, it's so delicious that once you taste it, there will be no going back to store-bought ever again. Prepared for a lifetime of holiday baking? Go ahead, then, and take a bite! (via Delicious Shots)

4. Sweet Potato and Carrot Latke-Linis With Whipped Goat Cheese and Smoked Salmon: Carrots in your latkes? Topped with smoked salmon and chives, these babies are clearly not the usual fare. Everyone will be SO impressed with this rustic and creative interpretation of their traditional holiday fave. (via A Clean Bake)

5. Chocolate Chili Rugelach: What's not to love about a rich cream cheese dough that's filled with goodness and rolled up like a little croissant? Traditionally, rugelach are filled with nuts and jam, but this recipe calls for chocolate with just a pinch of cayenne that takes them to next-level amazing. (via What Jew Wanna Eat)

6. Jelly Doughnuts (Sufganiyot): If deep-fried yeasty dough is essential to your holiday lighting ritual, you're going to love this recipe. While these are filled the customary way, with jam, you can sub any filling you like, including Nutella, butterscotch, caramel, pastry cream, lemon curd, and so on. (via Pretty Simple Sweet)

7. Potato and Beet Latkes With Kimchi and Sriracha Aioli: The kimchi in these latkes packs such a hit of pungent flavor — sweet, spicy, and salty — that you won't need to do much more to season them. But it's that final dollop of Sriracha aioli that's simply irresistible; don't even think of leaving it out. (via Little Kitchen, Big World)

8. How to Make a Savory Kugel Without a Recipe: If you grew up loving your bubbe's kugel but didn't inherit the recipe, this holiday-friendly casserole is easy peasy and oh-so-good. While some kugels are made with potatoes, this one's dense and rich with egg noodles. One bite and you'll be in cheesy-noodle heaven. (via Food52)

9. Homemade Hanukkah Gelt: These gold-dipped chocolate coins are super simple to make, and look (almost) too pretty to eat. The secret is edible gold luster dust that you brush right on top of the cooled chocolate. (via Oh Nuts)

10. Taro Latkes With Sriracha Lime Cream Sauce: Starchy taro makes latkes that are even crisper than the potato originals. The Sriracha and lime cream sauce is so tangy and delicious, you'd better make a double batch, because everyone will want to nosh. (via Builicious)

11. Slow Cooked Beef Brisket: Brisket is one of those seriously underrated cuts of beef that's cheap enough to feed a crowd and perfect for slow cooking in the oven or crock pot. This recipe is served on a bed of mashed potatoes and kale, but feel free to serve it up with latkes. (via My Fussy Eater)

12. Strawberry Challah Bread Pudding: Soft, buttery challah smothered in vanilla custard and strawberry sauce is the ultimate sweet finish to your Hanukkah dinner. Better put on some stretchy pants, because the leftovers the next day are twice as good. (via Mitzy at Home)

13. Savory Sufganiyot With Swiss Chard and Raisins: Stuffed with freshly sautéed veggies, sharp feta cheese, and herbs, this savory doughnut recipe is so delicious, you'll be starting a new tradition. (via The Little Ferraro Kitchen)

14. Gluten-Free Vegan Noodle Kugel Dessert: If you thought a good noodle kugel is basically gluten, eggs, sugar, and dairy in a serving dish, you're in for a sweet surprise. This modern take on the traditional dish is vegan, gluten-free, dairy-free, egg-free, and refined sugar-free — so it's something everyone at your table can enjoy. (via Unconventional Baker)

15. Hanukkah Baked Veggie Tots: These little bites of goodness are just like the tater tots you loved as a kid, but dressed up with Parmesan cheese and panko breadcrumbs. It's a great way to use up any leftover veggies you have on hand. (via Brit + Co)

16. Challah Bread Pudding + Vanilla Creme Anglaise: You're already making the challah, so bread pudding is the natural progression. Just add walnuts, pecans, and raisins (or better yet, bourbon-soaked raisins) and it's ALL good. (via Hey Modest Marce)

17. Grandma's Noodle Kugel Makeover: Cheese, noodles, graham crackers, and cinnamon — does that sound like your bubbe's kugel? This version swaps out full-fat cheeses for low-fat, nonfat Greek yogurt for sour cream, and coconut oil for the stick of butter, but it tastes so cinnamon-y good that no one will ever know the difference. (via Healthy Recipe Ecstasy)

18. Zengoula (Iraqi Funnel Cakes): These squiggles of deep fried dough known in the Middle East as zengoula (or jalabi), celebrate the oil-light miracle of Hanukkah. The out-of-the-ordinary shape makes a fun change from traditional jelly doughnuts, and the tart lemon syrup is out of this world. (via Food52)

19. Gluten-Free Brussels Sprout Latkes With Anchovy Aioli: Move over, potatoes; these gluten-free latkes feature a new vegetable star: grated Brussels sprouts! Brussels are a much dryer vegetable, and as any yenta knows, the less moisture in the batter, the crispier the latkes. (via Feed Me Phoebe)

20. Potato Kugel Cups: These kugels in a cup just make so much sense. Now every piece is a crusty corner, and no one has to compete to get a *crunchy* slice. (via Joy of Kosher)

If you just love a clever take on a traditional Hanukkah dish, follow us on Pinterest for more!

Sally Jones
Sally Jones is a writer and editor living in New York City. She has worked at many websites including iVillage, Ladies Home Journal, More, Parenting, Cosmopolitan, The Knot and YourTango, in jobs ranging from editor to COO. Renovation and interior design are her unhealthy obsessions hobbies. She has renovated every home she's lived in, including the rentals, and like... whoa, who does that? You can catch her at her blog Renov8or.
food
Food
Hanukkah holiday Holiday Party Holiday Recipes recipe roundup food trends food
The Conversation
More From Food