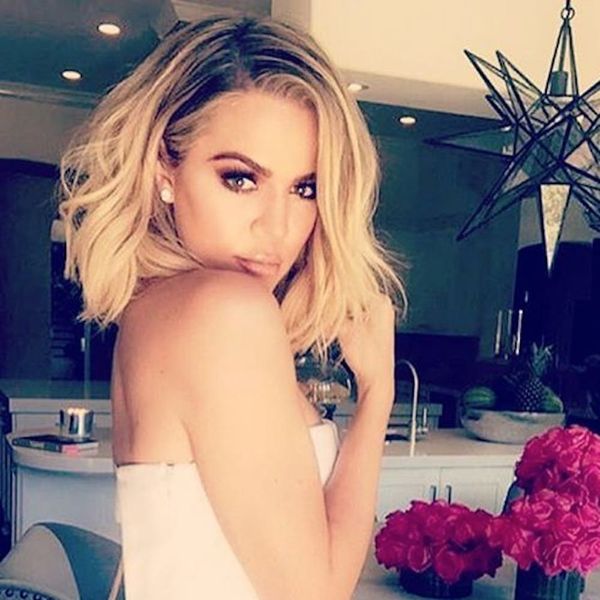 TGIF! Settle into your weekend with these top news items from this morning, from another entry into the unrealistic female beauty standards debate to some weird new baby name trends, plus more.

First I'm too fat and now I'm too skinny. I love this game!!

1. Khloé Kardashian fires back at critics for saying she’s gotten too skinny. Our Kardashian soul sister has worked hard in the gym and changed her eating habits to drop 40 pounds and enjoy a trimmer and fitter physique, and now the transformation is reminding Khloé just how ridiculous the beauty standards that women put up with every day really are. “Never would I have ever thought I would be in the media for being ‘too skinny,'” Khloé tweeted, referencing criticisms of her body when she was also 40 pounds heavier. “First I’m too fat and now I’m too skinny,” she said, followed by a sarcastic, “I love this game!!” It perfectly underlines not only the impossible task of making others happy, but the constant scrutiny and uninvited commentary women put up with. You go, Khloé.

2. Halsey reveals she had a miscarriage on tour and had to go on stage hours later. In an emotional and revealing interview with Rolling Stone, the pop star says that she got pregnant in 2015 on her Badlands tour, but her stressful lifestyle of traveling and overworking likely led to the miscarriage. She and her team decided not to cancel the Chicago show for that same night, and Halsey says she gave the angriest performance of her life, feeling afterwards like she wasn’t human anymore. It’s had a lasting effect on Halsey, who honestly admitted that “I want to be a mom more than I want to be a pop star. More than I want to be anything in the world.” (Photo via Kevin Winter/Getty)

3. Take note: Jenna Dewan Tatum has some family advice for all of those who consider her and Channing #relationshipgoals. Admit it: We all aspire to be as in love and adorable a family as these two, and in a new interview with People, Jenna admits that even the most perfect pair themselves need hard work and effort. “I think it’s important to be conscious about giving everyone equal attention,” she said on balancing being a wife and a mom. “I’ll think, ‘Okay, I’ve been with my daughter a lot, so Channing and I need a date night. Some days I am better at it than others, but I just try to figure it out. Like everyone else! But I do think it’s important to consciously think about it.” *Furiously takes notes.* (Photo via Pascal Le Segretain/Getty)

Hey all! It's @madison.utendahl, @museumoficecream 's Social Media Director, I'm back to give you the inside #SCOOP on The Museum of Ice Cream. We are obsessed with our sprinkle pool. Here's another POV! 🍦 #MOIC #museumoficecream #icecream

4. There is now a museum dedicated to ice cream, and it is what summer dreams are made of. Before we go any further, we should disclose that this bad boy is already entirely sold out for its month-long pop-up, but following the adorable Instagram is just as good, right? Look at that SPRINKLE POOL! The Museum of Ice Cream will open this weekend in NYC’s Meatpacking District, and the month-long interactive pop-up promises to be a “lick-able, likeable, shareable ice cream-centric experience throughout August.” We want to go to there.

5. Because it is Friday, please enjoy this gratuitous video of teeny fluffy new baby tiger cubs at the London Zoo. Because you deserve it.

6. Quote of the day: “When there are no ceilings, the sky’s the limit.” Hillary Clinton in her DNC speech after officially accepting the Democratic nomination for President of the United States last night.

Do you have any big summer weekend plans? Let us know on Twitter @BritandCo!