Morning Buzz! The Final Five Had a Better Time at the VMAs Than Anyone Else + More 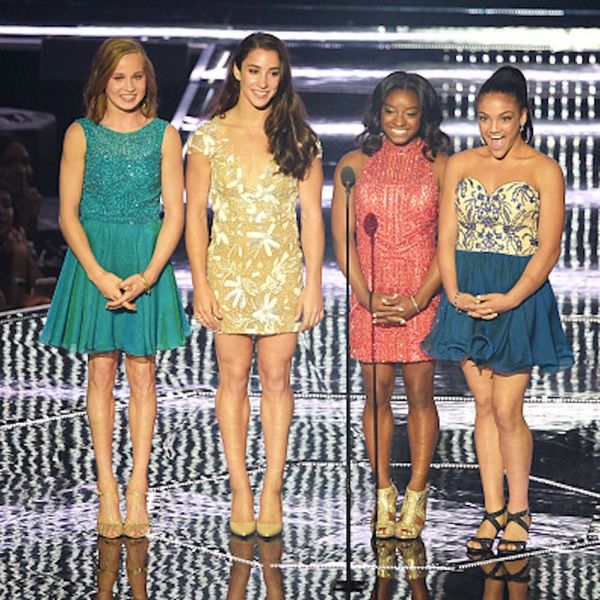 1. The Final Five may be Olympics heroes, but even THEY can’t believe they just got to meet Beyoncé. Simone Biles, Laurie Hernandez, Aly Raisman and Madison Kocian went to the MTV VMAs last night (Gabby Douglas unfortunately had to miss it due to an allergic reaction and hospitalization), and they spent the evening taking selfies with some of their favorite celebs, like any reasonable teenager would do. But it was when they took the stage to present Beyoncé with the Best Female Video award that their fangirl levels peaked. Just look at Laurie’s face! TOO CUTE. (Image via Giphy)

2. Ashley Graham’s new asymmetrical bob was a low-key red carpet highlight at the MTV VMAs. Who needs long locks? Ashley showed off a dramatically shorter new hairstyle on the VMAs red carpet last night, not unlike what we saw Hailey Baldwin do a few days ago. Is the lob the look for fall? Ashley’s “wet look” hair and see-through dress were right in line with the other standout red carpet trends that, even in their glamor, seemed to favor minimalism. (Photo via Jamie McCarthy/Getty)

3. This girl got to dance near Beyoncé during her VMAs performance and her reaction is PRICELESS.Captured by Cosmo, this girl on first glance actually seems to play it WAY cooler than we would ever be able to. But a closer look reveals she is most definitely **screaming inside.**

4. Bea Arthur’s shelter for LGBT Homeless Youth will open next year. Even though the Golden Girls actor died in 2009, Bea Arthur left $300,000 to New York’s Ali Forney Center (AFC), giving shelter to LGBTQ youth in need. They’ve just announced that, next year, they plan to open a new 18-bed shelter. Golden Girls: Always ahead of their time. (Photo via Frederick M. Brown/Getty)

*Logs on Twitter*
Me: Lol why is McChicken trending?
*Sees video*
Me: pic.twitter.com/971FIDVoB1

5. DO NOT LOOK UP WHY MCCHICKEN IS TRENDING. You have been warned. If only we could have warned all the Twitter users who, like us, decided to explore the trending topic about the delicious salty sandwich. Hint: A guy ~has relations~ with his sandwich. Everyone basically reacted as above. RIP eyeballs. Nice knowing you.

6. Quote of the day: “I am Kanye West. That feels really great to say, especially this year.” Kanye was less controversial than expected, given his four-minute free reign at the MTV VMAs.

Were you surprised by Kanye’s restraint? Let us know over @BritandCo!