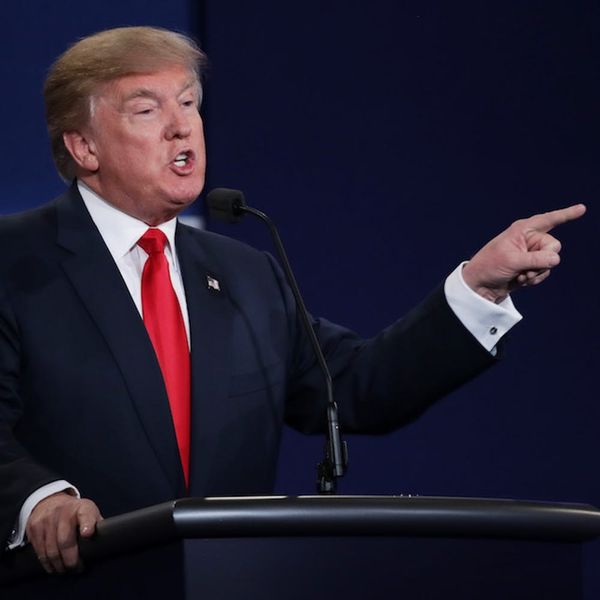 Hooboy — from more debate drama to some uplifting news for the holidays, check out six of today’s top news items below.

I hear the bathrooms in Trump Tower are being relabeled "Bad Hombres" and "Nasty Women."

1. The one good thing is, that was the last debate we’ll have to be subjected to before the election happens. But the bad thing is — well, there were many. For starters, when Trump was discussing illegal immigration, he said, “We have some bad hombres here and we’re going to get them out.” Cue Twitter meltdown number one. And toward the end of the debate, Trump interrupted something Hillary was saying to whisper that she was a “nasty woman” into the mic. Nice try on that one, Trump, but Twitter has already reclaimed it.

2. Olivia Wilde shared a sweet mother-daughter moment with newborn Daisy and it is TOO CUTE TO HANDLE. Olivia didn’t wait long before sharing the first pic of her and Jason Sudeikis’s second baby, and now we get another adorbs one already. The pic was captioned with a simple, peaceful-looking emoji face, which is exactly how we feel just looking at it.

ladies and gentlemen, it’s the moment we’ve all been waiting for all month long… today on the blog @laurenconrad is revealing what she’s wearing this halloween! click the link in our profile to get the step-by-step tutorial for lauren and her friends' pastel circus performer costumes {and see way more photos from behind the scenes of the making of these costumes, too!} 📸: @valoriedarling

3. Lauren Conrad’s latest Halloween costume DIY will have you reaching for the scissors and glue STAT. Lauren is no stranger to epichomemade Halloween costumes, and this year is no exception. She debuted the pastel circus performers costumes on her Instagram and blog, saying she “came up with this idea a few months ago when I saw this sequin star dress from Valentino’s Star Studded collection.” Beauty!

4. Whoa: There might be a breastfeeding emoji soon! Registered nurse Rachel Lee has submitted a proposal to Unicode, the overlords of emoji, to include a breastfeeding emoji in the keyboard, notes People. “I propose adding an emoji for breastfeeding as a complement to the existing baby bottle emoji, and to complete the set of family emojis,” she writes. “The lack of a breastfeeding emoji represents a gap in the Unicode Standard given the prevalence of breastfeeding in cultures around the world, and throughout history.” She also quoted an Emojipedia survey claiming that breastfeeding was one of the most-requested emoji in 2016. If the recent women-friendly upgrades to emoji we’ve been seeing is any indication, this might not be too far off.

5. Get ready for it: Hallmark Channel has just revealed FOUR more brand new Christmas movies. We know, we know: Halloween isn’t even over yet! But while we relish in the dwindling fall days, we might as well start mentally prepping for the holidays. According to Cosmo, Hallmark’s four fresh films will star the likes of Lacey Chabert, Melissa Joan Hart, Kristin Davis, Candace Cameron Bure and Lori Loughlin, and so many more. You can check out Hallmark’s full Christmas movie lineup here. (Photo via Hallmark Channel)

6. Quote of the day: “Did I run the best campaign? I ran the best campaign. The best. No one had ever seen a campaign like mine before. Huge crowds. Babies, signs, cheering, hats. And now I don’t get to be president just because Hillary got more votes? I don’t think so.” Someone wrote a note-perfect Donald Trump concession speech and we’re crying.

What’s your favorite Christmas movie? Let us know over @BritandCo!